Before the New Leaf: Welcome Amiibo update was released, I was slowly but surely working towards a new dream address update for Citàlune, and as a result, was trying not to shout about every single little change and addition I’ve made to my town too much. But now that the Welcome Amiibo update has dropped, I don’t want to continue to be completely silent from posting about my town and experiences, especially since now it’s looking like I have more work to do before updating my dream address than I did before (like more item collecting).

This sun mosaic path I’m about to share about was one of the things I was once hoping not to share too much about before updating my dream, but since I plan on doing more New Leaf posts here and there, it would be impossible to continue to hide my town’s main path. So I would like to introduce it here in this post first, and tell about the long road to get to the finished version! 🙂 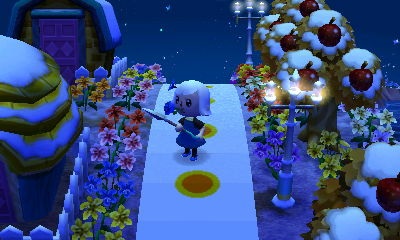 My idea for a mosaic path representing my town’s sun/moon theme goes pretty far back; this was my first feeble attempt in starting to work on it back in Citàlune’s first winter of 2013-2014! But after seeing how much work it would be, I got cold feet and put it off, instead using the winter version of my fairytale-bridge-inspired path. And then in the spring following, and for quite a while after, I used a warm-up mosaic path I made inspired by the in-game mosaic carpet & wallpaper.

The baby steps from winter 2013-2014 never went anywhere; I erased them. But these are the first baby steps later in 2014 that eventually went somewhere!

Continuing to work on the outlines of the mosaic.

The outline was done and I started filling it in with color, which would prove to be the most difficult part by far.

I actually thought the colors looked pretty cool at this point, when it was only halfway colored.

But then when I used those colors all the way through, it looked so awful! D: I wasn’t happy with it at all and knew I had a lot of work to do on it still, and was determined to get it right.

After some color tinkering, it was already starting to look better — this is my favorite picture of the path in its early stages. But I still thought it was a little too busy-looking, and that the transition from the outer blues and purples to the middle pinks and oranges was not very smooth, which was distracting.

Blech, the lack of color harmony of this stage of the path with the flowers next to it was really hard for me to look at! It’s all so loud, dark, busy, and not harmonious. I was starting to get discouraged at this point…

And it looked even worse at night, the oranges growing dull and the blues sticking out too much. 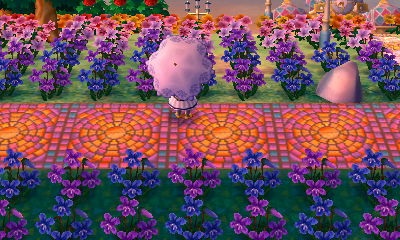 Finally, I was starting to feel a little better about the colors after some tweaking, and hope returned to me a bit. 😛 Mellowing the colors more is exactly what was needed, and it’s still plenty vibrant! Though if you look closely, my final version of the path you’ll see later has more blues and purples on the edges, so while this stage here was big progress, it wasn’t the final product.

I felt good enough about the progress of the main 2×2 pieces of the mosaic path to start working on the 2×1 pieces in the middle that are necessary in order to end the path on an odd number of spaces. In the end I’m not sure what was more difficult, figuring out the coloring for the 2x2s, or figuring out the design and coloring for the 2x1s, which gave me quite a headache as well!

For instance, I worked quite hard on these 2×1 drafts above — on both the mosaic design and on tweaking the colors – and they all ended up being scrapped completely. Though they did, through trial and error, give me an idea of what would work and what wouldn’t.

This was the least-terrible result that my early drafts of the 2x1s produced, but there was still something that bugged me a lot: I thought that the 2x2s and 2x1s didn’t match with each other very well (both in color and design), and that the 2x1s took too much attention away from the 2x2s. But I didn’t want the 2x1s to be a boring waste of pattern slots either, and wanted the design to add to the theme of the path, so it was all very confusing and challenging… I put this path on the back-burner for a long time because I was starting to get burnt out, and played AC:WW instead for a while.

Finally I came back to the path and finished it! 😀 The key to the 2x1s working out this time is that the design of them very much mirrors the 2x2s, but instead of the sun being in the middle of the tile, there are suns ‘setting’ on both ends. So the similar designs of the 2x2s and 2x1s made the path look more harmonious together and less busy/distracting, but the different positions of the suns added a little visual variety/interest and contributed to this side of town’s sunset theme. 🙂

And this final version of the path has the added bonus of looking pretty good at night as well! Having a sun mosaic path that looks its most warm and vibrant during the sunset, and at night melts together in this cool luminosity, is the perfect win-win solution for my town’s sun/moon theme ^^ 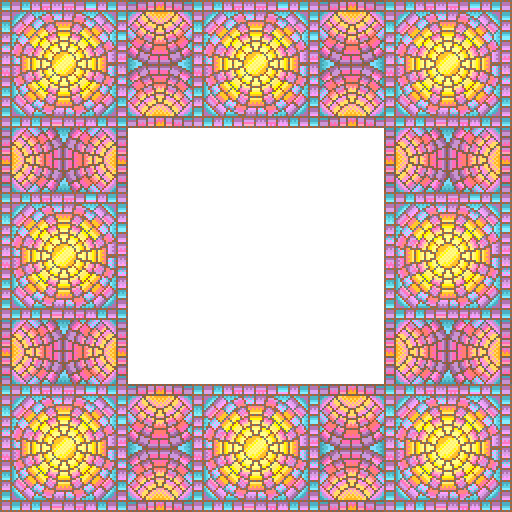 And lastly, a neat little graphic of it~

It might sound silly, but I can’t describe how happy I am to finally walk along this path and not feel nitpicky thoughts, to feel completely content with it after all the discouragement and frustration I felt in making it, at times wondering if I just wasn’t good enough to make the sun mosaic path I dreamed of for my town. Finishing this path, and finishing my AC:WW re-landcaping project, has helped remind me that I can still complete a big AC project like this if I set my mind to it, even if it takes longer for me than it used to.

I hope I can take this feeling with me as I continue working on all the other new patterns I need to make, like a moon mosaic path for the other side of town, and other patterns that are a bit of a mystery to me at this point. (This path takes up fewer slots than my previous ones, so I have a lot more opportunities for making and using more patterns!) I have a feeling that making the moon mosaic path might end up being the opposite experience to the sun one: the composition of the moon path will be hardest, since I plan on the pieces being more irregular-shaped, and figuring out the colors will be easiest (mostly grayscale, with the lightest blues and purples). But as the road to my sun mosaic path showed me, with enough trial and error and analyzing what’s wrong and how to fix it, I can hopefully get where I want to be eventually! 🙂 And I also hope that if I’m a little more single-minded and clear-headed, and less easily discouraged and distracted, the moon mosaic path won’t take as long as the sun one, we’ll see 😛

17 thoughts on “The road to my sun mosaic path”