My new neighbor is Olivia, who happens to be the first Animal Crossing villager I ever met, back in the GameCube version! She’s always been one of my favorites for that reason, and also because her eyes are so big and expressive. I’d rather have new favorites in my new towns than old favorites, though, so I’ll probably let her leave eventually. It’ll be really nice to have a familiar face like hers in town for a while, though! ^^

See what I mean about her eyes being expressive ❓ : 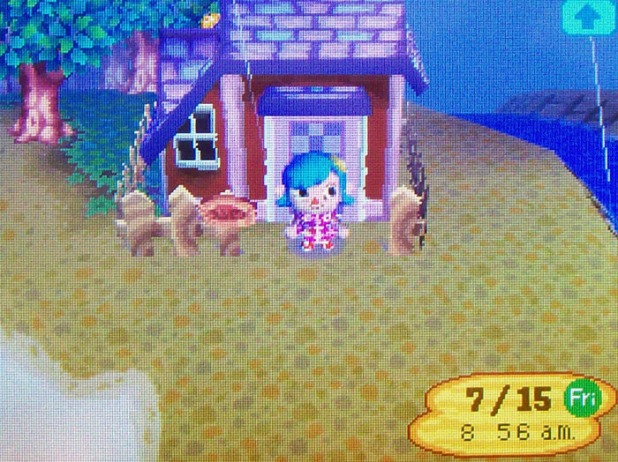 I don’t blame her, I probably would too! This might be the nicest house location in Dafdilly, nestled between the river, ocean, and cliff-side.

Olivia’s interior after she unpacked at midnight. She’s always had classy décor 🙂

This is what my house looks like after its left wing expansion, and with a pink roof — I quite like it, it’s a cute look with the assymmetrical roof. 🙂

I could tell it was going to be something good by the fish shadow! 😀 That green tile is there because I was planning where a path would go on my “island,” connecting the two bridges.

I was sent a lily-pad table for reuniting Katie with her mother in the last post, which is good since I’ve never had one before, but I was hoping for a lovely phone. Been wanting one since AC:GC!

Edit: For about a day I thought I had found the right town for Trildale (I even made a blog post about it, then deleted it — sorry about the confusion!), but the fact that it was missing one of my favorite house exteriorswas really bothering me. I didn’t want to feel that nagging regret whenever I played in the town, so it’s back to resetting. I’m willing to reset for weeks if that’s what it takes to find the perfect town for Trildale. I will never reset Dafdilly, though; I’m 100% happy with it. 🙂

6 thoughts on “New neighbor in Dafdilly”