I’m pretty close to being able to do an “End of December” post of my town’s happenings, and to make that post a bit less huge, I thought I would have a separate post on the WiFis I’ve had lately — lovely visits to Miagen, Citàluna, and Arcadia. 🙂

To start off with, a WiFi I had with Cassidy in Miagen a fairly good while ago (so her town probably looks much different now than it did in these pictures!). She was kind enough to give me a stewpot, an igloo-exclusive item that I wanted for my dining hall, since I don’t have the campsite built in Citàlune. Thanks so much for that, Cassidy! 😀 I gave her the few horoscope items I had at the time in return. 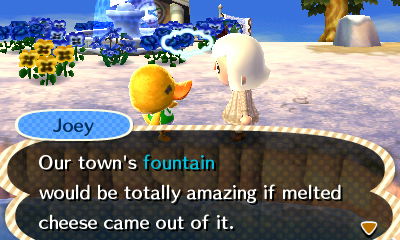 Chatting with Joey, who’s originally from Ryann’s town Shantaki! I thought I met him there once, so I was a bit surprised that he didn’t remember me and had to re-introduce himself.

Ahh, this log cabin looks so fitting in the snow!

nd inside was this amazingly creative snowy outdoor café!

I loved the feel of this room (in a different house). It’s like a mysterious deep-sea grotto filled with ancient treasures and home to mermaids! But I don’t know if she was going for that feel, it was just my impression! ^_^ 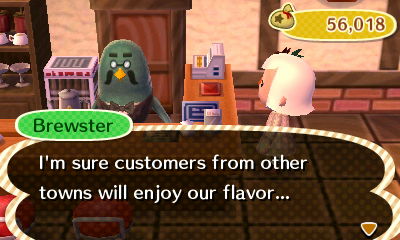 And lastly, I made sure to get some coffee to-go before I left, as I like to do in other towns, since there’s no café in Citàlune. Thanks so much for the stewpot and having me over, Cassidy! 😀

Another WiFi I had, a bit less distant (around a month ago), was with a new friend with a new town, Lenore in Citàluna! Our town names are similar, but we had different reasons behind naming our towns. I named mine as a compromise since I couldn’t use Cittàgazze (went into it all in this post), and she named hers after the cat in Sailor Moon, Luna.

I gave her some presents of furniture and stuff to help her get started in furnishing her rooms, and she gave me a bunch of perfect pears and a balloon hat — thanks! 😀

That’s Luna the cat on the town flag, and I think other cats from Sailor Moon(?) on the ground. 🙂
Later Edit: Ah yes, that’s Artemis and Diana! I hadn’t seen Sailor Moon yet when writing this post, but I started watching in 2016 and became a big fan! xP 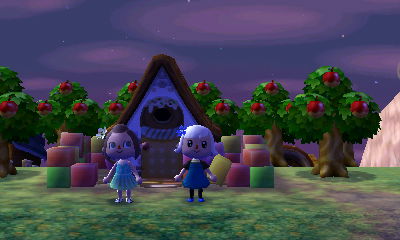 She’s going for a theme in her town and her houses representing the four seasons, and this candy house is for the Fall season (probably my favorite season, personally ^^)! I love how well the apple trees complement the candy house!

This mermaid house fittingly represents summer and it overlooks the ocean. 🙂 I remember thinking pre-game that the three definitive house exterior styles for a fairytale town (in my mind) would be the fairytale exterior (of course), the mermaid exterior, and the candy exterior. So I think it should be very fitting to have those latter two exterior styles in a fairytale themed town, in addition to matching the four seasons concept! 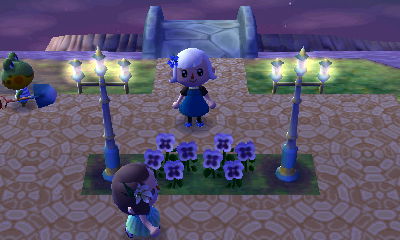 I really liked this path layout with the little gap inside for streetlights and flowers! And yay, someone using my paths! 😀

Lenore’s house (which is actually a castle already!) represents spring, and there are flowery patterns around the entrance fountain to add to the spring feel.

Inside I was jealous of all the princess furniture, so pretty! Especially the canopy bed — one day it will be mine >:]

We spent a lot of time chatting, looking around town, and browsing the shops, but eventually it was time to go. Thanks so much for having me over, Lenore! 😀

A very recent WiFi I had (just last weekend) was with Teru (Rain) and Jessica in the former’s town Arcadia! We all had various gift exchanges/trades to do with each other, so it seemed like a good idea to get it done in one WiFi. ^_^ I’m really grateful to have the latest horoscope DLC releases thanks to you two, along with the other gifts, thanks so much!! 😀 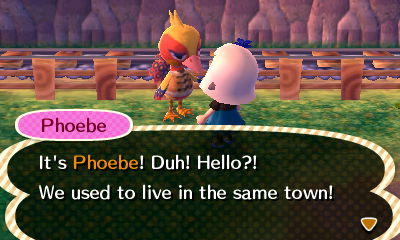 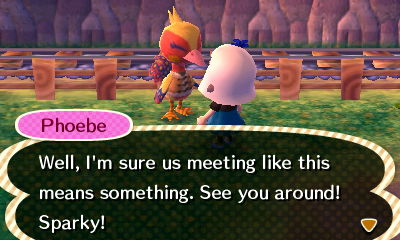 Took some time to greet an old neighbor of mine (and who was originally from my dad’s town), Phoebe, who seemed to think I wouldn’t remember her. But of course I do! 🙂 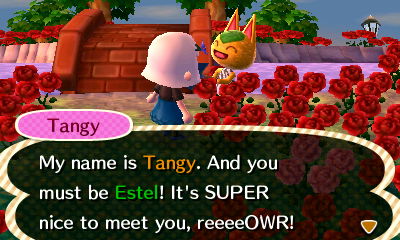 And also Tangy, who I remember fondly from my first town in the GameCube version! I remember my younger self being very jealous of her fruit furniture. xP My tastes have changed a bit since then, haha, I can’t say the fruit set furniture is my #1 favorite anymore (it is cute, though!). 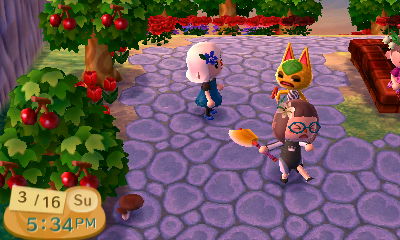 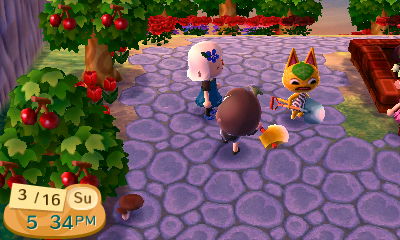 Jessica suggested an axe fight and Tangy seemed quite distressed about it! 😛
(lol, her face was frozen like that! I’d heard of that happening to others, but never seen it happen before myself) 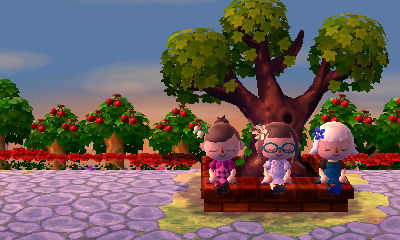 Now for a peaceful moment sitting under the town tree ❤

Jessica had to go after that, but I thought I’d stay to sight-see a little while longer and grab my usual cup of coffee. ^_^

The lighthouse looked so gorgeous across the river (and waterfall) at sunset, coordinating both with Tangy’s house and the bridge, and contrasting with the cool-colored violets!

And this beautiful wisteria trellis park filled with roses! It’s fun to walk around and around the square formed by them 🙂 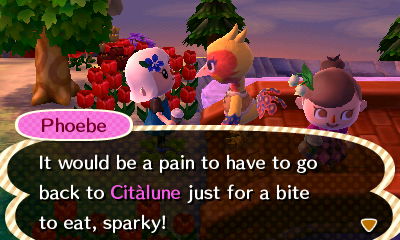 Talking with Phoebe some more on the bridge. It was cute for me to see her mention her old town!

Getting a bite to eat in Rain’s house before leaving ^^ Thanks so much for having me over, Teru, and to both her and Jessica for the gifts! 🙂

I also wanted to say that I’m sorry to the people who have been wanting to WiFi and hasn’t worked out yet. >_< I hope we can find a time soon! I could start having people over to Citàlune again, since I've made it more presentable and cleaned up most of the mess now.