Hey everyone, I hope it’s been a great new year for you all so far!

I’m really sorry I haven’t been able to do much for my blog since changing my URL. 😦 Since starting up school again, with classes, homework, and other activities, my days have been very full and it’s been hard for me to find a lot of time for Animal Crossing related things. Usually I’m reluctant to post unless I have lots of pictures of one of my towns, but I feel like a little update is necessary since it’s been so long.

In my last post, I hinted that a return to playing AC:WW regularly again was a possibility, but that I hadn’t decided yet, with AC:3DS coming out in the not too distant future and all, and my town being months behind. Well, I decided recently that I do want to start playing in my AC:WW town again and posting about it.

Whenever I say my town is behind, I mean that for a number of days (or months :oops:), I didn’t play AC:WW. And when I want to play again, I set the DS date to the last day that I played to prevent neighbors from moving away and flowers from dying. So when I’m behind in time like this, to catch up, I time-travel forward one day, play that day, time-travel forward another day, play that day, and so on until I’m at the present day. But this time, I felt my town was just way too far behind to catch up this way, so I decided to just set my town to the present without playing the days in between.

You might wonder, “What about the neighbors? Won’t they all move away if you time travel months ahead?” Actually, if you time-travel forward a long period of time, you should only have to worry about one neighbor moving away. Time travelling forward any length of time = only one day passing as far as neighbors moving away are concerned. I knew it would be Maelle who’d move away because she was packed up before I time-travelled: 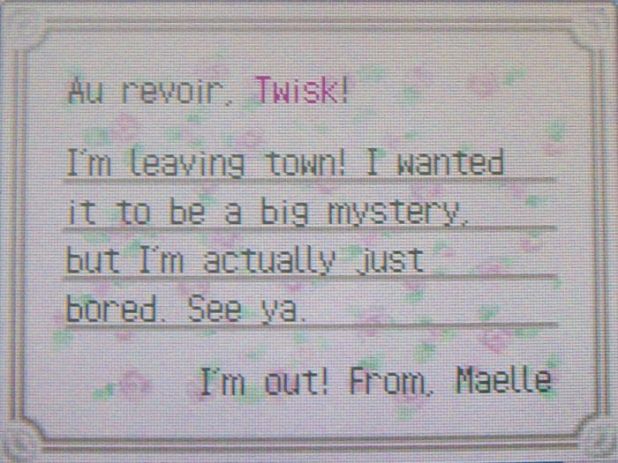 I also didn’t have to worry about flowers because I’d packed them up a long time ago because of dead spot testing and hadn’t put them back in town yet.

So all I had to worry about was… 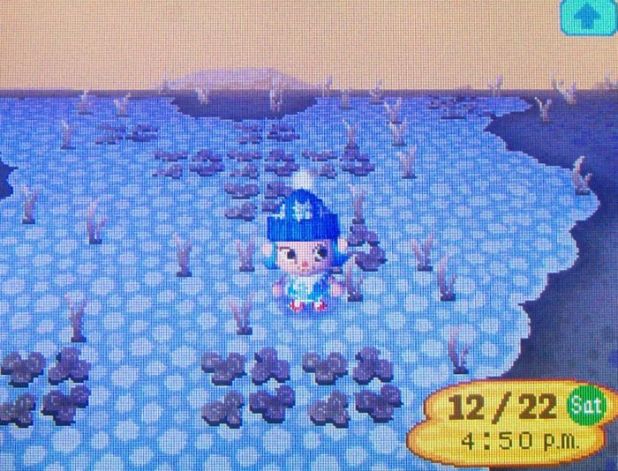 …lots and lots of weeds! It’s not very fun to pull that many, but if you’re focused, it doesn’t take forever.

And on the plus side, I found three four-leaf clovers! 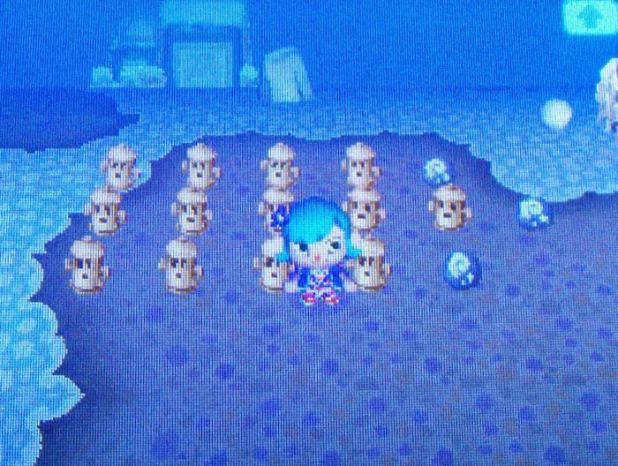 And lots of gyroids. As you can see, only three fossils were to be found after all that time; this is because you can only have three fossils buried in your town at once, so it’s important to dig them up each day in order to get new ones. New gyroids are planted after any day it rains or snows, so they accumulate over time.

My neighbors were of course concerned about what had happened to me during my long “vacation.”

A new neighbor moved in to replace Maelle: another snooty, Whitney.

Then Tabby moved out. I’m eager to see who will replace her… a favorite peppy, like Rosie? 🙂 Pleeeeaase?

All this was happening during my winter break, so I got a holiday greetings letter from Mom. I hope you all had a happy holiday season as well!

I thought it would be cool to decorate my town with Christmas patterns, but I didn’t start making them soon enough. I only had a few days to make patterns and I didn’t get very far because I was busy spending time with family and such as well. This is the path I started to make, and didn’t finish (no point now):

It’s supposed to be hedges or holly bushes (not enough greens on the palette to really differentiate between the two, anyway) covered with snow and decorated with festive tinsel and ornaments.

It didn’t turn out as good as it looked in my head, but one thing I liked about it was that I made multiple patterns for the horizontal border pieces: one with a present, one with a candy cane, and one with a stocking. I think it adds nice variety to the path:

I’ll admit now that my town has gotten behind again. 😛 I set my town to the present on December 22nd, started to work on the festive path, but on December 25th time became frozen again. The reason why I’m not letting time pass normally is because I want to landscape and decorate my town again before New Years Eve in my town, when the cedars are all lit up. I know it sounds stupid, but it’s my game, and I can play it how I want to. xP

The patterns I’m planning on decorating my town with are candy-themed. I know… again? 😛 But I had already made these main paths and side paths a long time ago (and I’ve never used them in Dafdilly before), so it will save me the trouble of having to make new ones right away: 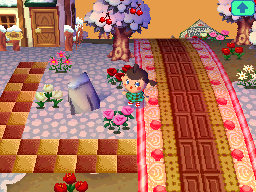 A different side path: 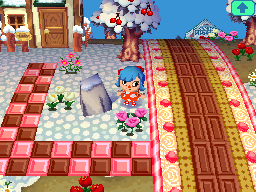 And to make this post less boring, I’ll share a few more candy-themed patterns I made a long time ago, but can’t use for my town right now because they were meant to blend in with the summer ground. 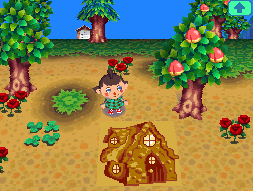 This is supposed to be a peanut brittle house. I’m also working on a gingerbread house, and I hope it turns out better.

I based my peanut brittle house on Gramma Nutt’s from CandyLand. 😛 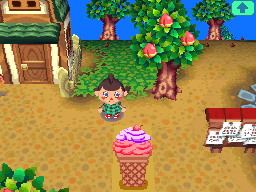 And here’s an ice cream cone I made to sort of blend in on the summer dirt. Like the peanut brittle house, it was done on palette 5, an interesting palette because it contains a color that sort of resembles the summer dirt, but not as exactly as the colors on palette 12 do. On palette 12, I could have maybe used a grass background, a tan/brown cone, and turquoise ice cream to make a summer ice cream cone pattern, but I thought the colors on palette 5 would be funner with the pink and purple. I like the ice cream I made for the winter ground better, though, and ironically the color options were much more limited there. 😛

Well, that’s it, I’ll continue working on pattern-making and landscaping (using my dead spot testing results to plan trees) and getting my town to look the way I like it, instead of a barren wasteland. I can’t wait until it’s back to normal, and playing in it again day-by-day regularly, and hopefully WiFing again 😀

Edit: I realize I’ve made a lot of references to palettes in this post that would be confusing for someone who didn’t know them, so here’s a list of all the palettes:

18 thoughts on “Plans for Dafdilly”