It rained for the first time in my town yesterday, and strangely, it seemed to rain in many others’ towns as well! Maybe the rainy season in Animal Crossing is upon us. Also, my tree has grown a bit since I’ve last shown a picture of it. 🙂 It actually grew the day I got access to the island (not sure if that’s what influenced the tree’s growth, or if it’s just a coincidence). 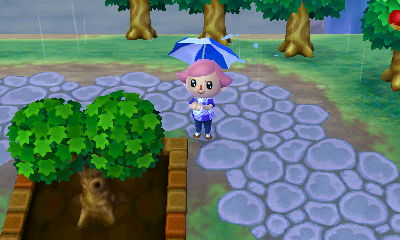 My growing, but still bitty, tree soaking up the rain. 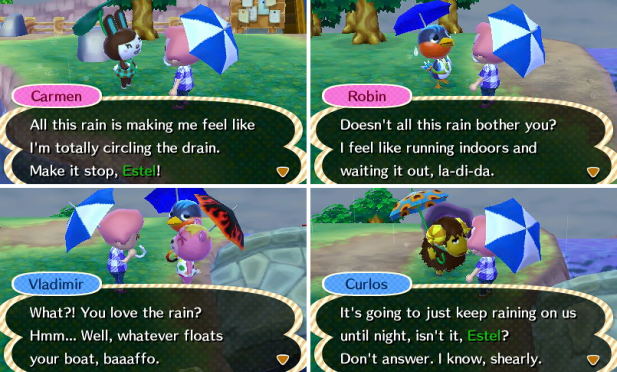 Oh, and Curlos is a new neighbor I’ve forgotten to introduce on here, whoops. >_> 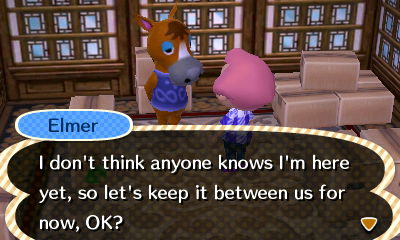 My new (but familiar) neighbor, Elmer. 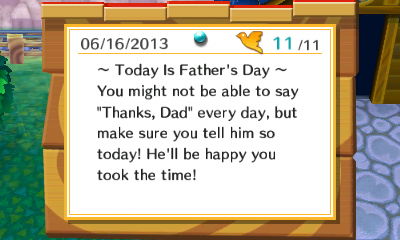 Yesterday was also Fathers’ Day! I went to my dad’s town to mail a “card” and dropped some wrapped presents in front of his house. 😛

For the occasion I received red carnations from each of my characters’ AC dads. 😀 I thought they’d look nice by Fern’s house with the contrast of green and red:

Later on that day, I experienced my first WiFi troubles with New Leaf (other than the standard crash in the middle of a session). WiFi kept crashing when I was trying to board the train to one friend’s town, and when I tried to visit Liam’s town, I got an error code, which I googled and discovered that many other AC:NL players were having problems with as well. I wanted to check to see if my WiFi was working at all, so I opened my gates to see if anyone could come over to my town. 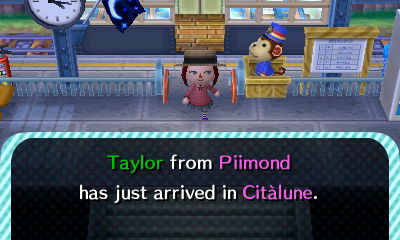 Taylor, the new character of Lenora (who I’ve mentioned before in this blog as Monkeydoodle), came over! It’s wonderful to be re-united with old AC:WW buddies in New Leaf! 😀

After looking around and meeting some of my neighbors (sorry, not much to see or do in Citàlune yet! hope it’s more interesting one day), we went off to the island together. She was even kind enough to pay for the trip!

We didn’t do any tours, but we hung out on the main island for a while and caught some good stuff. I even caught something new for my encyclopedia and museum, a blue marlin! 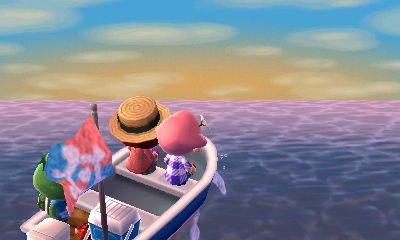 Pretty sunset on the way back! 🙂

But the view got gloomier as we approached my town.

Woah, she gave me an axe! Thanks so much, I’ve been wanting one! 😀 And I hope you’re able to get a replacement for it soon! 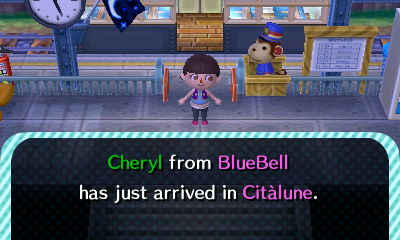 Cheryl from Bluebell came to join us! 😀

I thought Cheryl must have visited someone with Shampoodle, but it turns out her hairstyle is a wig, which she kindly let me try on and add to my catalog, thanks! I think it looks better on Cheryl than me. 😛 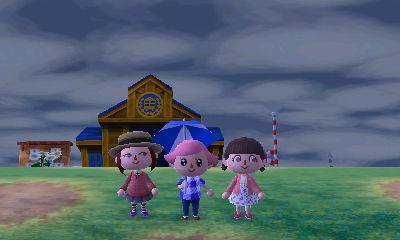 A group picture in a not-so-scenic location xP

Then Liam came over! Wow, I could’ve never done this in AC:WW, open my gates randomly without announcement or appointment and have a full town. 😮 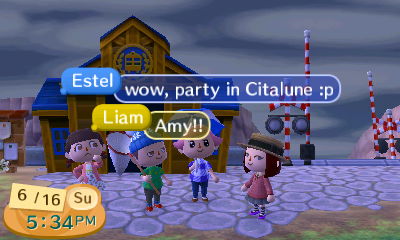 I forgot to take pictures after this! When there are three guests in town, there’s a lot of chatting to keep up with (and the chat bubbles go away very quickly in this game).

There was talk of browsing my shops, but I had already bought everything earlier. >_< So I took out a bunch of items from my storage that I'd been hoarding and let everyone pick them up and drop them to catalog them, and maybe keep one or two things. I'm not sure when we'll be getting the catalog function, though! 😕

We were heading to the town tree when WiFi crashed all of a sudden, but fortunately I saved after the catalog trading, phew. 🙂 I decided not to open again because I felt like we were going to be wrapping up the session soon anyway, and I’d been playing for a good few hours. Hope that didn’t cause any confusion! 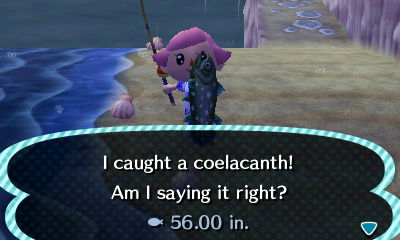 I started playing again later and it was still raining, so I went fishing and managed to catch this! I had a feeling it was going to be a coelacanth before I caught it, maybe something different about the shadow? I love the little saying to go with it, I think most of us have wondered at some point if we were pronouncing “coelacanth” properly. 😛

I’m going to start trying to collect the mermaid series. It’s pretty, and it’d be nice to have any sort of matching furniture at this stage.

I also built my first community project last night!
What is it…? 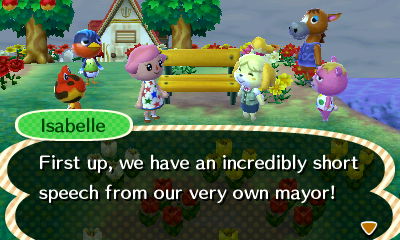 All this hoopla over a yellow bench 😆

I’ve built another on the other side. I put these benches here hoping that they might prevent villagers from moving too close to my house. I don’t know if it’ll work, but it’s worth a try! These will eventually be demolished; I’ve seen other benches (that I haven’t unlocked yet) that will match the feel I want for my town better.

All of a sudden I got my first hybrids today!

A pink cosmo and orange lily near my house, and a blue violet by Violet’s house:

And as you can see, I’ve made a lot of changes to Violet’s house. I think this floral/garden wall is perfect for her, but the door, mailbox, etc. will probably change. Also, some of the decorations on this wall aren’t visible right now because of how small the house is.

So I think it’s time to expand Violet’s house 😀

And why not expand Estel’s too while we’re at it?

Ooh, construction work on Main Street! I think I know what this is from reading other AC blogs 😛 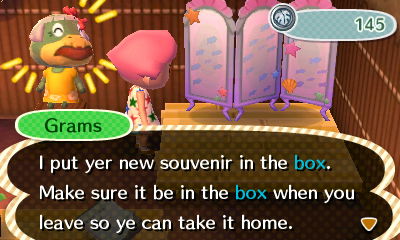 Got this pretty mermaid screen today 🙂

First new project unlocked! Though I don’t really want a police station in my town, and I’ve heard that any buildings like this are permanent. I hope I can unlock some things soon that I actually want to build…

I enjoyed having rain for the first time in New Leaf, but I think two days of it in a row is enough, hope it’s nice and sunny tomorrow! ^_^ I think I’d like to start trying to make a gridded map of my town soon. I like to have one when planning landscaping, and it’d be especially useful in this game with all the bridges and projects to build. It’s a daunting task, though! I might not go out of my way to open my gates or look for gates while I’m working on this, but feel free to let me know if you want to have a quick WiFi. 🙂