First, I’m just going to say that I’m abandoning all pretense that my goal is to catch up to the present in New Leaf as soon as possible. I don’t want to feel stressed and rushed when I play AC; I want to go at a pace I find enjoyable. 🙂 If that means my town’s still in winter when everyone else is in spring, so be it. I’ve come to terms with the fact that this is just how I end up playing AC often these days, and to be honest, I don’t really mind my town not being on the correct date! And with that little announcement, I’m going to just jump in to the beginning of December in Citàlune: of new WiFis, new neighbors, and new sights of stunning auroras.

I opened my gates for a trade a while back, but the trader never came. Instead, CK stopped by! 🙂

After hanging out in my town a bit, we went to her town Bluebell. 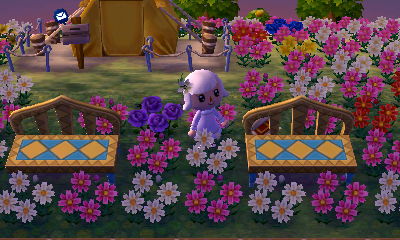 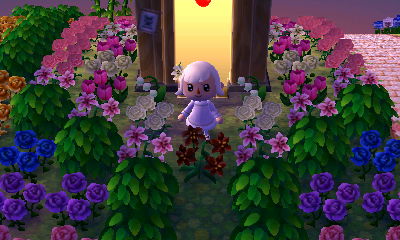 Her town is really beautiful with tons of hybrids, it’s always such a pleasure to visit! While I was there CK even let me catalog a bunch of rare items and DLC — some unorderable (but still cool to have in your catalog) and some were orderable, like the capricorn ornament DLC! Thank you so much for everything, CK! 😀

I decided to use the capricorn statues in the newly re-made main room in Estel’s castle! I liked the rainbow screen/sky room that was here before, but felt like it had run its course, and I was ready for something new. And I think this new room better matches the feel/theme Estel’s castle is supposed to represent—the castle of the moon and all that. 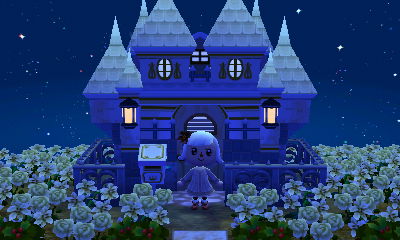 Because I now have several lamps in the main room that give off blue light, the windows viewed from the outside have changed color as well! Before they were yellow, but now they’re an icy blue.

I also made a winter backyard/garden sort of room in Violet’s house — nothing too special, but I think it’s kind of cute!

As I mentioned at the end of my last post, it was time for Biskit to move away from Citàlune. I’m glad he’s gone to a great new home, Megan’s town Blossom! 🙂

Later on I got to see him again when I visited Blossom for the first time: 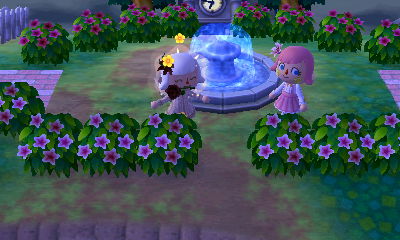 Megan’s town is coming along great so far! The azalea bushes look so lovely in bloom around this fountain! ^_^ Thanks for adopting Biskit and having me over, Megan!

After WiFing with Megan I found a new neighbor, Mitzi, in town! Well, I reset for her house plot to go in a half-decent spot for like 2 hours, so it wasn’t much of a surprise by the time I actually got to meet her. xP It’s a good thing I loaded with a new character that day; otherwise her house would’ve landed right in front of Lyra’s castle!

Mitzi’s definitely a cutie and I love hearing the town tune sung in meows! I’ll enjoy having her in town! ^_^

My first home-grown purple tulip! Grown when I was trying to get more orange tulips 😛 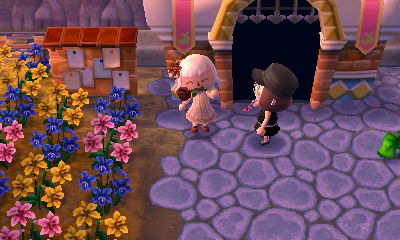 Another WiFi I had recently was with Jessica from Sandy! 🙂 We did a trade: her tweeter, various hybrids, and perfect cherries in return for my ice vanity, blue roses, and perfect apples.

After looking around some, we went to her town! 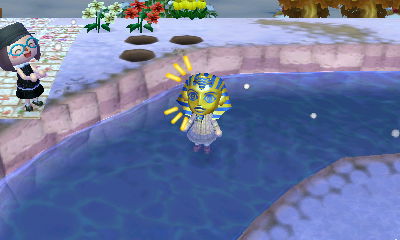 She taught me how to do the swimming glitch, which was pretty fun! Thanks for the WiFi and trade, Jessica! 😀

My neighbors have started thinking about what they want for Toy Day! Here’s what I know so far:

The color-specific requests seem a little vague, like I’m not sure if they’d want clothes, furniture, wallpaper, or what. But yeah, hopefully I can figure out what they all want by Toy Day! 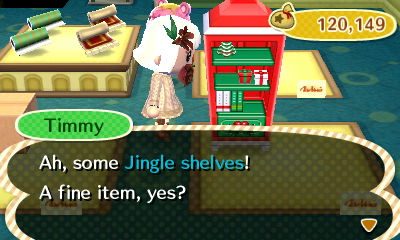 And the gorgeous series as well, at GracieGrace! 😀 I haven’t bought the whole series (and I wonder if I should or not, since it’s so expensive), but I bought some pieces I thought would be fitting for Lyra’s library. 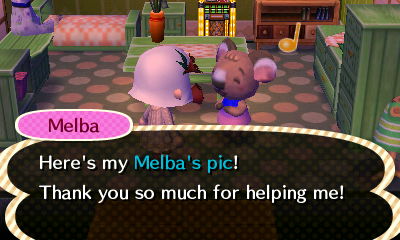 Melba gave me another copy of her picture! 🙂

Hehe, it’s about time! Julian’s been hanging out in my other town for a while now, and he finally packed up to get out of there! So it’s time to move him over to Citàlune.

I reset for this house location for a long time, but after a while, started to wonder if it was too close to the cliff to be possible. 😦 I think it’s impossible, and I’ll explain why using grids, since all stuff like this (house locations, PWPs, flowers, etc.) is placed on a sort of invisible in-game grid. Feel free to skip over this if you’re not interested, lol. But maybe it could be useful to someone else out there who plans house locations. 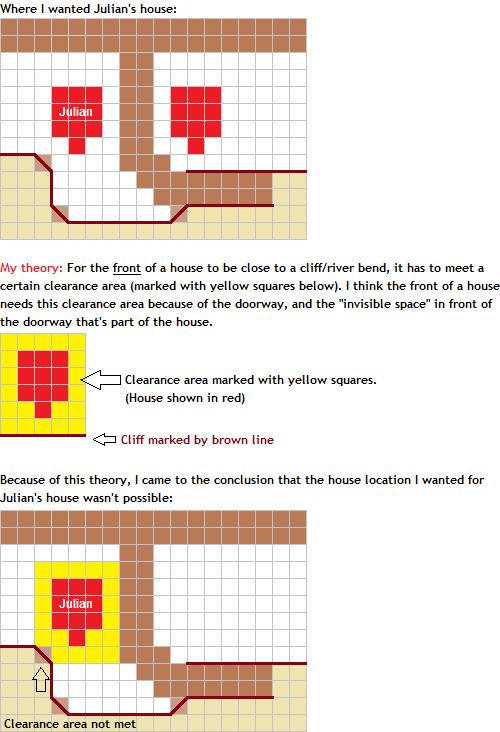 I visited a fair amount of dream towns after this to see if I could find a house close to a cliff/river bend that didn’t meet this clearance area, but all of them did. So I think my theory is correct, but I’ll keep an eye out for new info!

In the end I accepted a house location for Julian to the right of Henry’s house. It wasn’t my first choice but it should be fine.

Welcome to Citàlune at last, Julian! 🙂 He’s one of my dream neighbors I’m most excited about, since his appearance, house interior, and house exterior all seem so fitting for my town! 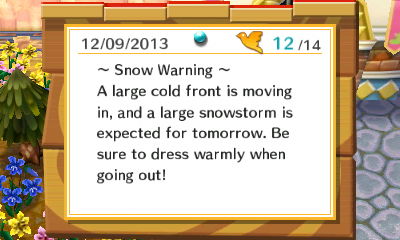 Ooh, a notice on the bulletin board for a large snowstorm! 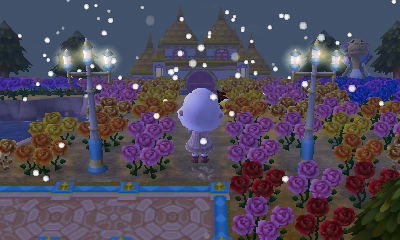 I built two new streetlights by the path to Lyra’s castle, and I envisioned taking a commemorative photo of them at 6 PM with the lovely sunset colors, but because of the snowstorm it’s already quite dark! 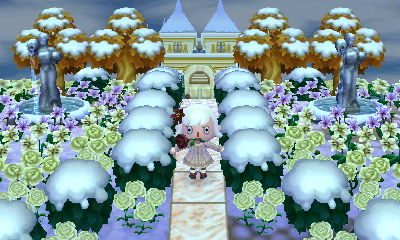 And of course, the next day my town was covered in a blanket of snow!

That night I had a feeling there might be an aurora since the sky was clear, and I was right! Ahhh I love auroras, I was really looking forward to this! ❤ You can expect lots of gratuitous aurora pictures (and a dream update during an aurora) to come! 😛 (Gotta do a lot of re-landscaping, and maybe re-pathing, first though!) 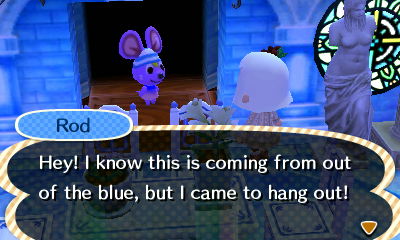 Looks like Rod and I are becoming pretty good friends! ^_^

Henry moved out recently and I put him on one of the adoption sites as usual. The girl who adopted him was really nice and said he was one of her top dreamies, so I’m glad he went to a good home! 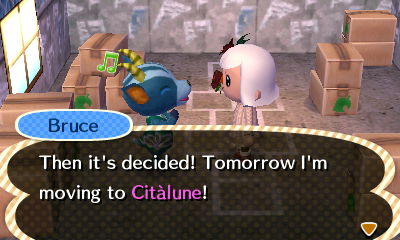 To replace him, I asked for a dream neighbor of mine, Bruce, to move in! 😀 (Like Julian, he’s from my other town.)

His house ended up exactly where Henry’s house used to be, and right next door to Julian. 🙂 Despite the house location drama I went into earlier, I think it’s turned out okay, since both their houses are bluish. I’ll try to make a nice garden of blue and white flowers around their houses over time.

70 thoughts on “Beginning of December”