) elsewhere. Crazy Redd came as usual on Monday, finally stocking a cabin chair after Kammile already ordered one for me. And on Tuesday I heard the wonderful noise of Gulliver’s UFO!

Aaah, the scenery of a crashed UFO and collapsed pelican in a field of red roses xP
I didn’t have time to help find his lost UFO parts until later that evening, though.

He sure sounds like he knows what he’s doing. >_>

I always love receiving statues from Gulliver! ^^ Our anatomies are so different 😆 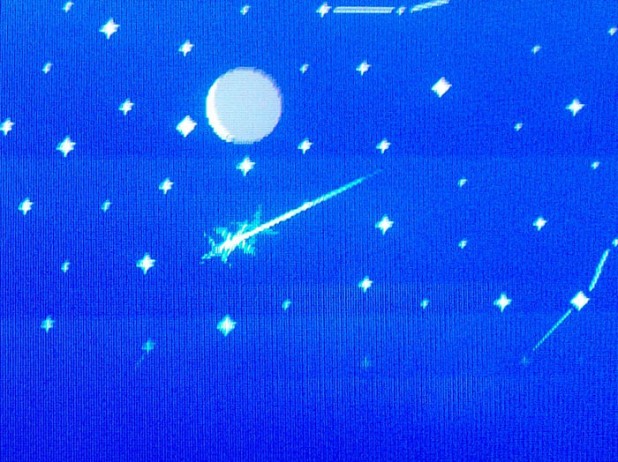 After seeing two shooting stars in a very short timespan, I figured something was up, and put away my tools. And wow, I’ve never seen so many in one night before! 😯 Sometimes there were two or three practically in a row, and even during less busy periods, I didn’t have to wait too long to see another one. 🌠

After bringing out each of my characters to make a wish, I went to two places in town I like, the waterfall and island, to take pictures of the bow:

After a while, though, I knew I would have to start ignoring the shooting stars so that I could finish watering my flowers (what I turned on my game to do in the first place) and go to bed. It was painful to do because there was a string of them as soon as I equipped my watering can. >_<

When I was watering my blue pansy breeding area, I found a new house there, belonging to my new neighbor to replace Maple: Nan! 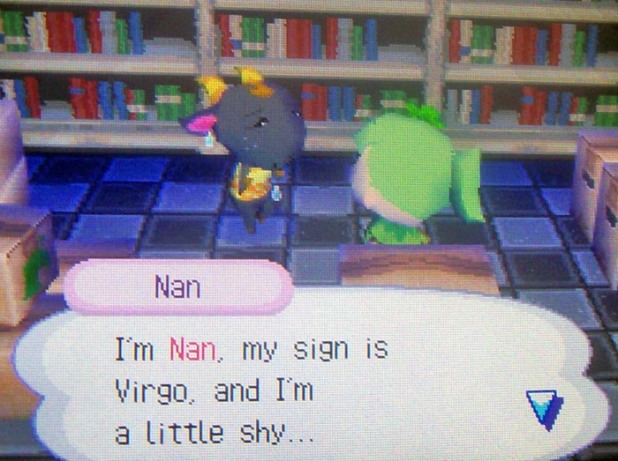 I can understand Nan’s nervousness, it was late. xP I really like her library-style home, she seems studious.

Here’s a full picture of her house once I set up a path to it:

This is my favorite house location in Dafdilly, so glad someone lives here again!

Because of the meteor shower, the next day I got some goodies from Wishy in the mail for all my characters! I got an unknown machine, black king, blue dresser, and this mummy’s casket:

It doesn’t fit my fruit kitchen at all of course, but maybe you could make an Egyptian tomb with it, along with the ancient tile/wall and some treasure chests, or something. 😛

On Thursday, all the trees I planted for Autumn became full-grown! 😀 And as you can see, one of the 1,000 Bell-bags I planted grew into a money tree! 😮 I think it would look better in a money tree ‘orchard’ or in a special location, not this random place, but I guess I’m leaving it for now. 😛

Something I haven’t heard from Blathers in a while…

As if I’m not already involved in the other exhibits? -_- 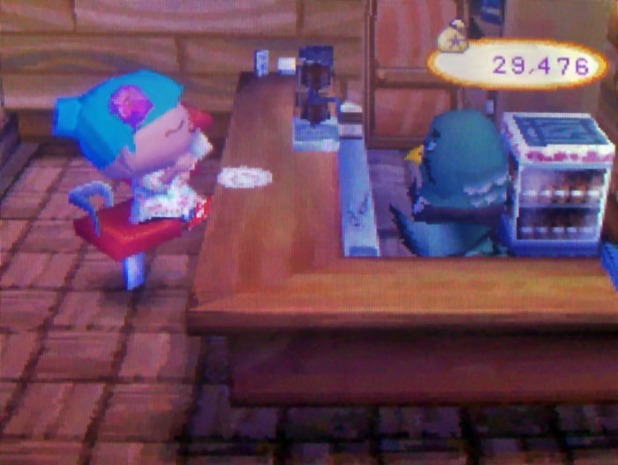 Having a celebratory cup of coffee with Brewster 🙂

And of course, checking out the first completed exhibit in my museum, and the final fossil! 😀

I found Peewee packed up yesterday, so he should be leaving tonight and gone by the next time I play. I won’t say “finally” since he grew on me, always complimenting my patterns and walking around my gardens with his watering can. ^^ But it’ll be nice to have another new neighbor. 🙂 He’s giving me quite the side-eye. 😆

Can you see a purple pansy in this picture? 😛 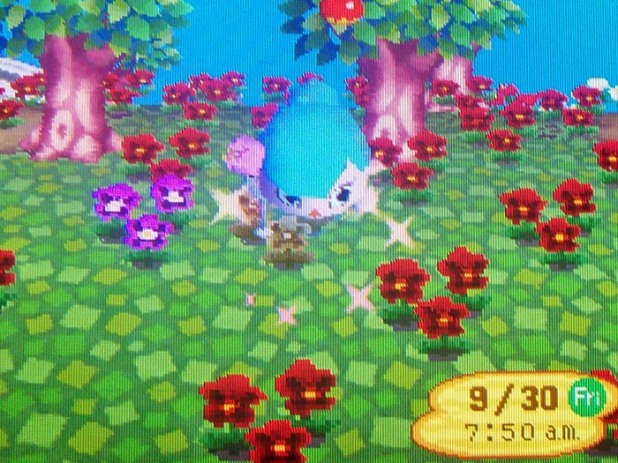 Since zooming in makes trees magically disappear, now you should. It’s my second one!
I put it on this peninsula where I keep the cool-colored pansies I’ve gotten so far:

I figure I don’t have enough hybrids to decorate my town extravagantly — like lining paths or anything — so I just put most of them on my island. 😛

I thought it looked particularly vibrant this morning! 🙂 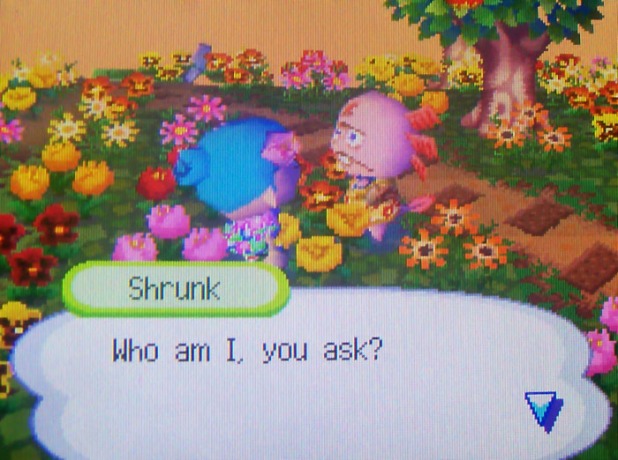 I found Dr. Shrunk frolicking there (and running through flowers 👿 ) later today.

Twisk was offered to learn Sorrow, Approval, Confusion, or Discontent. I passed on all of them, though I was tempted by Approval…I figured that I already have two happy emotions, though.

Bell’s choices were Sorrow, Distress, Thought, and Anger. She learned Sorrow and forgot Disappointment. A good swap, I think!

Laughter, Exasperation, Inspiration, and Rage were Harmony’s options, and I went with Laughter. 😀 (She and Melody didn’t have to forget anything.)

Melody also learned Laughter! 😛 I just really love that emotion — I wish Twisk would learn it! Acceptance, Realization, and Sorrow were the other three choices for Melody.

Trying out my secondary characters’ new emotions, which they’ll probably barely use 😛

I’ve never heard this night walker one before! It’s my neighbors’ impression of Kammile’s character Dawn. 🙂

I’m excited for tomorrow to see what my town looks like, with the coming of October, and its changes into Autumn colors! Hopefully my paths won’t look too bad. 😛