It was nice to have some confirmation from a bulletin board notice that the constant rain and clouds were because it was the rainy season, which is apparently now wrapping up. The occasional rainfall is nice, but after too much of it I was really missing bright blue skies, sunsets, and stars. A rainbow later on helped to symbolically confirm the end of the rainy season, too 🙂

Bring on the clear skies!

I quickly noticed that it was a lot noisier in my town on July 1st! 😛 The cicadas are now making my museum’s bug collection a bit noisier too. And I caught an arapaima for the first time (other than island tours). Look forward to what else might be new this month! 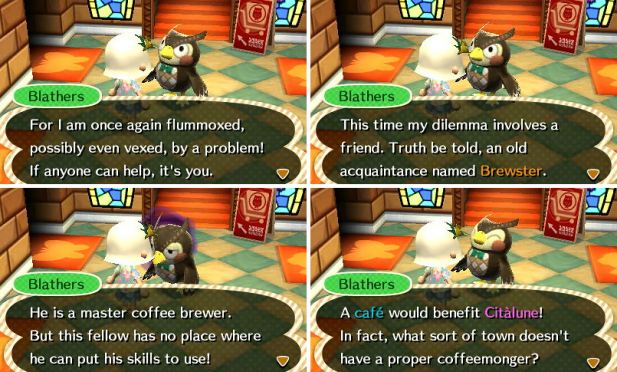 I found Blathers in a thoughtful mood when bringing him the day’s donations, only this time it wasn’t about the museum’s attendance, but on building a café for his old friend Brewster! Wow, already?! I had no idea this would be so quick to unlock! Well, I might not be building it right away because I’m still deciding where I should put it…

I went to Bluebell again and we did a bit of a trade; she gave me yellow rain boots I’d been wanting, and I gave her a gold nugget. 🙂

And after the trade, I got to look around Bluebell a bit. 🙂

Bluebell’s paths have changed again, and they look beautiful! I especially like how they look with the pink and white roses here. 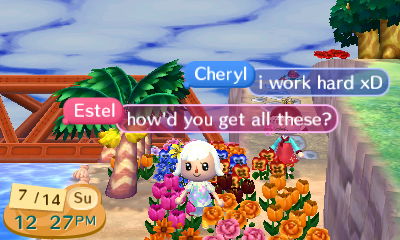 There are lots of hybrids scattered around the main part of town as well; these are just the spares! o_o She offered to let me take a few, thanks so much! 😀

I got to visit Apple again, this time inside her house. I love how she has an apple clock and apple tv! 😛 As for the question, I’m not sure what my favorite spot is — too much to choose from! (The answer choices weren’t very specific, anyway. xP) Thanks again for the gifts and for letting me visit your town, CK! 🙂

It was raining back in my town, so I was able to put my new yellow rain boots to use! ^_^

Also, my town tree has grown a bit. Now it’s around the same size as the other trees around town.

The first time I walked in on one of my neighbors sleeping, cute!

I noticed a new roped-in spot reserved for a neighbor moving in, and it’s not where I plan on putting a path, garden, or community project. Good job, Opal!

Vladimir is thinking about moving, and I didn’t object. Though I’ve read on forums that saying goodbye to a neighbor doesn’t always result in them leaving. I’ll miss the surety and easiness of managing neighbors in AC:WW. 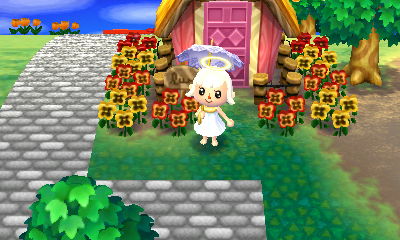 If he moves, I’ll be glad of the opportunity to straighten up this path, which currently has to wrap around his house.

Since the sky cleared up, I decided to go ahead and get my town’s dream address. Not because my town’s anything special, but hey, why not?

Just a little while later, though, a rainbow appeared in my town, and of course I couldn’t update my dream address to include the rainbow since you can only do that once a day. >_< Oh well, it was still nice to see! 🙂 Now for some gratuitous pictures of various locations in my town with a rainbow in the background: 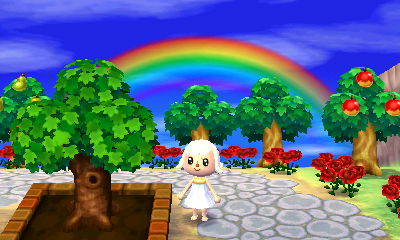 A row of perfect apple trees. The train is a little modern for the aesthetic I want for my town, so I’m trying to hide it a bit. 😛

Come sit with me, Carmen! >_< I've seen pictures of people sitting on benches with their neighbors, but I don't know how. 😦

Katrina was in town again today. She said my lucky item was men’s bottoms (is that pants in general…?), which I passed on for now, but I’ll keep it in mind if I start tripping.

Club lol has multiple functions: the night club, the solo performances by K.K. Slider with his guitar (like in previous games), and also comedy performances by Shrunk in the daytime. If you bring Shrunk some food, he’ll tell a joke, which in turn gives you a new emotion. 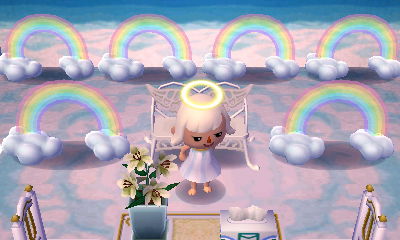 My first two were happiness and shyness ^_^

I tried refurbishing furniture for the first time with a Rococo sofa.

Oh, it’s pink 😛 I was expecting a cream color or something. I still like it, though. 🙂