There have been a few comings and goings since my last AC:WW photo post, like Filbert here, who moved in to replace Aurora from Anicotti.

Then Octavian moved out, and look who moved in…!

One of my dream neighbors! I’ve already locked Puddles and Margie together, and When I get a fourth dream neighbor, I’ll lock him or her with Static. I wonder if it’s possible to lock in all 8 neighbors? Then no one would ever try to move out, which is pretty crazy. 😯 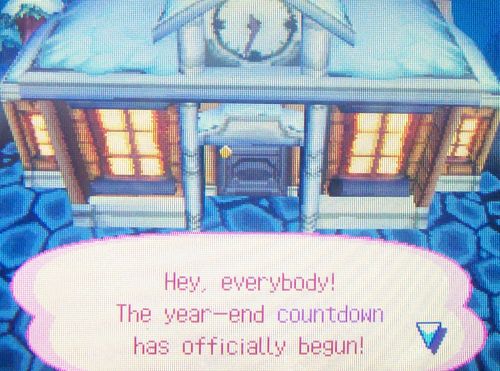 Less than half an hour to go 😀 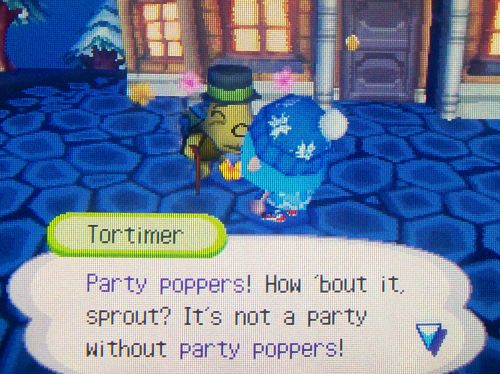 Yay, I love party poppers so much! 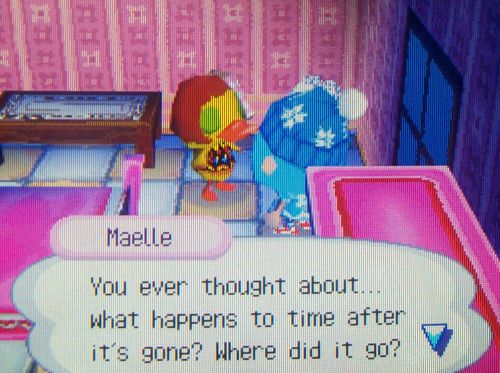 And Tortimer is feeling… excited:

And Static is too busy unpacking to join in the celebrations.

Wishy must have been celebrating the new year, though; there were lots of shooting stars that night! One even appeared just as the countdown hit 4 seconds. 😮 I brought out all of my characters to make a wish. It was almost instantaneous with Harmony, just a few seconds after stepping outside! I’ve gotten a decent picture of a shooting star before, but none this time: 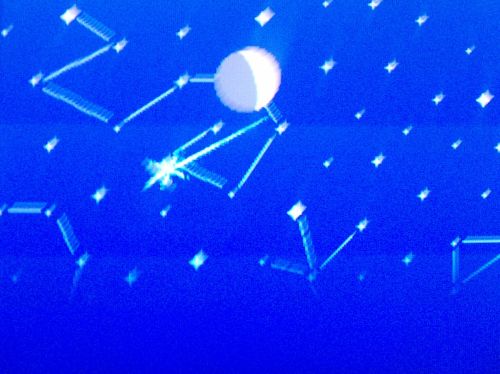 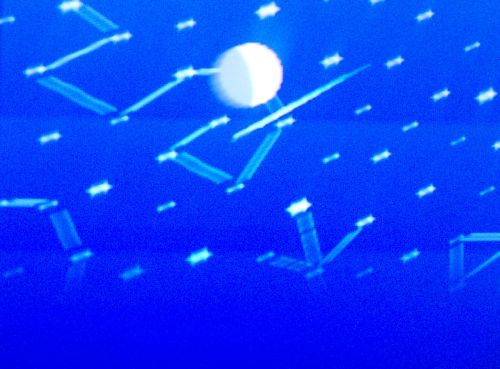 Then the fireworks show began:

I need to get a tripod or something, my hands are too shaky. 😛

The next day the cedar trees were lit with holiday lights. 😀 Brr, my house looks cold with the snowy cliffs and cedars in the background.

The weeks passed by: I had my dead spot testing attempt, which failed (I’ll try again another time), and I also spent a lot of time working on patterns for the WiFi party I’m having on my birthday, but I’d like to keep those a surprise.

Of course I had to make it to Puddles’s birthday yesterday despite being busy, she’s my last remaining original neighbor. 😀 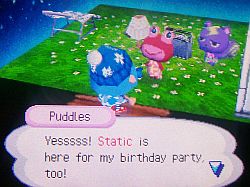 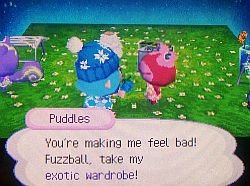 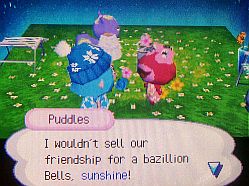 I gave her a night sky tee to match her wallpaper and she seemed pleased, though I don’t think neighbors ever do anything with their birthday presents.

My own birthday is tomorrow, and like I’ve said, I plan to have some of my closest past WiFi friends over for a party. I wish more than three could come. 😦
I’ll go over information and plans for the party to hopefully make it go more smoothly. Writing instructions with AC:WW’s chat system can be a pain. >_<

Time: 6 AM (click for my time). Yes, it’s very early so that those whose time zones are way ahead of mine can hopefully still come. Then I can spend the rest of the day doing more normal birthday activities. xP
Host: Twisk of Dafdilly (2967-0580-6954)
Bring: as little as possible. 😛 This is so that you will have enough room for gifts and items obtained from games. You don’t even need to bring tools because I’ll have three sets in the upper righthand corner of town (see map), but you can if you want. Leave out the axe, watering can, slingshot, and timer, though. You can also use empty letters as storage.

On this map, important locations are bordered with colored lines and labelled with numbers. Below the map, I’ll use these same colors and numbers to address each location and its corresponding activity, if that makes sense. >_> 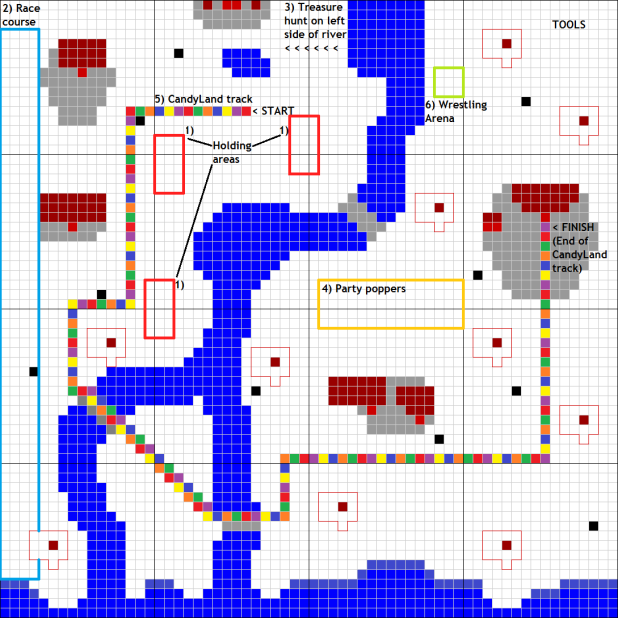 1) Holding areas
These are 6×3 areas on the left side of the river and near the lake (see map). Each guest may choose one and use it to store items throughout the party. If you have too much in your inventory before beginning the treasure hunt, for example, you can temporarily store those items here.

2) Race course
Location: The race course is on the far left side of town, beginning near the north wall and ending at the beach (see map).
Instructions: I will show where the beginning of the track is and then walk to the beach. Starting a timer will be the signal for beginning the race. To make things interesting, each player will wear a King Tut mask and there will be pitfalls.
Prizes: First place: 30,000 bells; second place: 20,000 bells, third place: 10,000 bells

3) Treasure hunt
Location: On the left side of the river, not on the island or on the right side of the river (see map).
Instructions: I think this is simple enough. 😛 Just search for buried items and dig them up! You’ll need a shovel, so let me know if you don’t have one and I can provide one for you.
Prizes: You can keep what you dig up, of course! All of the items have value of some sort, whether they’re Gulliver items or cool spotlight items or un-orderable items. But if you already have a few of them and/or don’t want them, feel free to trade when it’s over.

4) Party poppers
Location: To the left of the town hall (see map).
Instructions: This isn’t a game, but we can set off some party poppers at some point. It would be awesome if one of us got a great picture of setting off the party poppers in unison. Since timing party poppers by saying saying “Now!” or counting using AC:WW’s chat system rarely works, I thought setting a timer could be helpful. I could say a time, and as soon as the timer shows that time we can all set off the party poppers together. 🙂

5) CandyLand
This is what I’ve done the most preparation for, so I really hope we can complete the game. But there are the other games, too… should the treasure hunt, race, and party poppers be done first to get them out of the way, or should we do CandyLand first to make sure we have time to play it before anyone has to leave? Feedback is appreciated!
Location: The first candy square is red and is located below the gate pond. The path goes downward, crosses the island, and ends at the door of the town hall with a purple square (see map).
Instructions: You guys have played CandyLand before, right? >_> If not, you may want to read about it a bit on Wikipedia. But it’s a very simple game, so I’ll try to explain it too. 🙂 I probably won’t play, I will be “drawing cards” and keeping track of where everyone is in case WiFi crashes (hopefully it doesn’t). There are red squares, purple squares, yellow squares, blue squares, orange squares, and green squares — in that order — forming a path. For each player’s turn, I will draw a card that is one of those colors, and you will go to the next (closest) square of that color. There are also double color cards, i.e. double red, in which case you go to the second red square you come across. The first player to make it to the end wins. Even though the track ends on a purple square, you don’t need to draw a purple card to win — just a card that will take you beyond the purple square.
Prizes: The prizes are either a royal crown, crown, or throne. Each player will pick a prize when finished. There will also be the option of 495,000 bells if you don’t want any of those items; it’s more than you will get for selling any one of them.

6) Wrestling
I doubt we’ll get to this activity, to be honest, but just in case I greatly overestimate how long everything else takes…
Location: On the right side of the river, near the waterfall (see map).
Instructions: Surrounded on all sides by pitfalls, there will be a 3×3 square to “wrestle”: trying to push your opponent out of the square. This game is for two people. How it would work would be first a face-off between two guests, then the third guest would take on the winner of that match to determine the overall winner.
Prizes: First place: 30,000 bells; second place: 20,000 bells; third place: 10,000 bells

I hope everything’s pretty clear and that this will help to avoid confusion and make the party as fun as possible (with less reliance on using AC:WW’s keyboard to give instructions). Let me know if you have any questions! 😀