I know that this isn’t technically the first time I’ve seen green grass in Suncombe, but it was especially exciting to see again because I only really started playing in this town last Autumn! This early-Spring grass is especially warm and vibrant, too, I love it! 💚 In April it will turn a deeper and more turquoise shade of green, so I’ll enjoy this current grass while I can! 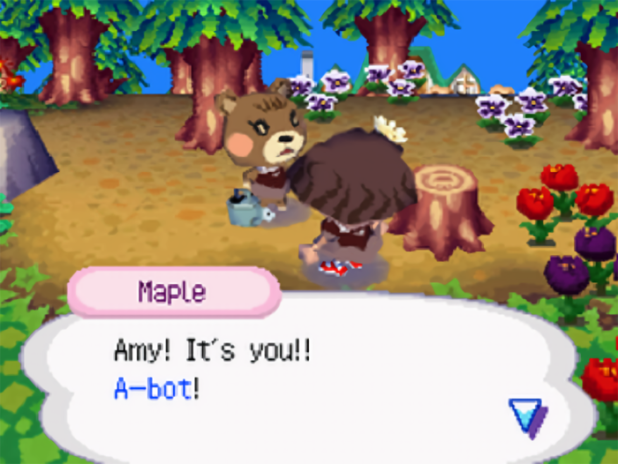 Maple was the first neighbor I greeted on February 25th, this blessed green day in Animal Crossing.

She was hanging around the wooded entrance to my house. I do see your outfit — we match! xD She’s wearing the dress I made based off Princess Aurora’s peasant outfit from Sleeping Beauty. I’ve always really liked that outfit and daydreamed cosplaying it, and I think it fits the vibe of this town. 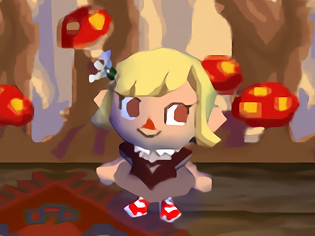 Not bad for a Wild World dress, I think! Briefly changed my hair to complete the effect, so if you see me blonde in later photos, that’s why 😛

I was so happy to see the green grass on February 25th, and perhaps that’s why everything felt so happy & cozy this day: Neighbors chatting with each other on the path, then walking away singing, and delivering letters to each other… ❤ 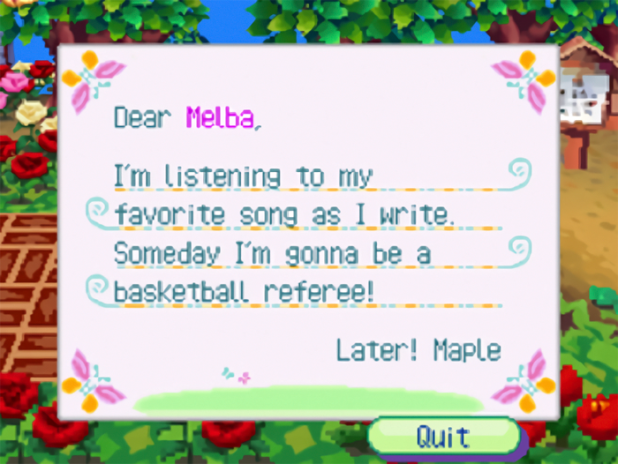 To celebrate the springlike scenery, I felt like making a gif of fishing for nothing near Melba’s house:

And speaking of fishing…

I found out someone else won the latest Fishing Tourney this time!

I actually caught two stringfish and was going to show off by giving one for the Fishing Tourney, but that same day I was kind of distracted working on new patterns, so I forget to give the fish in time. These are the new patterns I was working on! I’ve never been super happy with the museum’s landscaping in Dafdilly, because I feel like the colorful flowery paths don’t match the atmosphere of the building well. So I felt inspired to do something special for the museum in this town at least once, with landscaping that fits the symmetrical and Grecian-looking architecture. I love white and green together, so I brought a few jacob’s ladders from Dafdilly, but I’ll probably put them away when I start working towards perfect town status because I want to feel that surprise when a jacob’s ladder pops up! 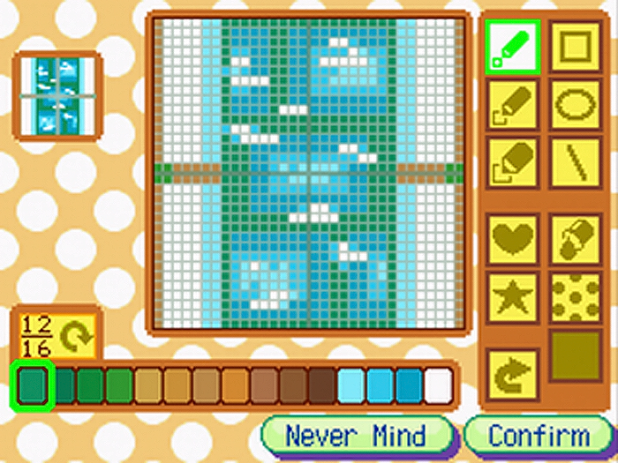 A look at the pixels of the reflecting pools! I daydreamed about being able to pixel in watery reflections of white columns in the water, but rightly decided that it would be too complicated, and maybe close to impossible to achieve in this game’s limited palette-system.

That’s something kind of refreshing about Wild World, though! Because the palettes are pre-set, there’s only so much tinkering you can do, you know? Like there are only 3 blues and 1 white on this palette. 😛 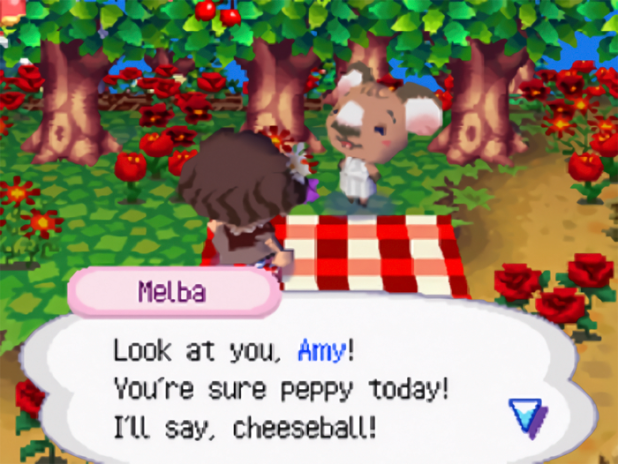 Melba’s had a fashion hobby lately, and I thought she looked cute in this cake shirt I gave her! She’s also asked for a citrus gingham, spring shirt, and explorer shirt. ^^ But… an explorer shirt is what I just gave you to wear, after you said you looked everywhere for it…

Since some dialog inserts and gifts/rewards are randomly generated, I guess it can lead to cute mishaps like this! ❤

Lucky for Goldie, I managed to find two ankylosaurus fossils! She put them behind that skull back there, which is…not an anklyo fossil. 😛 Still looked cool, though!

Katrina’s tent looked so welcoming in the rain! 🙂

The cards have spoken. It is the THUNDER symbol, in its natural state.
An otter holds a strange shell in his paw…
He swims upstream in the river with amazing speed.
None know how he is able to propel himself with such incredible velocity…
He is not unlike a cheetah running at top speed!
Yessss… Very well, we have “Forward Movement,” “Attack,” and “Velocity”…
So what does this portend?
Perhaps it means nothing. But it may mean everything.”

I think Katrina’s trying to remind me to give Pascal the scallop I have next time I see him! I’ll try to remember this time >_<

Bree’s house looked cozy and inviting in the rain, too ^^ I guess a light on inside just tends to do that~ Alfonso is my boyfriend’s favorite in town; I think he enjoys the Mario references like the “it’s a me” catchphrase and the shirt he starts with.

I have a lot going on right now, but my current goal for Suncombe is to try my best to focus on making new paths whenever I can! I think the simple single-tile brick pattern looks fine enough, but I’d rather have bordered ones, along with little side roads. I’m thinking I could try cobblestone? But we’ll see! 🙂

17 thoughts on “First glimpse of Spring in Suncombe”