I worked hard catching bugs and fish with Bell to pay off my fifth home loan! 😀 It was really nice enjoying the scenery of the changing sky as evening deepened, and as I raced against time to gather the bells I needed before Nookington’s closed. 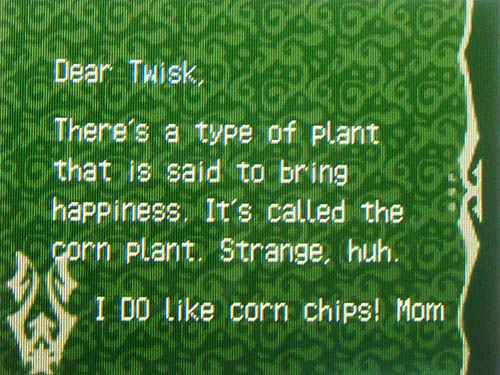 I was surprised to receive this letter from Mom today with a dracaena attached. I mean, it’s both a spotlight item and lucky item! Receiving this makes me wonder what all she can send to you. I’ve only gotten fruit, clothes, and money bags from her in the past, usually with some reference in the letter. (With fruit, she said that the backyard tree fell down; with clothes she said something about finding them in the wash; and with the bell bags she said that money could be found where you least expect it.) 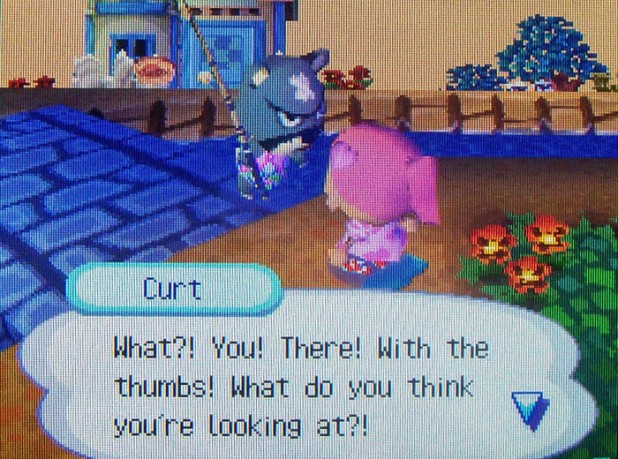 Curt wearing Twisk’s petal dress. 😆 Seeing Peewee and Curt wearing my dress design reminds me of Roscoe in my original AC:WW town. I displayed this frilly blue dress at the Able Sisters and he started wearing it all the time. His hobby was gardening, so he was always walking around in my blue v-neck dress and carrying a watering can. 😛 One of his other hobbies was clothes collecting, which I remember well because he always wanted an amethyst shirt, and I didn’t have one. 👿 He wore pretty much all of my designs, not just the frilly blue dress, though he seemed to like the feminine ones best. 😛

I was determined to pay off my 728,000-bell mortgage today even though I only had one bag of 99K bells left over from yesterday. Since I think Twisk has already caught most of the fish and bugs you can catch right now, I let Bell do the fishing and bug catching — my primary way of making money lately. I don’t like buying white turnips because they end up cluttering my house, and I’ve been too lazy to harvest fruit. I just let fruit trees add color to my town. ^^ 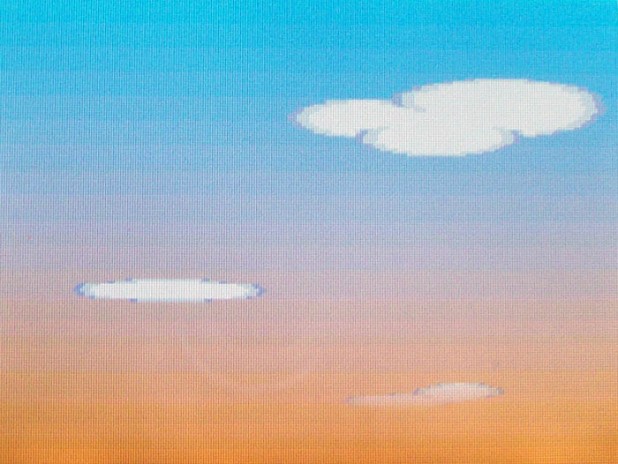 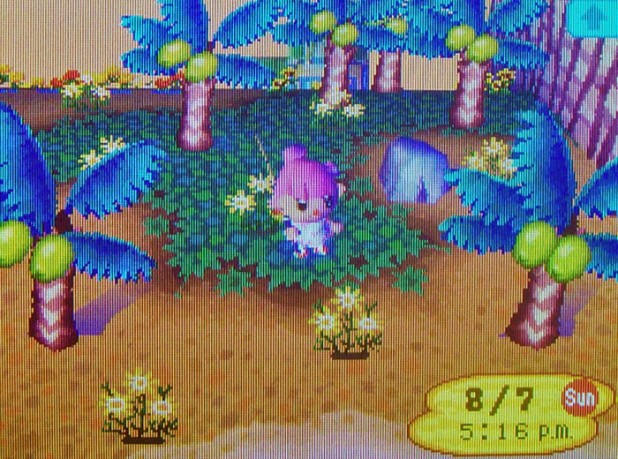 She started fishing at one of my favorite times of day in AC:WW, just as the sun is beginning to set. The shadows lengthen and everything is bathed in a soft golden light. 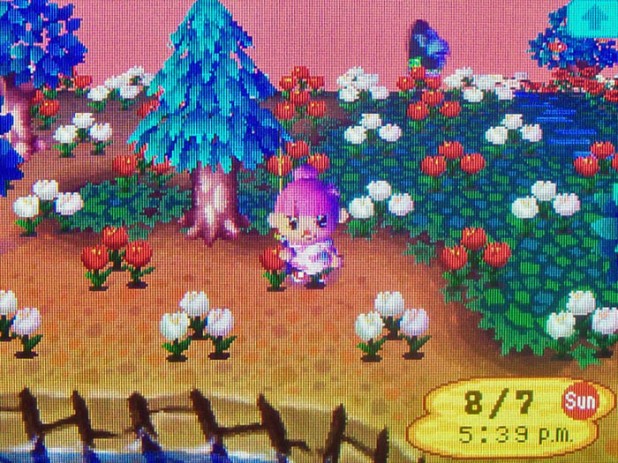 Later on, the gold is replaced with a warm rosy tinge, and the shadows deepen even more. 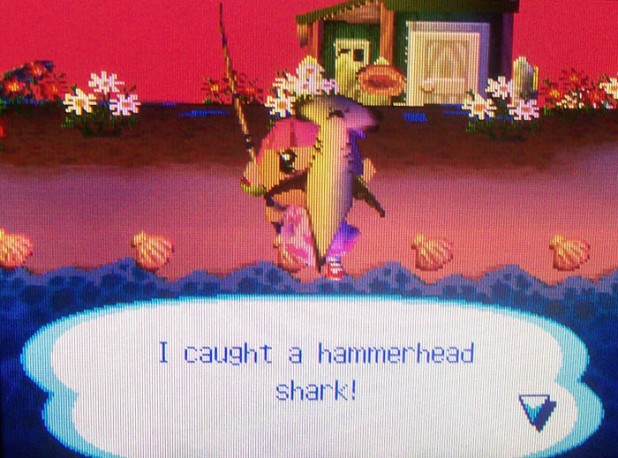 I think the beach looks nice in this pinkish hue. 🙂 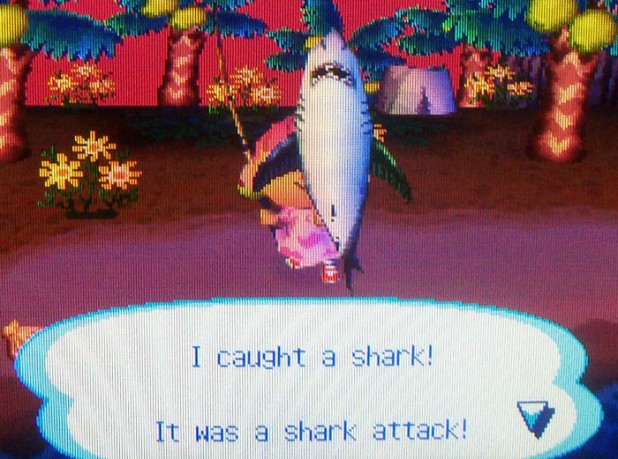 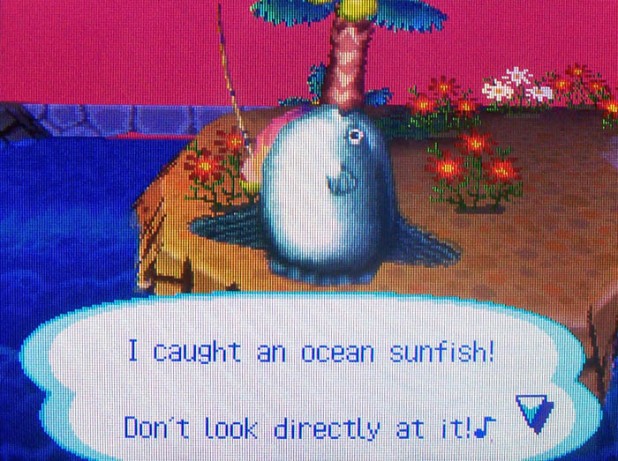 The fuschia darkens to purple, then stays like that for a while. 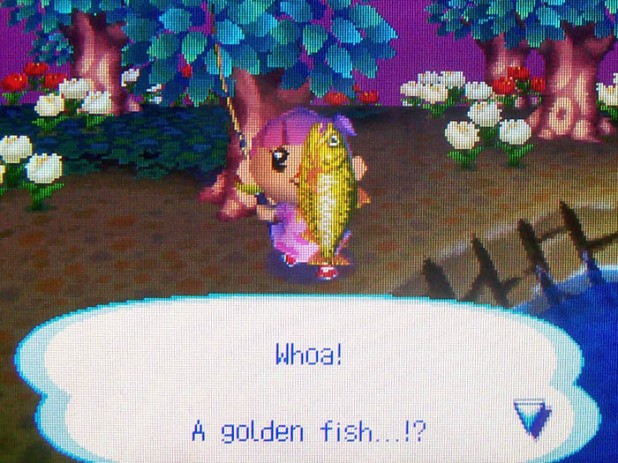 The only dorado of the evening. 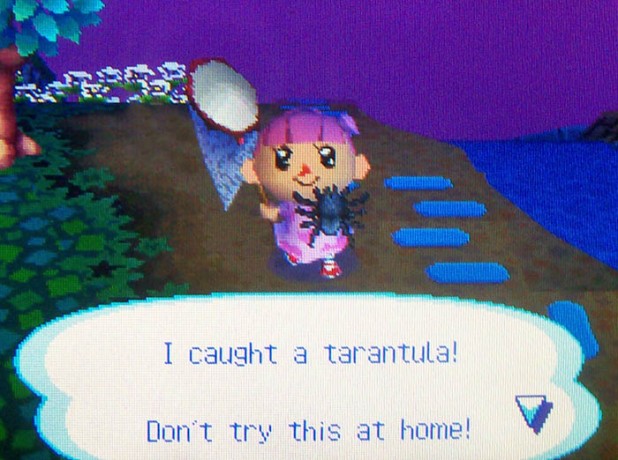 Ah yes, I was excited for 7 PM to come so that I wouldn’t have to rely solely on fish. In fact, I pretty much stopped fishing unless I saw a big shadow, and just walked around catching all the valuable bugs that appear on trees (especially coconut palms) at night, while also listening for the scuttling of tarantulas and scorpions. 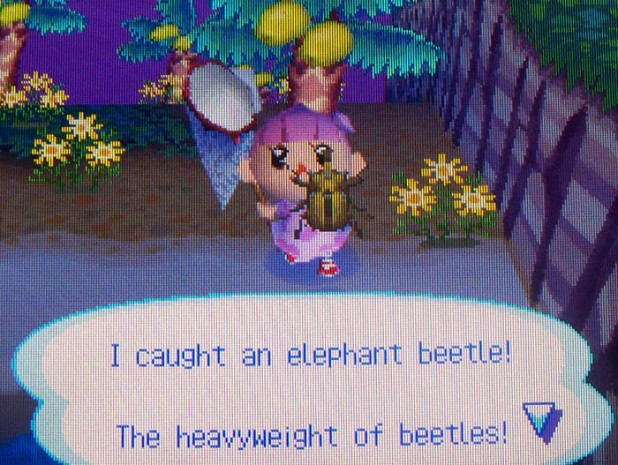 I caught so many of these, they were a big help!

I don’t have any pictures from when the sky turned inky blue because the bug catching became pretty intense. 😆 I was racing against time so that I could make my payment before Nookington’s closed. At 10 PM I still had over 100,000 bells to go, but with the help of one of my red turnips, I managed to gather enough bells 10 minutes before closing time! Since Bell did all the work, I let her do the honors. 😛 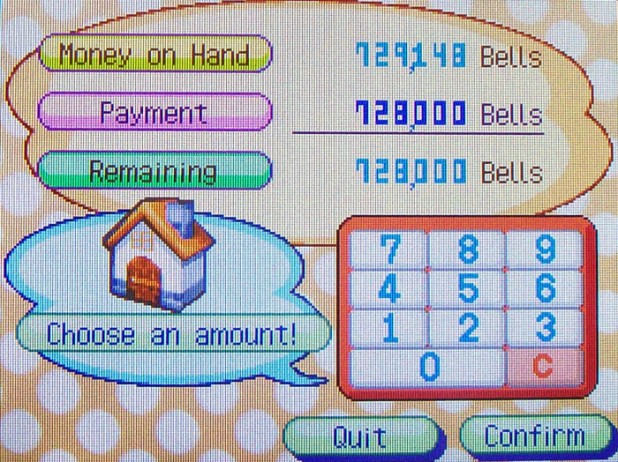 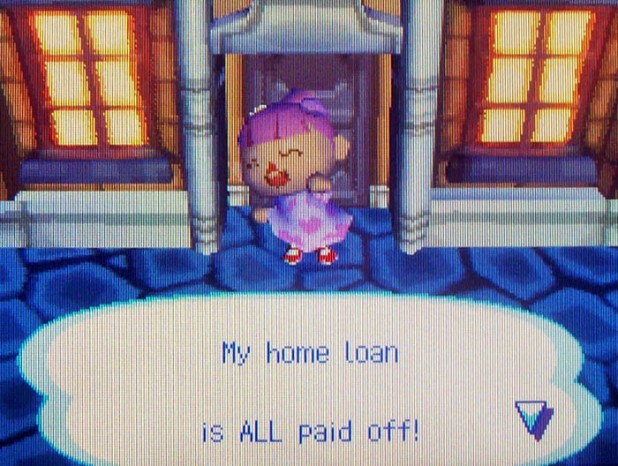 Yay, only one more payment (but it’s an even bigger one) until I get my mansion ^_^

6 thoughts on “Fifth debt paid off”