Yes, another WiFi post! 😛 I can assure you that my next post will finally be on regular town happenings again, in case you’ve missed that. ^^ In this post we’re diving into travels to Lenore’s and Megan’s towns, as well as a reunion with old friends. ❤

Hehe, some of these WiFis are with the same people as the last post! A little over a month ago, Lenore and I met up to help with each other’s wish-lists again.

Lenore gave me some veryyy cool items: a throne, a birthday table, and a sloppy carpet! Well actually, she lent them to me to dupe them and then I gave them back…but still, it was extremely nice of her to go out of her way to let me get these items, and to trust me with the duping. 🙂

Things were just the same ol’, same ol’ in Citàlune, so we quickly went to her town:

Lenore’s town Citàluna has undergone some construction and updates! Like these metal benches, which are a gorgeous addition to Lenore’s castle garden.

Testing out the benches ^^

Another new addition: a bell in the Autumn section of town, surrounded by warm flowers.

After showing me around town, seeing its new updates, and talking about future plans for her town, it was time to head back to mine. Thanks sooo much for letting me have access to those wonderful and valuable items, and for having me over! 😀 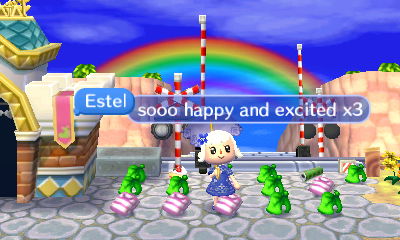 Another who helped me with my wish-list in a big way was Megan, who actually gave me all of the rest of my wish-list items! 😯 I was so shocked and overjoyed at her generosity, and at the sudden access to the rest of the items I’d been wanting for my various rooms and characters in Citàlune. I can’t wait to make use of them!

I gave her a few trinkets “in return” but it was very hard for me to match her generosity in full…I’ll have to think of something else in the future 🙂 But for now, thank you so so very much, Megan!

Last time Megan visited there was a special fiery sunset, and this time there was a rainbow…maybe she’s good luck for cool weather? xP 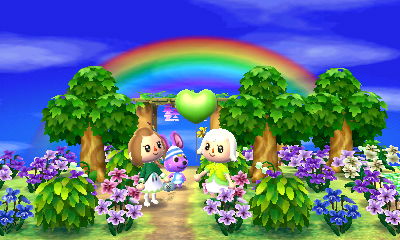 It’s always kinda funny to me during WiFi when a villager walks right up to where the people are, like he or she wants to join in the fun too 😛

Just some more around-town pictures of the two of us with the rainbow 🙂 She gave me the green heart balloon I’m wearing in these pictures, along with a yellow pinwheel, both of which match my new dress (one of my wish-list items) very well! 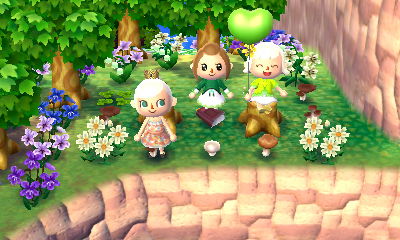 A new friend, Ann from Splash, also came over, and we looked around town and stopped by this quiet spot overlooking the sea. Thank you both for coming over, and again, thank you to Megan for helping me so much with my wish-list! 😀 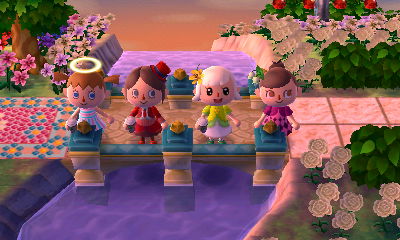 I had a very fun WiFi just last weekend with (from left to right in the pic) Jemma, Choco, and Teru! 😀 Since Jemma had just gotten AC:NL for the first time recently, and Choco had just recently regained access to AC:NL, we felt we should all have a group WiFi again like the one we had back in Wild World 🙂
(I should probably say, though, that we tried this group WiFi once before, but I slept through it >_< I made sure to set two alarms this time 😛 )

Ah, how times have changed ❤

We went to all four of our towns during the WiFi, but started off in Citàlune since I had some gift piles laid out for them, and I knew Teru was hoping to invite one of my moving neighbors to live in her town (*pssst spoiler* Erik!). 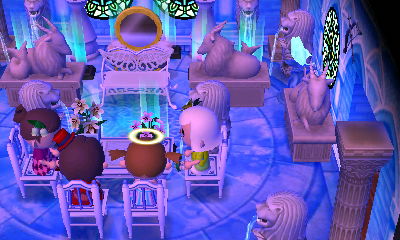 This is the first time this table in my main room has been full! 😛 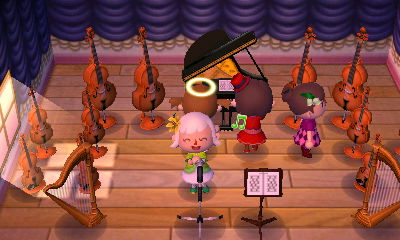 Then we all played music together; it was quite cool hearing that many instruments at once, along with K.K. Sonata.

Playing rock-paper-scissors to see whose town is next! Teru won so it was her town, Arcadia 🙂

When I arrived in Arcadia, I was eager to see this spot because it’s a homage to the red tulip cedar forest from Teru’s Wild World town, Bundeena ❤

Having a chat with an old neighbor, Phoebe 🙂 It’s great that we can just pick up where we left off whenever I go visit Arcadia. And my dad asked once if I still had his old neighbor Phoebe, and I told him no, but that a friend does 😛 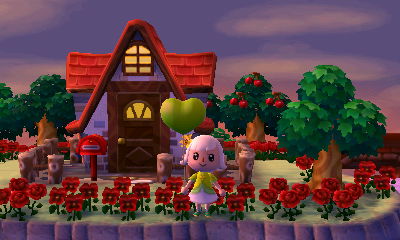 A pretty new addition to Arcadia is this riverside cottage! It belongs to the new character Storm, which is a fun chara-name to go along with mayor name Rain. 🙂

I remembered Teru saying that she built the cottage in the location that she did so that it could be viewed from across the river, so I wanted to go see that view for myself! ❤

I also think it’s gorgeous to see flowers on the other side of a river, which is something Teru has made use of beautifully 🙂 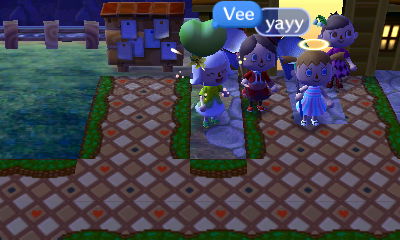 Here we all are, arriving and taking our first look at Delltune! 😀 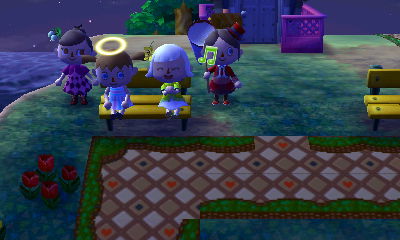 I’d been to Delltune soon after Choco became mayor, and it was great to visit it again later after she’d made many changes and additions to her town 🙂 These two benches are near the (already-built!) cafe.

A really nicely designed plaza! I always enjoy seeing what people do with their town tree areas. 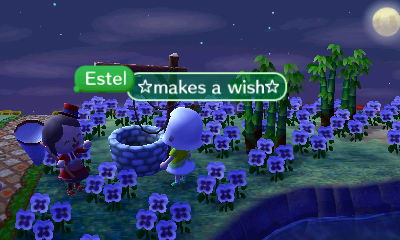 Ahhh, this well spot looks so gorgeous with the white pansies in the moonlight *_*

And this little jut in the cliff near Choco’s house is put to great use with the bench nestled right against the edge, looks great!! 🙂

The final town in our little tour was Jemma’s town Lilycott (my first visit there!):

I remembered some party poppers and things I’d brought, and we set them off (not timed perfectly, but that’s about impossible) at Lilycott’s pretty entrance. 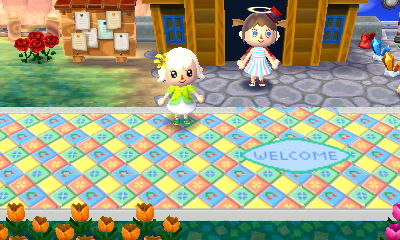 Tehe, got a morph shot of Choco and Jemma! 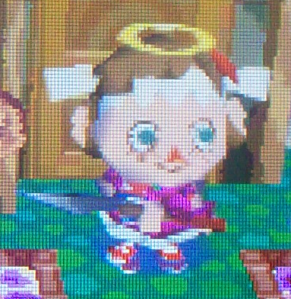 I loooved Lilycott’s welcoming sign at the train station, and the little flowerbed accents in the middle of her three-space wide paths!

A colorful rose garden near the Re-Tail pond 🙂 I think the pattern squares were for working on a gridded map, maybe? 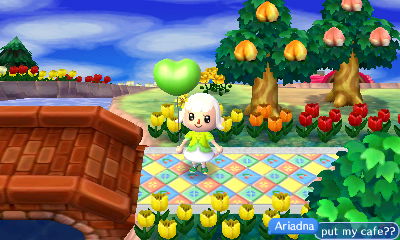 Another cute, colorful spot in Lilycott. 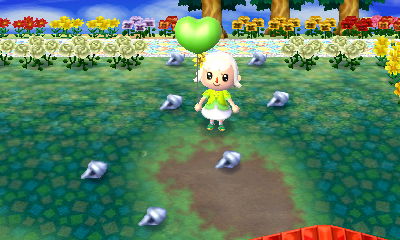 Ooh, got to see her creative seashell path in person! 😀

I also wanted to make sure to visit another interesting location in Lilycott, the secret beach filled with blue flowers, before it was time to end the party. Lilycott is looking so pretty so far, Jemma! 😀

Thanks so much to you four for trying out this group WiFi a second time, and I’m sorry again about missing the first. >_< I had a lot of fun and loved seeing everyone's towns! 😀 And thanks as well again to the other WiFiers in this post! ❤