Haha, I feel like with every new WiFi party post, the fact that I haven’t posted on my own towns in a long time becomes more conspicuous. (Well, at least I’ve been pretty good about posting on my WiFi visits, right? >_>) I’m really sorry guys, that I don’t have as much time to dedicate to Animal Crossing and this blog as I would like to. But like I said in my last notice, when I have spare time I’ve been working on my patterns page. It’s something I’ve wanted to do for a long time, practically since I started this blog, so I wanted to dedicate some time to working on that alone. Once I’m done putting up some more spring-suited patterns (I’ll put up the winter and fall ones later), though, I do want to start working on getting my town caught up. Because yes, it’s still in winter, as you can see:

This was at least a few weeks ago, I think. Claire from An Ville came over for a new haircut and we also chatted and had a fishing contest. I didn’t take many pictures but it was a good time. 🙂

Today I went to a party hosted by Anna (some of you may remember her better from my blog as Skye or from ACC as MonkeyDoodle) in Lilypond! 😀

(I’m sorry in advance for the poor quality photos, especially compared to the pictures from the party in An Ville, but for some reason my camera has a lot of trouble capturing AC:WW in the evening. :()

The first thing she did when I stepped through the gate was give me a present, sweet! 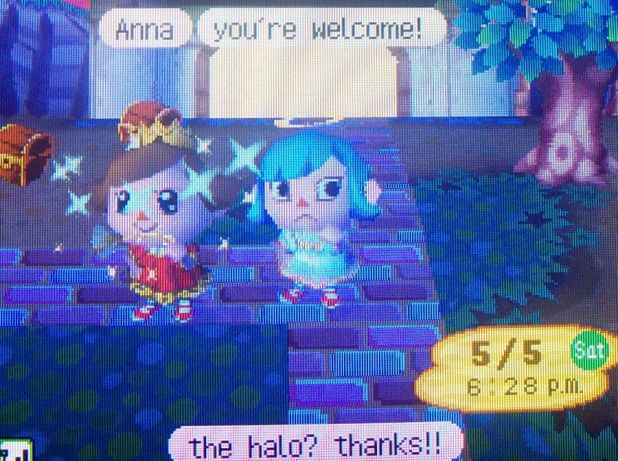 It’s a halo! Thanks a lot

And hey there, anime-eye Anna. 😛 The glitch occurred when she was changing accessories and I happened to get a picture.

Aww yay, I think this is the first time I’ve seen someone use a pattern from my patterns page! This is meant to go with the fenced-in pansy border, and that’s why the bricks are rather plain, but it still looks fine by itself and the pansy patterns are probably too complicated to copy.

The first party activity was a game of tic-tac-toe! 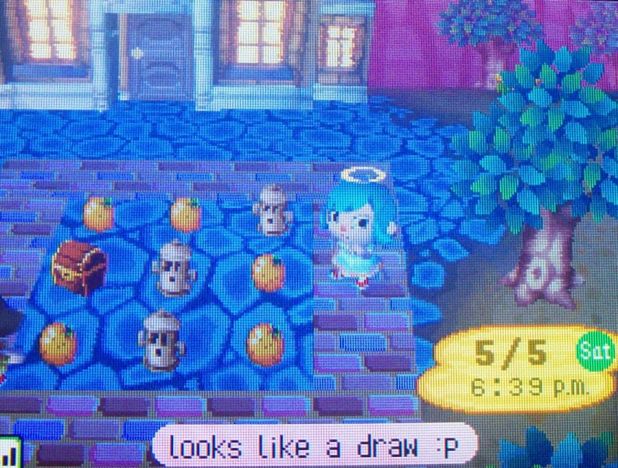 Mine are the oranges, and hers are either gyroids or treasure boxes. As you can see, the first game was a draw.

For the third game, I went first and implemented the “corner trick” I remember from when I was little. If you go first in a corner, and your opponent doesn’t go in the middle, you’re pretty much guaranteed to win if you choose a different corner next. Well, I bet everyone knows this, but maybe we were going easy on each other so that every game wouldn’t be a draw. 😆 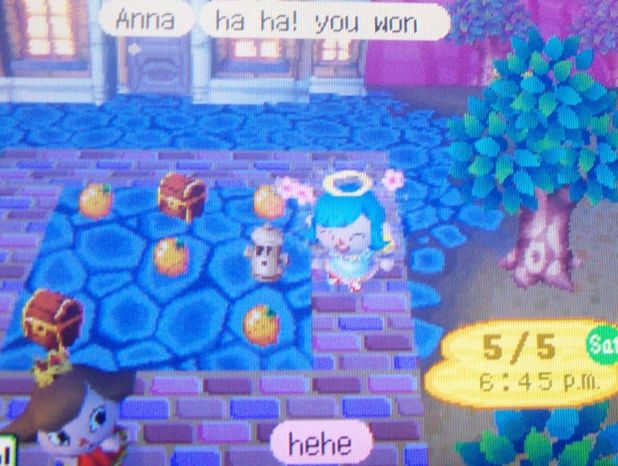 Anna told me that one of my favorite neighbors lived in her town, so we went to visit…

Hugh! He actually isn’t in my very top tier of neighbors, which includes Melba and Bob, but I like him a lot because he’s unique-looking and I think his facial expressions are always amazing (just a few examples above).

I like his house shape and this house style a lot, too, and wanted to see what other houses she had in Lilypond. I don’t know, it’s probably weird, but I really like the houses in AC:WW, there’s such a wide variety and combinations of different styles and shapes.

I like this second house style, too, yellow stone. 🙂 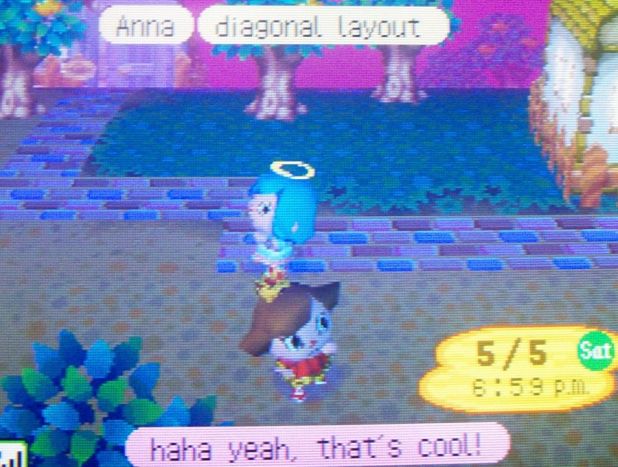 She pointed out the diagonal formation of her neighbors’ houses, which is awesome!

It’s easier to see on the map:

This is one of the cooler house shapes because of the double roof thingy (lol); Truffles here has it, as well as Rolf, Bluebear, Static, Curt, Mathilda, and probably others I’m forgetting. 😛

I thought there was a nice stone connection with the first two house styles, so I was surprised to see this one, a wooden house style that I have in Dafdilly. It probably doesn’t appeal to everyone, but it’s one of my favorites and I resetted for it, I love the colors and checkered doors.

I heard a mole cricket nearby, they’re always fun to try and catch. I found it in the first hole I dug. 😮 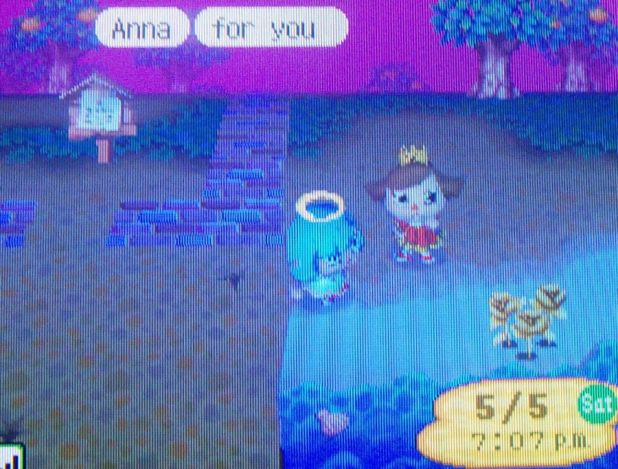 All of a sudden she gave me another present! Thanks so much, I hardly have any gold roses (I think just one), so this is really generous and I appreciate it a lot. 😀

Haha, really…? His house was warm and cozy with all the places to sit and K.K. Country playing.

When we went back outside, Anna and I were morphed! She said it was her first morph so I’ll put several pictures: 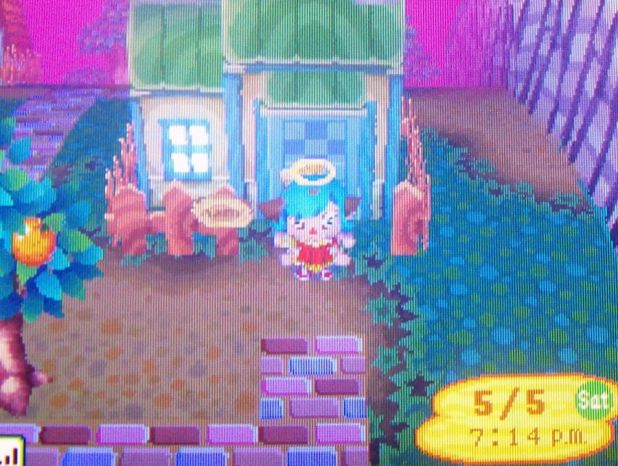 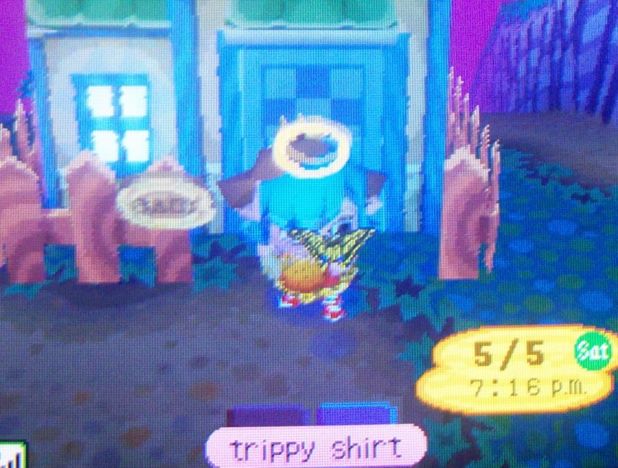 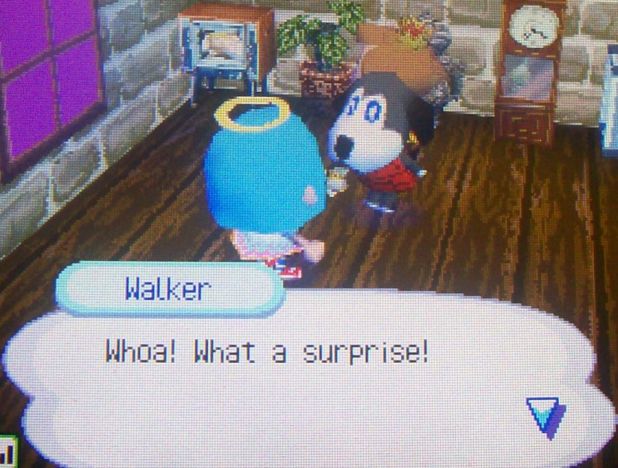 Then I met Walker, wow, his eyes are such a bright blue. 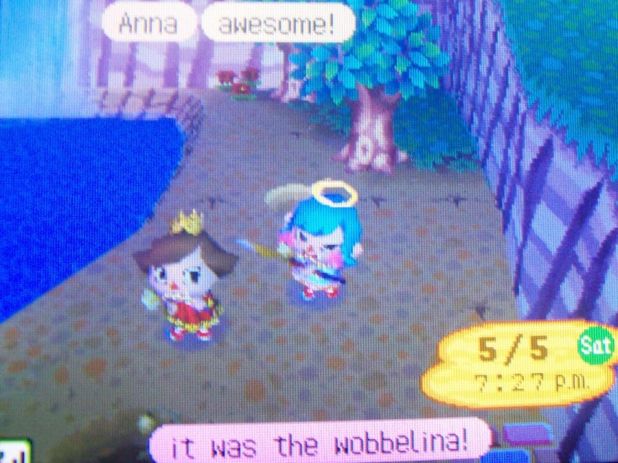 Then we played another party activity, which was a game to dig up the correct object, a wobbelina. I had three tries to dig up the wobbelina but got it on the first try 😛

For a prize I got a rainbow feather, it’s beautiful 😮 Thank you so much!

She realized she hadn’t shown me her house yet, so led me there. 🙂

Nice regal room, I really like the combination of the regal carpet and blue-trim wall. 🙂 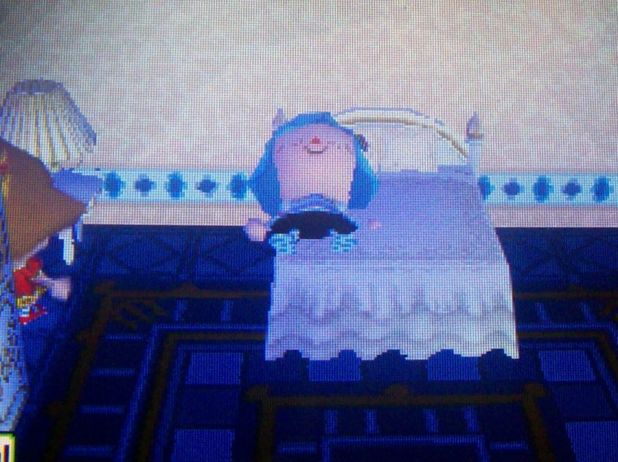 Worn out, we decided to take a nap. 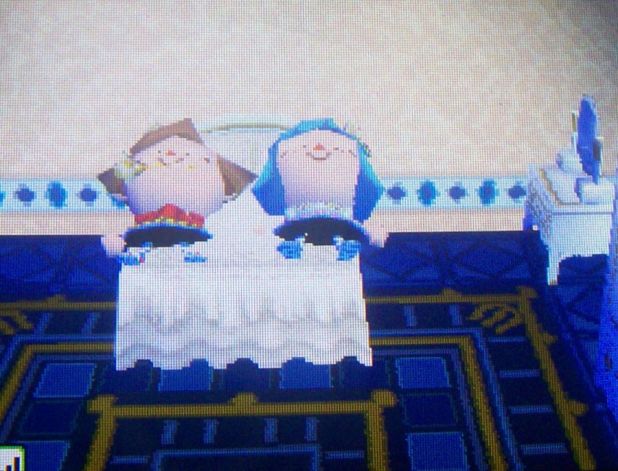 At first we slept peacefully…

But that didn’t last long xP

Haha, I love our glares here.

Yay, someone else came!

I’m glad; it looks like Anna worked hard on preparing the games and prizes, so it would have been a shame if I was the only guest.

I don’t often WiFi with new people, so it was really nice to meet someone new. 😀

Anna suggested a race next, so here we are on the starting line.

I fell in about three pitfalls 🙄

I took so long that Anna called out “Twisk?” like I was lost. xP Good job, Clone, you were obviously better at evading them. 😛

We chatted some and lined up for a group picture, which I think Clone 1 was confused about before we explained. 😛 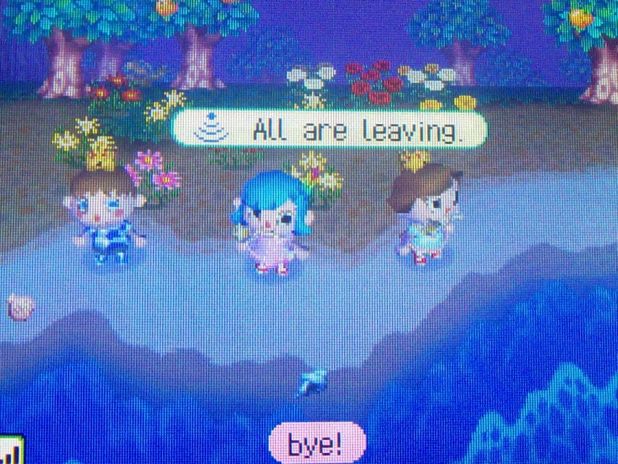 Then it was time for Anna to leave and party over. Thanks for such a great party and all your wonderful prizes and gifts, I had a really fun time! 😀

31 thoughts on “Party in Lilypond”