I didn’t play much in Dafdilly yesterday, partly because I spent time looking for the perfect town on my other gamecard, and partly because Nook’s was closed for remodeling and I was disgusted with all the items littered on the ground that I couldn’t sell. It was thunderstorming, though, and I do love stormy nights in Wild World.

My super impressive ( 😛 ) lightning capture from the thunderstorm yesterday!

I started playing late at night again today, but did more things!

You know, I’m surprised I haven’t seen a special visitor in Dafdilly yet! 😮 I must have missed Pete a few times, and maybe even Gulliver. Nook didn’t sell a slingshot until today, though, so I wouldn’t have been able to shoot either of them down anyway.

This is my house after its second expansion, with a lilac roof. I thought it would be a lighter purple. In the background you can see my second hybrid, an orange pansy! 🙂 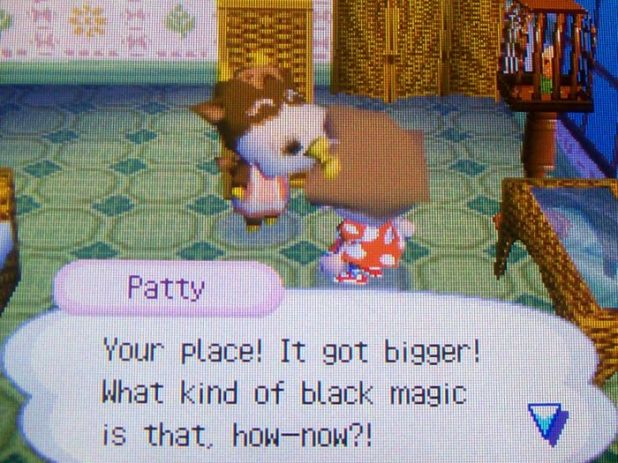 For the first time here in my new town, Tom Nook isn’t expanding his shop again the very next day. Before I can upgrade to Nookington’s, I need to have a character from my dad’s town visit (through DS-to-DSing) and buy something first. Today I was happy to buy a watering can, slingshot, and fairy-tale floor to replace my green carpet! 🙂

Later on, Rod and Puddles gave me their pictures! Here’s what they look like:

I really want Joey’s picture, I hope the lazy glitch hasn’t been activated. 😦 The glitch only happens with lazy characters, and it’s triggered when they run up to you to try to give you something, and you either ignore them or your pockets are full. Then afterwards, whenever they try to give you something, they’ll say that they are giving you the thing in the dialog, but they won’t actually physically give it you. But no need to get too worried about a glitch that probably hasn’t occurred!

This is what I’ve done with the new space in my house so far: 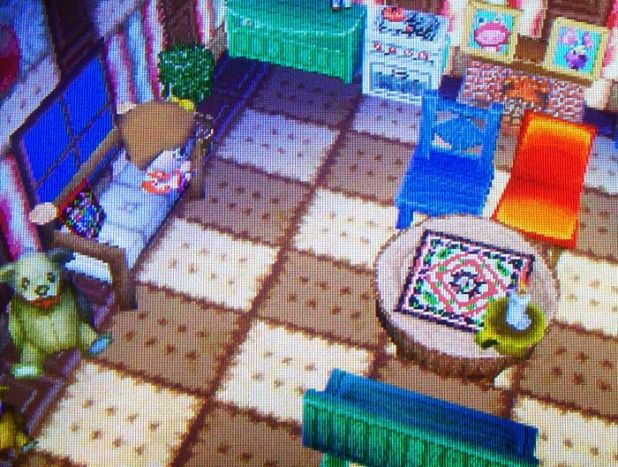 It’s inspired by Melba’s house! 🙂 I’ll probably change it to something summery when I have more options. I received most of this furniture as presents from neighbors, not from Nook. Sending one-line letters with presents attached gives you fruit/clothes in return (which I need to do badly), two-line letters give you furniture (which I’ve been doing), and three/four-line letters give you wallpaper and flooring.

4 thoughts on “Grand Opening of Nookway”