I had to wait quite a few days to get a replacement villager from when Vesta moved out, but when I finally got to meet her, I was very pleased! ^_^ She moved in today, but I have a few more things from previous days to go into first.

In my last post I mentioned that I’d be getting a turquoise roof; here’s a picture taken the following day of what it looks like: 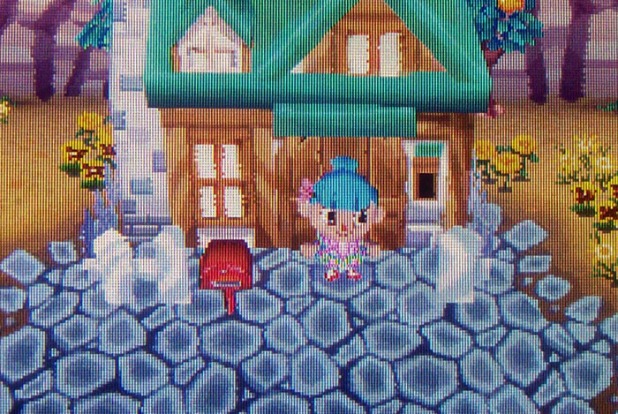 After that I changed it to sky blue and kept it like that for a few days because it’s probably my favorite roof color, but tomorrow it’s going to be purple!

The color of the grass also changed that day (23rd). There’s a higher contrast between the “background” and the square-shapes in the grass in my town now; some of the squares are even lime green! It’s certainly more eye-catching than before. 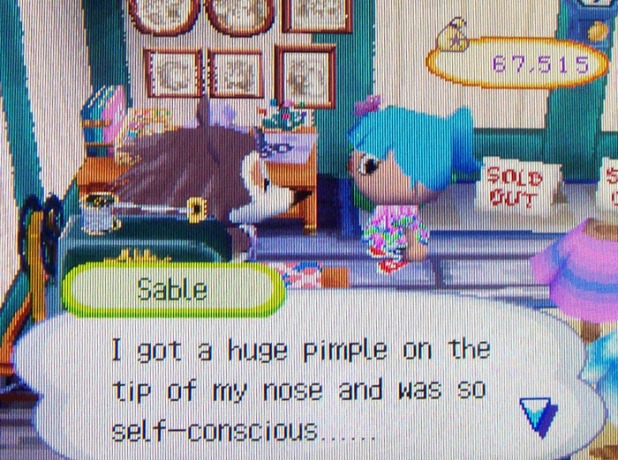 Still on the same day, Sable told me about the day one of the photos on the wall was taken, when she had a large pimple on her nose. I wasn’t quite as moved as I was from some of her other stories — so much fuss over one pimple! 🙄

The next day Sable told me how she had once broken all Mabel’s toy marbles over jealousy. But she ended her stories to me (because the next day she began the day of the week comments) with a touching note, remembering how her parents would check up on her and Mabel at night. 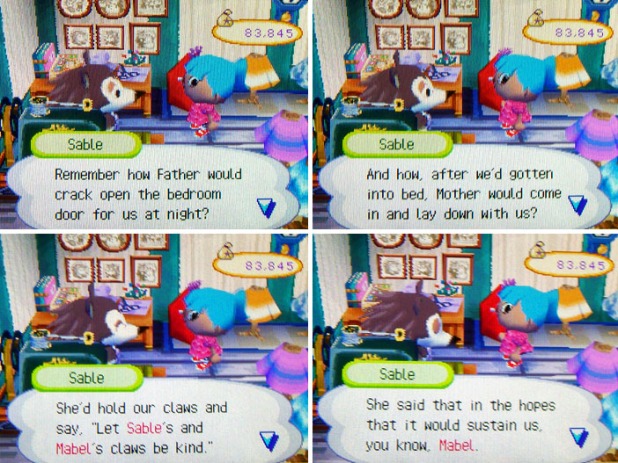 Crazy Redd came yesterday for his weekly visit. This was his stock: 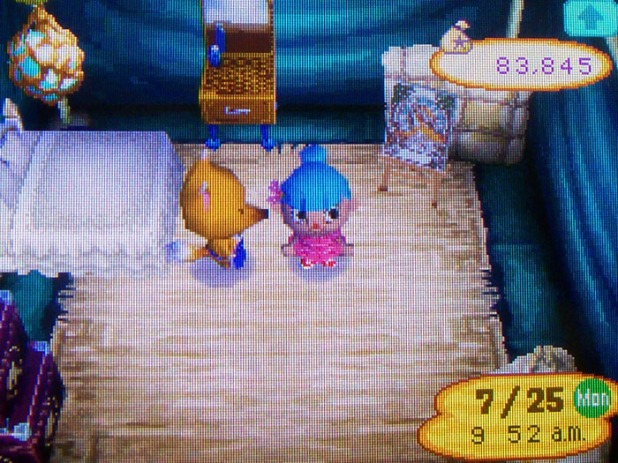 I bought all of it! (I’m not stingy with money in Animal Crossing 😛 )

The opulent painting was real — that’s two in a row! 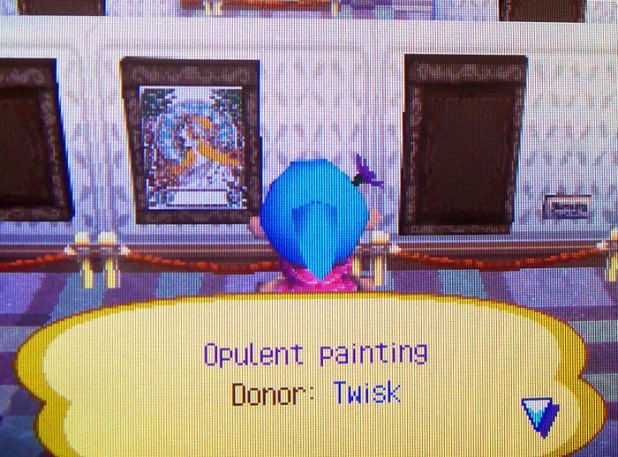 The real one is “Zodiac le Plume” by Alphonse Mucha. I love art nouveau, so this is fun to have! ^^

We’ve arrived at today. 🙂 I was watering flowers when Olivia decided to run up and ask a random question. 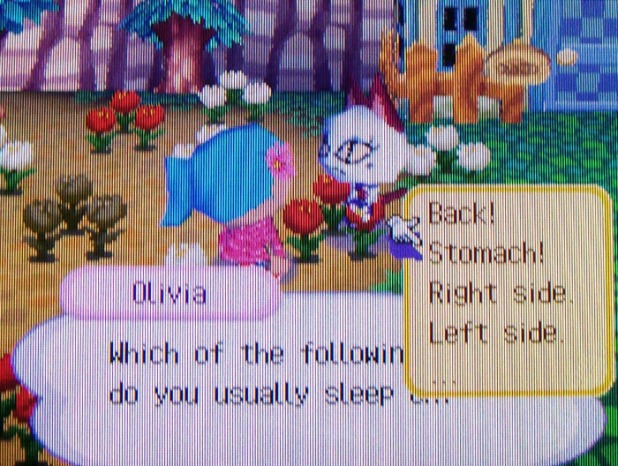 Stomach for me, I have trouble sleeping any other way. But Olivia agreed and gave me a… 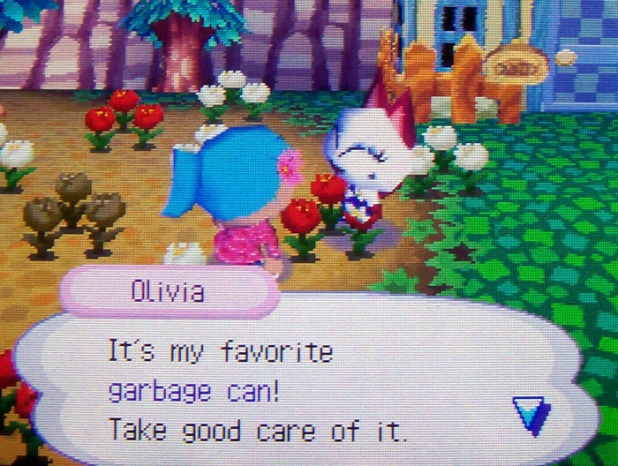 lol thanks Olivia… I will?

I found Dr. Shrunk wandering around in Dafdilly today. He offered to teach Twisk one of the following emotions: happiness, disbelief, laughter, or blankness.

I went with happiness. 🙂

Bell, Harmony, and Melody all learned shyness, which must be the default first emotion.

I got a chance to use my new emotion when I saw who moved into Dafdilly: Kiki! 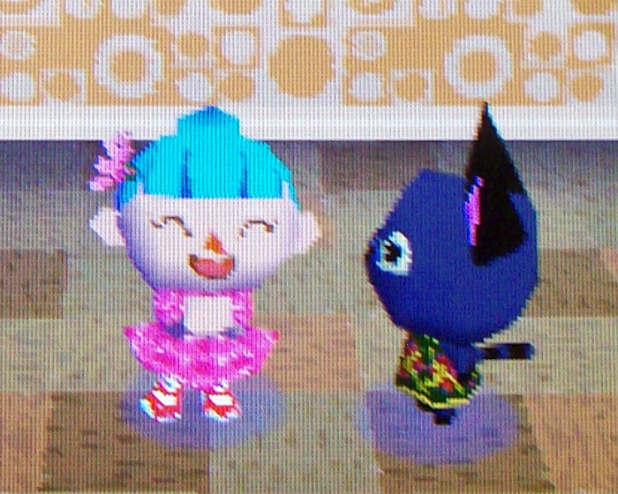 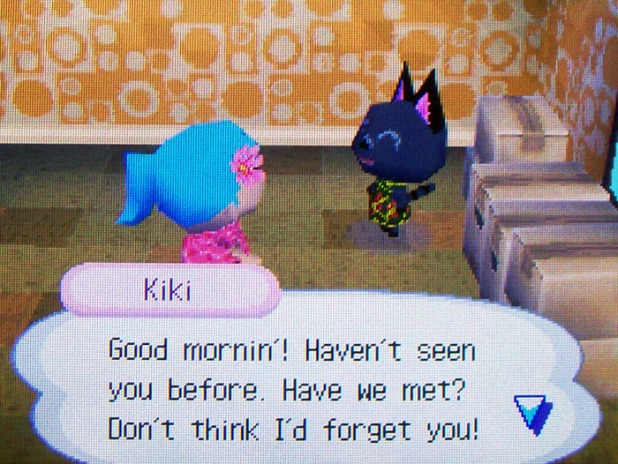 She’s one of my favorites since I have my own black cat with big gold eyes. 🙂 The lazy personality would fit my cat better, though, and in general fits cats’ personalities really well — which is why I want Bob! 😛 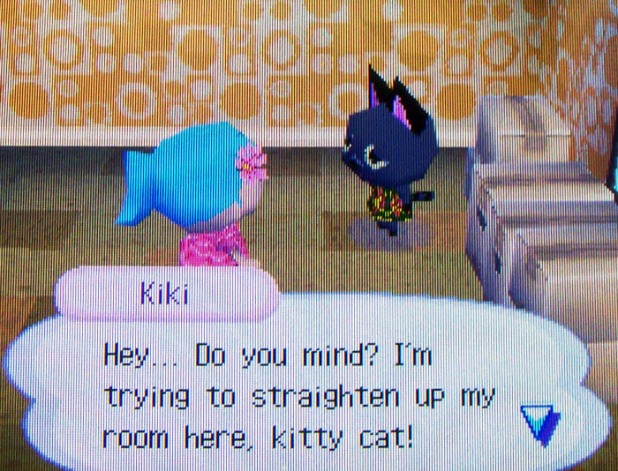 Fine, I’ll let you unpack. We’re gonna have to do something about your carpet/wallpaper combination, though!

This is her riverside house, by the way. Rod used to live here. 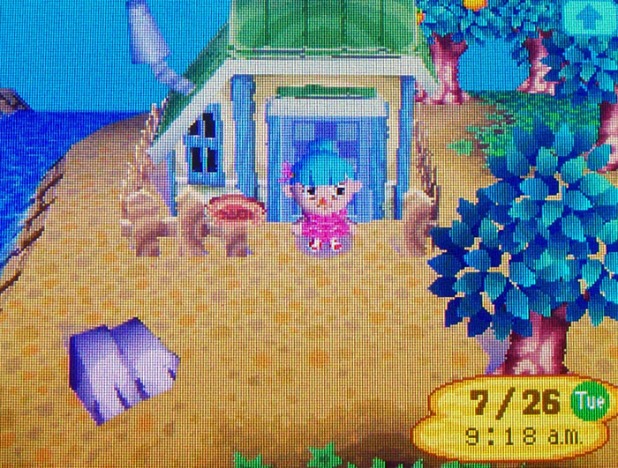 Apparently Rowan does not know how to play rock paper scissors. 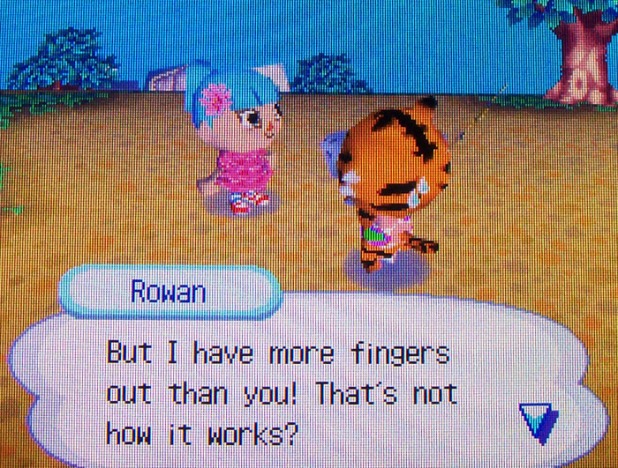 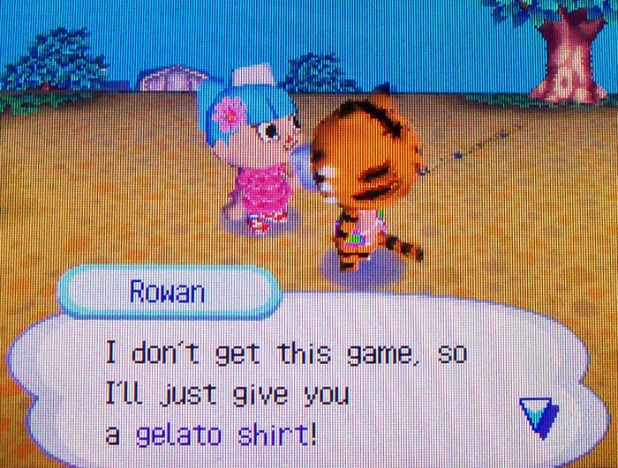 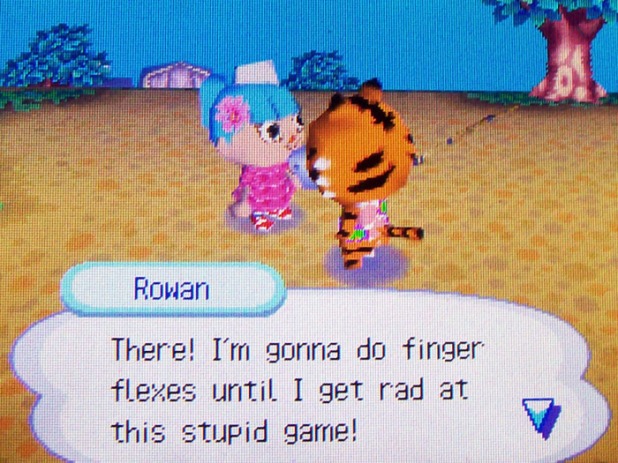 Good luck with that, Rowan. 😉

To end this post with something random, here is my favorite river I’ve ever seen in Animal Crossing! 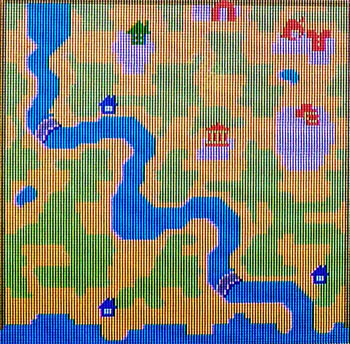 I saw it while resetting my other Wild World cartridge, trying to find the right town for Trildale. This town had none of the house types I wanted, though, so it wasn’t even close to a town I’d consider keeping. 😦

4 thoughts on “Finally, a new neighbor in Dafdilly to replace Vesta”