Dafdilly now has enough greenery to be considered a perfect town in the eyes of town residents, and the game’s standards! 😛 Quite the milestone and achievement for my new town! 🙂 Other happenings include a makeover for my character Melody, and a reward from the HRA.

After my WiFi session with Kammile on Saturday, I got a nice letter from StarCity’s Kabuki!

And in my last post, I told you about my newest neighbor in Dafdilly, Kammile’s Lobo! This is a picture of his house, one of those full pictures I like doing now. 😛 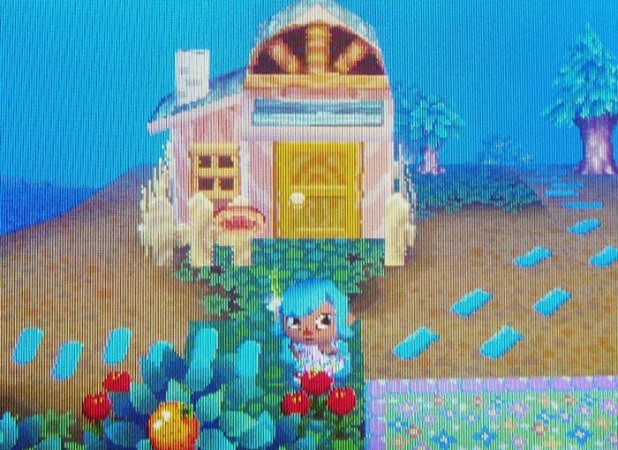 I got another important letter Sunday morning, this time from the HRA: 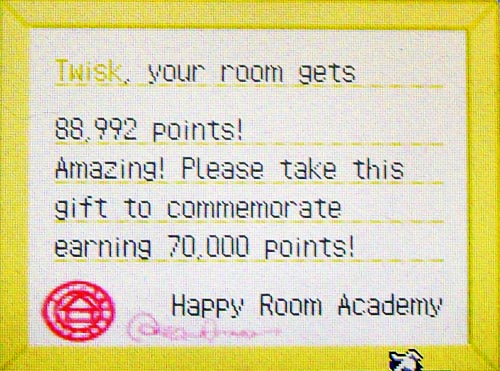 I was pleasantly surprised since I don’t try to get high HRA scores, but when I thought about it, my score is actually kind of pathetic since I have a mansion! 😛 Eventually, I may strategically and temporarily arrange my rooms to get the other house models, but I’m not in any hurry to do so. 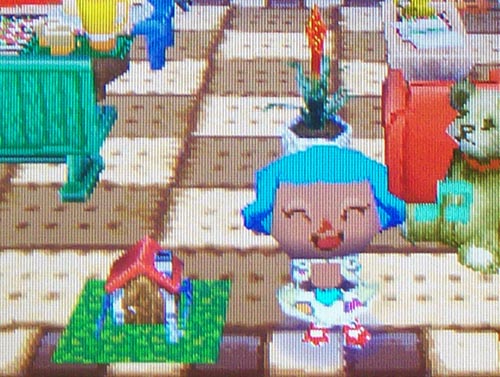 A picture taken today of what the one-story model looks like. It will just sit in storage unless I decide to do a town model room one day, but it’s still a cool collectible to have.

Nothing good at Redd’s Monday, I have these things. 😦 Stock a cabin chair, please!

Look what I found when watering my flowers! 😮

I still have the one Kammile gave me, so now I have a pair of them by my house. ^_^

I knew what that must mean, so I went to go check in with Pelly:

Sure enough, she gave me the perfect town report! 😀 Even though I have perfect town status, it doesn’t feel that way because I need to do some serious cleaning. All four of my characters’ dressers and inventories are a mess! Well, it’s better to have a cluttered dresser than a cluttered town, I guess… 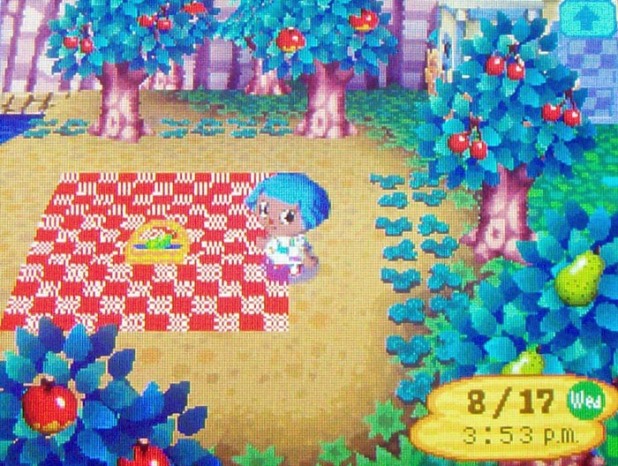 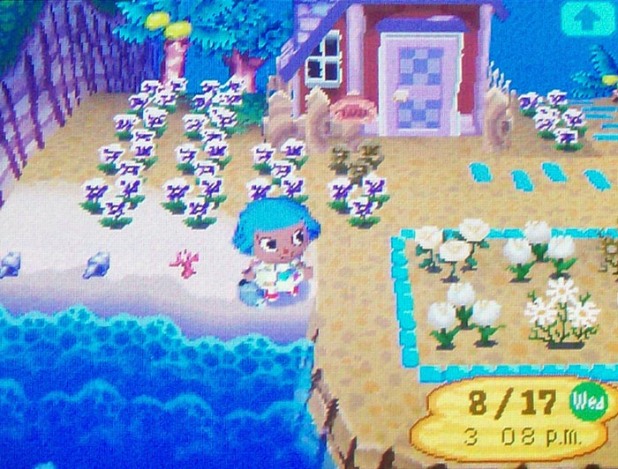 Olivia’s garden here has been working hard to grow me blue pansies! One even sprouted on the sand.

I just wish Kiki’s garden would do the same, I don’t have any purple pansies yet. 😦

When I showed Kammile around my house Saturday, she was honest in telling me that she didn’t think Melody’s room décor matched up with her name. To be honest, I just liked the idea of having a modern/chess room, so I gave it to Melody since she was the last character. But I thought about it more and decided to give Melody a new, more fitting personality (well, more like taste in furniture/clothes) and transfer her old personality/tastes to a character who will live in my second AC:WW town, Trildale (once I find it).

The first step was to give her new hair and clothes.

Quite literally, it is! 😛

From left to right: the original Melody, the old Melody, and the new Melody. 😛 I think her wide-open eyes make her seem alert, plus I got a sporty vibe from her first look, so that’s what her new personality will be. I do think she’s cuter now. ^_^

This is how I designed her new room, to go with her new tastes. It’s actually more lazy than sporty at the moment, but that’s just because it’s summer. It might be a basketball court or something later on. 😛

I also updated the beds in the attic. Twisk has a mush bed now, which I brought over with my original character (who lives in my dad’s town), and Melody has a blue bed.

Twisk will get her own room — a mush room — in October. I’d rather steadily earn all the mush furniture again through Dafdilly’s first Acorn Festival, rather than unceremoniously bringing the series over with my original character.

Tom Nook had one of his “episodes” today, but I feel like it would have made more sense if he still had Nook’s Cranny. It feels like he should be pretty satisfied now, without a shred of bitterness about dreams or money, that he has the highest level department store possible!

I can see his point; it’s definitely important to be able to live comfortably! But beyond that, it’s also important to be happy with other aspects of your life, besides finances. Because to a certain extent, time is more valuable than money because life is short, so it’s best to make the most of it doing what makes you happy~! ^^