This isn’t a regular town happenings post, but a while back I made a gridded map for my town and hardly ever mentioned it on this blog again, so I thought it might be cool to have a post on how my gridded map has changed over time and how it’s helped me make decisions about my town. But please don’t feel like you have to read it if this sort of thing doesn’t interest you — heck, it might not interest anybody. xP

This is how my town was when I first made the map on day 10 or so, with trees and houses scattered randomly all over the place in their unaltered initial positions. (And whoops, I hadn’t filled in all the ocean spaces blue yet. 😛 ) I tried to play it cool in my early AC:NL posts, but I was pretty unhappy with my town for a while. I was spoiled by my AC:WW town, which I had highly developed and customized to my liking, and which had pre-set house locations that made sense with my town’s layout and the paths I set up, had no rocks that got on my nerves, etc. Meanwhile in my AC:NL town I had no idea how I was going to make paths that would satisfy me with this layout of houses, it seemed like such a mess. And I was reading stuff on forums about how everyone hated curvy rivers and that straight rivers were the best… I wondered if I should reset because of those things. (But in the end, I’m glad I stuck with my town and I’ve grown to appreciate my river.)

Then I started using the map for planning things, not just recording things in my town as they currently were. My town — and New Leaf as a whole — were still new to me, and I had no idea what I was doing at first. xP I don’t like these plans and I’m glad I didn’t go through with them in the end, but you have to start somewhere I guess!

Things of note in this plan:

Things of note in this plan:

Even before New Leaf came out, I had planned on making my fairytale train station and town hall “focal points” of my town as far as landscaping. The train station was pretty easy (I just put a 3×3 fountain in front of it, which I remain satisfied with), but I found it especially difficult in the beginning to figure out how to best landscape the town hall. I tried a few different things, like a bell and statue fountain, but neither really satisfied me.

Then I became really fixated on the idea of having an elaborate garden of bushes, fountains, and topiaries in front of the town hall that was reminiscent of a traditional French garden. I think it’s pretty funny to look back on my different plans for this idea! I didn’t know about the bush-planting rules/limits at this point 😆 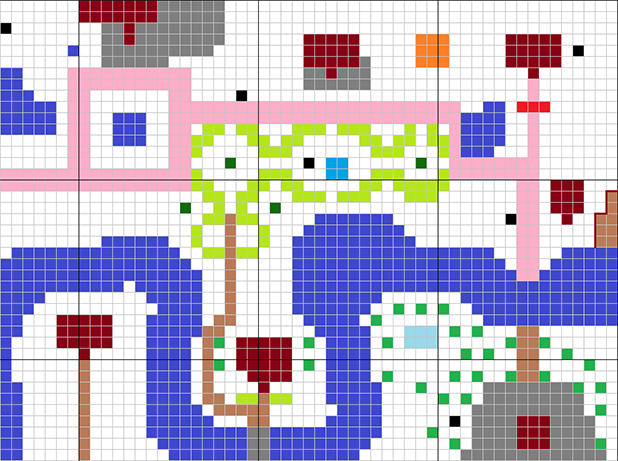 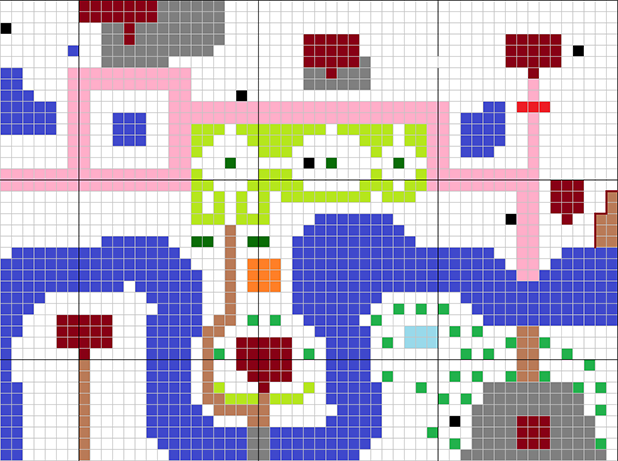 Things start to come together:

After mulling over those weird, complicated plans for a while, I finally started to have a few lightbulb(!) moments where things clicked into place in my plans in a much more simple, elegant, organized, and structured way. These were some of my moments of realization, and they didn’t happen all at the same time:

Instead of trying to force a complicated layout of bushes and fountains in front of the town hall, which will never work well because of the rocks nearby, why don’t I just move this landscaping idea in front of Estel’s house instead? (And even after I had this lightbulb moment, it still took me a lot of trial-and-error, wasted bush starts, and demolished PWPs before I arrived at the garden layout I have today!)

Then I thought if I’m going to have an elaborate garden in front of Estel’s house, maybe I should extend it all the way to the cliff/waterfall, and move Violet’s house (which was near the waterfall) to a different location — the nook in the river near the town tree? That way I can put a wisteria trellis leading up to the doorway, instead of behind the house like it was before.

I decided to make the dirt paths on the south side of town more direct instead of winding, so that I could have room to fit more stuff (villager houses, PWPs, trees and gardens) and make the paths more efficient at the same time.

Instead of having the path to the town hall right in front of the doorway, with landscaping below the path, I could move the path farther down, and then do some landscaping above the path. This would also connect well to create a really long, straight, horizontal path across town (connecting Re-Tail, the train station, and Lyra’s house) — an elegant, simple, and convenient solution!

For the entrance to the town hall, I just started off by putting a bunch of spare lilies and violets in a color gradient, since I didn’t know what else to do with the flowers. But I ended up falling in love with this, so it became my permanent town hall feature 🙂 (Unless something even more awesome comes to mind later, or something.)

I decided eventually that I don’t really need a cafe in Citalune, so I stopped worrying about how I could fit it into my plans. If there was like a fairytale-style cafe/restaurant or something, sure, that would be cool. But I didn’t think the cafe would fit my town very much, and I didn’t want to use up valuable space on the cafe that could be used for other things instead that would excite me more (like a special garden or park in the central river nook/peninsula).

After a lot of thought, I figured out what all my dream neighbors were and picked out locations for them that would be most fitting for their house styles. Most of them are placed along a narrow strip that might have otherwise been a wasted, useless piece of land — and now it’s like a cute little residential area filled with fairytale-style houses, and I love it!

I think you can see how all my lightbulb moments came together to form my current town plans, which are much improved from my early plans: 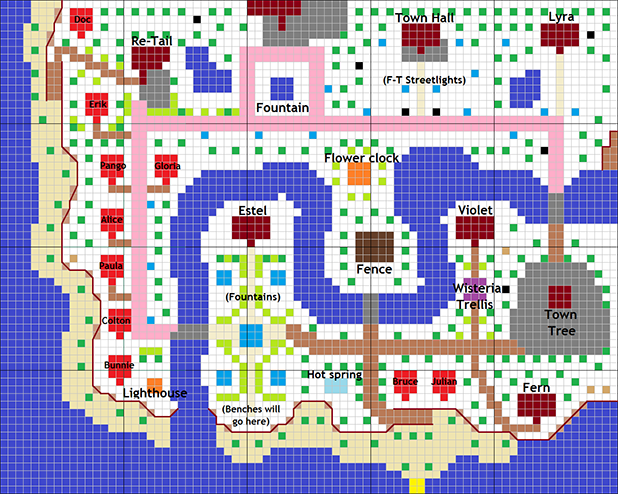 Just to be clear, though, this isn’t my final plan for my town! Once I get all my dream neighbors I can start improving PWP placements since I won’t have to worry about the reset trick anymore. Right now many of my streetlights are solely placed for house-repelling purposes.
(Oh and there’s a typo; the house labelled “Erik” should be labelled “Rod”)

Other uses of the map:

The map can be useful for planning gardens and flower arrangements as well! Most of the time I don’t feel the need to plot flowers on my gridded map, but if I want a certain arrangement of flowers to look super fancy, then it can come in handy.

I used it to plan out the layout of roses in front of Lyra’s house:

And when I was re-arranging the town hall flower field (in late Autumn): 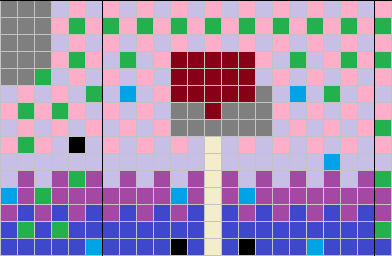 How I made the map:

If anyone manages to get through this post, I feel like a question that might arise is how I made the gridded map in the first place, so I’ll go ahead and address that! Though this is just the way that I made it, not the way it has to be made. Many people like doing these maps on graph paper instead, for example.

Step 1:) I made two patterns, each a different color and which would be easy to count. You can see the ones I made in the background of this picture: 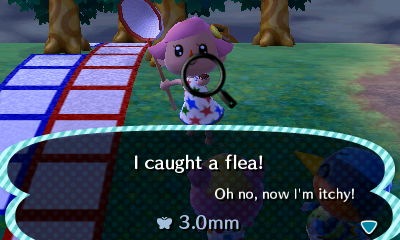 Step 2:) AC:NL towns are 5 acres wide and 4 acres tall, with each acre being 16×16 spaces. Starting below the train tracks in a corner of town, and working my way across town, I laid down patterns to show the borders of the acres, like this: 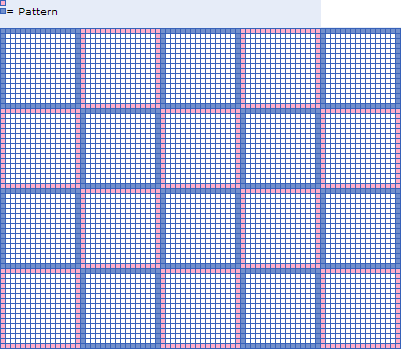 Step 3:) Then, focusing on one acre at a time, I started recording the different features in my town on a blank gridded map: buildings, rocks, water, the cliff-line, etc. I used holes and patterns to measure the distances.

Step 4:) I double-checked everything and saved my map, then I picked up all the patterns. If you think to do this, you can always just reset without saving after completing your map, so that you don’t have to pick up the patterns again like I did. 😛

Well, that’s about it for this long technical post. xP I’ve been asked a few times on how I put together my town, or for advice on other towns, and I thought it was a good idea to highlight in this post that it took a lot of work, time, and trial-and-error, that my plans weren’t fleshed out from the start, and that they had to evolve a lot over time before I was happy with them.