I thought I’d continue my trend lately of keeping WiFis separate from regular town happenings posts, seems like an organized way to go about it. Anyway, earlier this past week it was my pleasure to WiFi with Megan, who I’ve previously mentioned on this blog as Megan from Dreams and Megan from Blossom, and now she is Lana from Bloom! 🙂

Great to see you again! 🙂 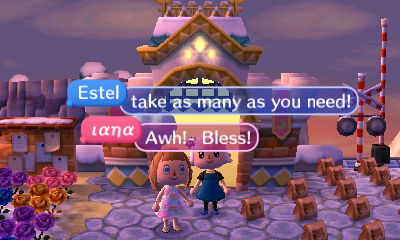 First she came over to my town, where I had some azalea bush starts to give her. ^_^ (I don’t know why I hoard bush starts so much; I don’t even have tons of bushes in my town, tending to line my paths with flowers instead…) 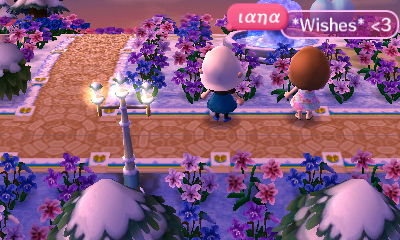 Throwing a coin in the fountain and making a wish? 🙂 (I’d almost forgotten that was a general tradition that existed, for some reason!) 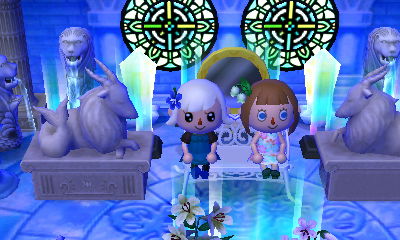 We toured around town and through the rooms in Estel’s house. Touring through all my characters’ rooms would probably be too much for one WiFi! 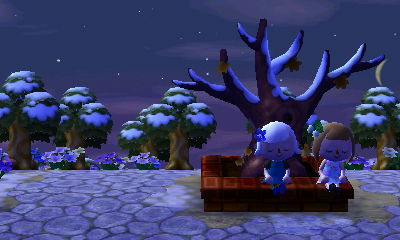 Took a pic of us sitting under the tree before leaving 🙂

Next we went to Megan’s town! (I took two pictures of this and both were mid-blink. -_-) 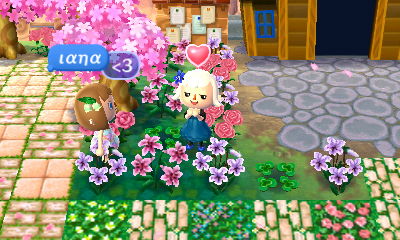 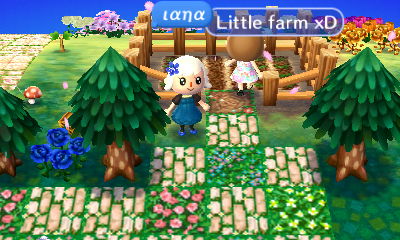 Then she led me to this adorable spot, a little fenced in farm! 😀 The fence isn’t seen as one of the most desirable PWPs, but it can have some cute uses like this!

When looking around her town I noticed some things about the layout that I thought were really cool — specifically, separate bodies of water that were very close together, like ponds next to rivers and a pond next to a pond: 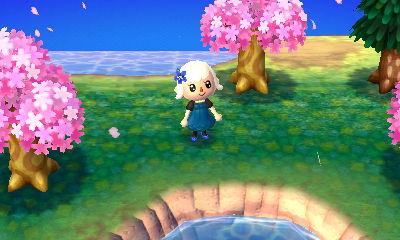 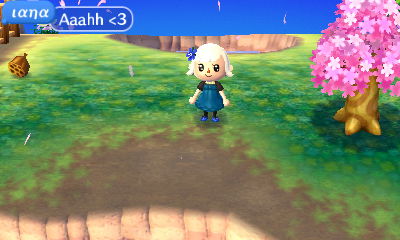 I just think these spots would be so fun to work with, I found myself slightly jealous! xP

Taking the opportunity to catch some spring bugs again~ 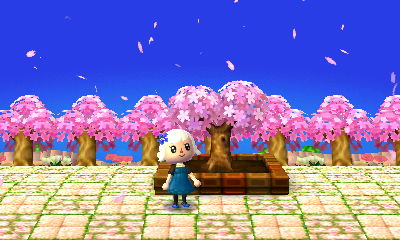 Such a cute little pink town tree, and the cherry blossom petals floating about were so pretty!

I gave her a golden axe for use in landcaping her town, since I have two extras, and I suppose she felt she should repay me (aw, you didn’t have to Megan!), so she gave me pretty much the whole princess series(!!!) and a bunch of cool headwear, like this tiara wig! Thanks sooo much Megan, that was extremely generous of you! I loove the princess series, so I look forward to using it in my rooms. 🙂

After looking around we played a fun “guess who” sort of game in which we took turns giving various clues to a certain villager, and the other would try to guess who. I stumped her on Chadder and Pango, and she stumped me on Cookie. 😛 It was a lot of fun! Thanks so much for the WiFi and the gifts, Megan!! ❤

11 thoughts on “WiFing with Megan”