Today was my first time WiFing with more than one person and also my first time attempting to host a “party” in my town! 😯 I was both nervous and excited about it, so please excuse any blurry pictures (because my hands were wobbly 😛 ) and that I forgot to take pictures of many key moments! I really need to get better at taking pictures during WiFi meetings. -_-

So what was the occasion, you say? Umm…back to school party? (Definitely not.) Perfect town party? (Sure! 😛 ) But really, I just wanted to have a WiFi session with several Animal Crossing bloggers I’ve met! 😀 Thank you so much Teru, Kammile, and Jemma for coming!

Teru’s character Rain came almost as soon as I opened my gates! She realized her brightness setting wasn’t ideal for taking pictures, though, so she left real quick to fix it. When she came back, Kammile and I were there to greet her and we took a group picture! From left to right: Twisk (me), Rain (Teru), and Kammile 🙂 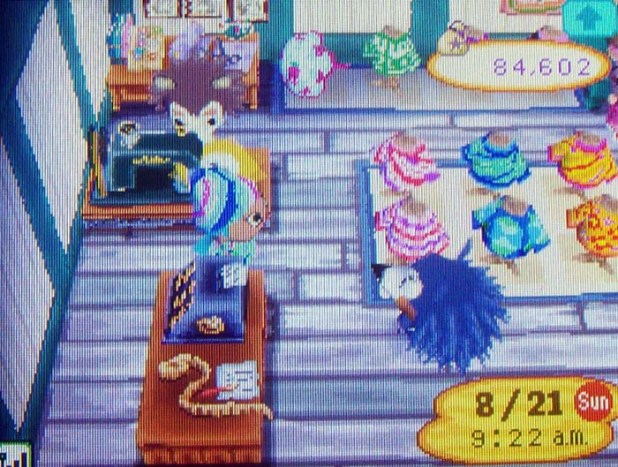 I made some outfits for the occasion; the party hats are in the back row (I thought diagonal stripes looked good for those) and the corresponding dresses are in front. I had each of my guests in mind when I made them: Teru’s is warm-colored to go with Rain’s hair and light brown eyes (but it’s more gaudy than I expected, sorry 😛 ), Kammile’s is pink because her main character likes that color, and Jemma’s is green and blue to go with her eyes. There was also a random pastel yellow one. 😛 But I didn’t tell them which ones I had in mind for their characters; they could wear whatever they want! 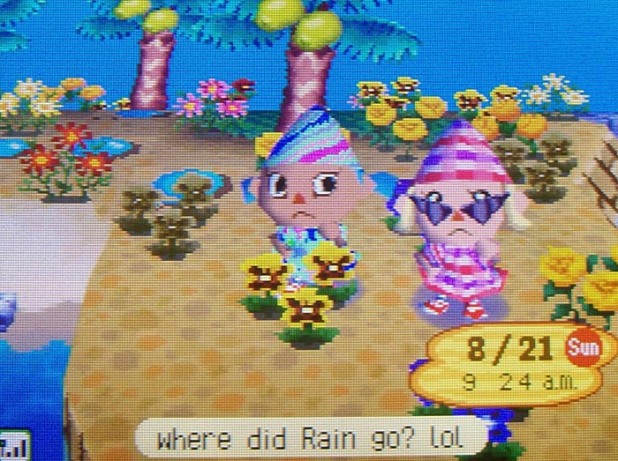 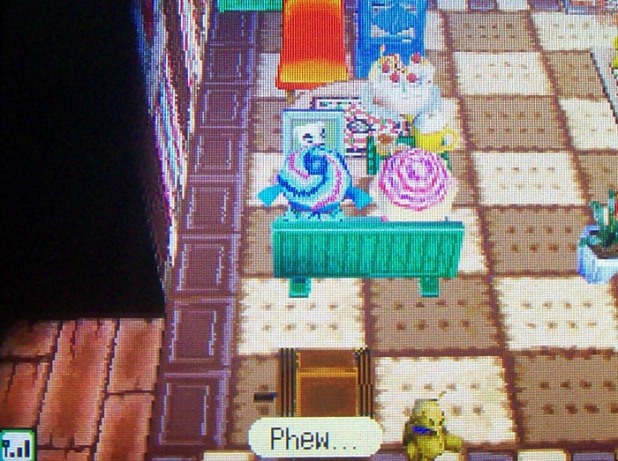 Having birthday cake and tea! We didn’t stay there long because I left to look for Rain. In later pictures Rain is back to her original hairstyle (it’s the one her face starts with), which I thought was a glitch at first, but now that I think about it, she might have gotten a haircut at Harriet’s (to look better with the party hat) during this time.

It turned out Rain was outside of my house, so here we all are having an emotion photoshoot. 😛 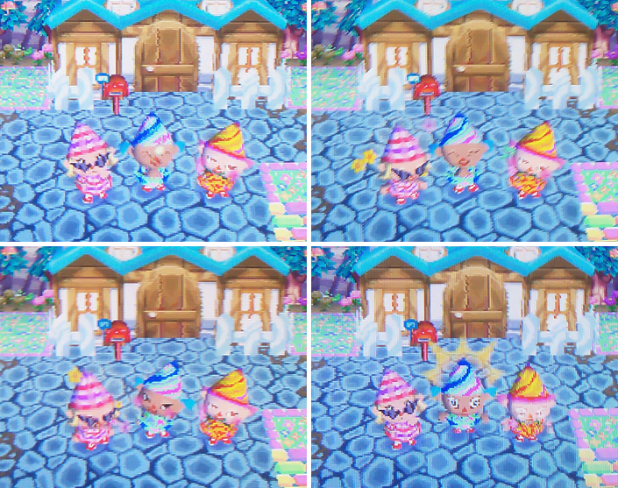 So after the photoshoot… 😆 Kammile and Rain checked out my house together and I waited outside. Not much has changed about my rooms since their last visit. 😳 I wanted to go all out for the party by completely re-decorating my town and house, with confetti and balloon patterns on the walls and fun music and interactive items. But that was an unrealistic amount to do in one day. 😦 I only had time to organize the games and design the party outfits and a few ground patterns like these balloons: 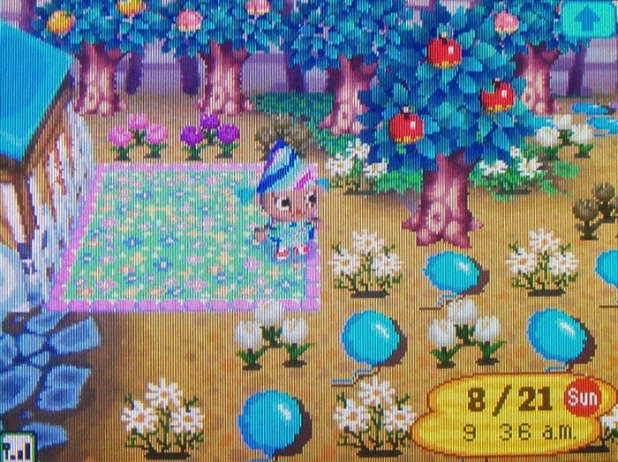 Yay, someone else is here~!

It’s Jemma 😀 And my town is full for the first time!

Jemma saved time by having her own party outfit ready, so let the games begin! 🎈

My very first net fight! Thanks for that experience, guys 😛

Trying to wake her up 👿 Looks intense in this picture

Jemma fell in one of the pitfalls I planted for the King Tut race, oops! We had a decent-sized chat before we started wondering why she was still struggling! Jemma didn’t seem to still be in the pitfall on her screen, though, and she was talking to us and everything — what a weird glitch! It was resolved when she entered and left a building, good idea! 💡

So before anyone else fell in any pitfalls, we started the King Tut race! The reason why the masks and pitfalls were included was because everyone runs at the same speed, so some luck factors like tripping and falling had to be introduced to make the outcome more interesting. There was a clear winner, but I’m not 100% sure who it was. I tried to keep my eye on the character who got to the finish line first, but as other identical King Tuts arrived, it became confusing. I thought it was Rain because she removed her mask and I think it was the same character I was keeping my eye on, but I can’t be sure. Next time (if there is a next time 😛 ) no Nile shirts! 😆 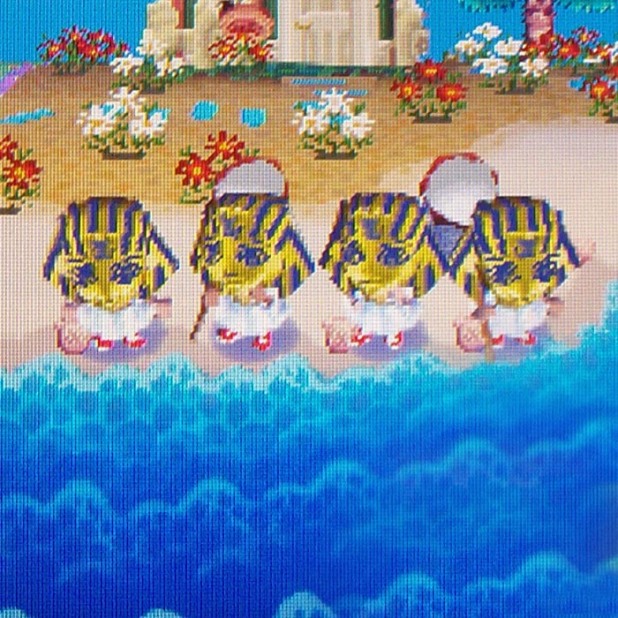 But the Nile shirts were good for another photoshoot! 😆

We were trying to get pictures of ‘sand angels’ and this was the closest I got. Splat! 😛 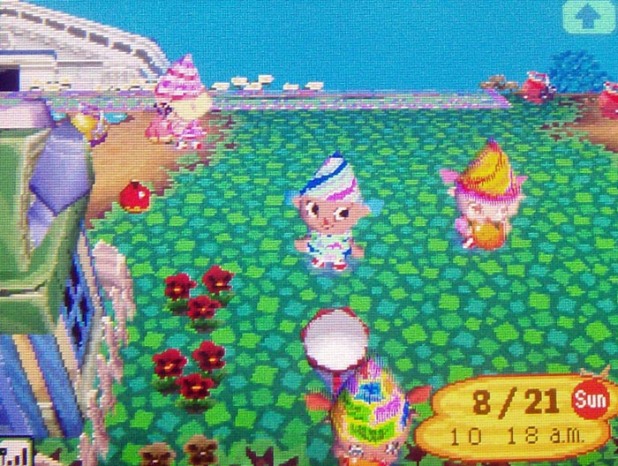 Next was a fruit-eating contest! I’m not 100% sure who won this either, but it was probably Jemma. I was expecting people to pick up a fruit, eat it, pick up another one, etc., but instead everyone picked them all up at once and began eating. 😆 My bad, I didn’t think that through.

Phew, now it’s time for a treasure hunt with no rules or things to measure. 😛 This is a pretty uneventful picture of buried treasure no one had found yet, but if I had taken it a second sooner, Jemma would have been in the background showing off what she dug up. I hope everyone found a few things! 🙂

Kammile fell into another glitched pitfall. I don’t get it — Rain fell in one, too, and got out quickly like normal.

We also played hide-and-seek for a while (because I took forever to find Kammile; I thought she was inside Nookington’s, not outside! 😛 ), distributed presents, and set off sparklers!

Enjoying summer while it lasts! 😀 I didn’t have anything planned after that and a few people had to go, so it was a good time to ‘party over’. I hope you all still had a good time despite the mishaps, like the glitched pitfalls, people getting lost, and flawed games/instructions! 😆 And thank you all again for coming, I was thrilled that everyone could make it. 😀

I spent the rest of the day studying, then I fell asleep early and woke up at 4 AM. I realized I still needed to water my wilted flowers before disappearing at 6 AM! 😮

I found this jacob’s ladder that I think Rain left to make room for fruit. Let me know if you want it back! 🙂 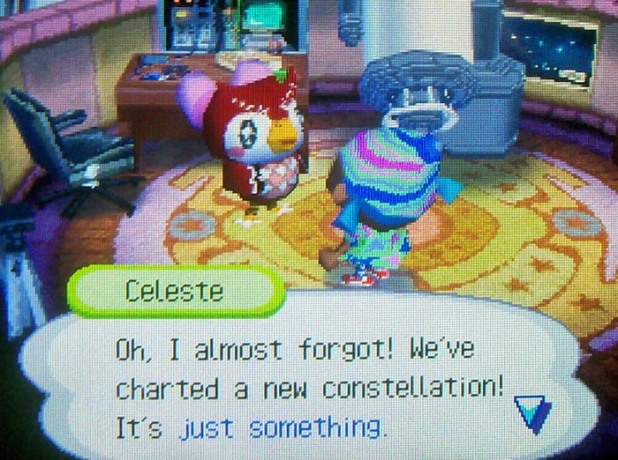 I was scared to check my town status after dropping items on the ground and clearing two areas of trees and flowers to make room for the race and eating contest, but it’s still perfect!

Well, it takes the pressure off to get Dafdilly back to normal immediately! 🙂

Feel free to check out Teru’s post here and Jemma’s post here for more pictures of this fun day! ❤

19 thoughts on “My first wi-fi party”