In my last post solely on Dafdilly, not WiFi meetings, I left off at New Year’s Eve in my town. I’ll start with a few last scenery pictures of this day taken on the start screen, and then move on to the beginning of my catch-up process. Please excuse any “TOUCH TO START” text and feel free to scroll quickly past. ^_^

The main path connecting my house and the gate.

Dafdilly’s lake. It looks so big at this angle, I want my character to swim or ride a boat in it. xP 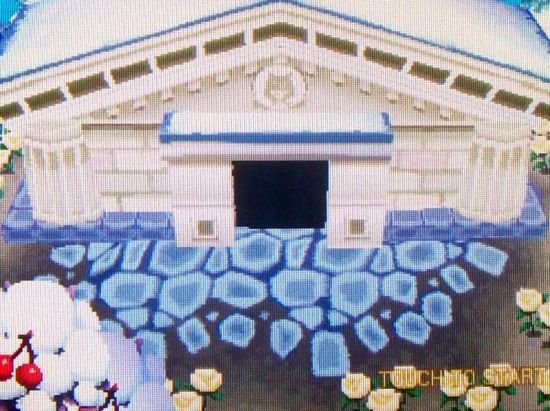 And Whitney’s house, with Whitney in the background 🙂

Well, as much as I enjoyed having my pristine candy paradise to visit (and not have to do any work :P), I couldn’t stay on that date forever: 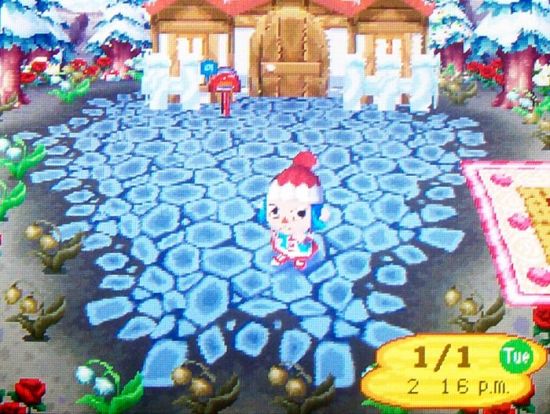 All the wilted jacob’s ladders in my garden were certainly not a welcoming sight as I stepped outside on January 1st. But the rest of my town wasn’t so bad, and there were some positive things too: the cedars were still lit, my mailbox was full of “Happy New Year” letters from villagers and from Mom (with bells!), and my favorite of all these things was the special music playing on this day. I almost wish I had done my town tour video on January 1st instead because of the music!

I also got a fortune from Tortimer: 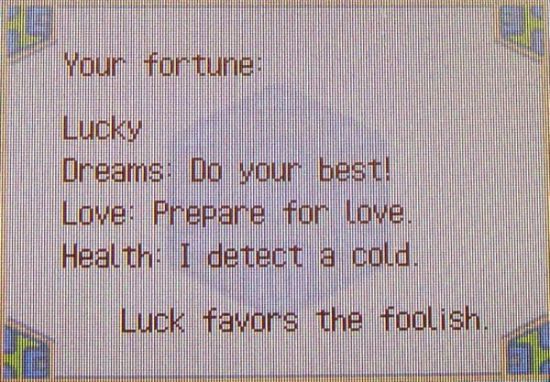 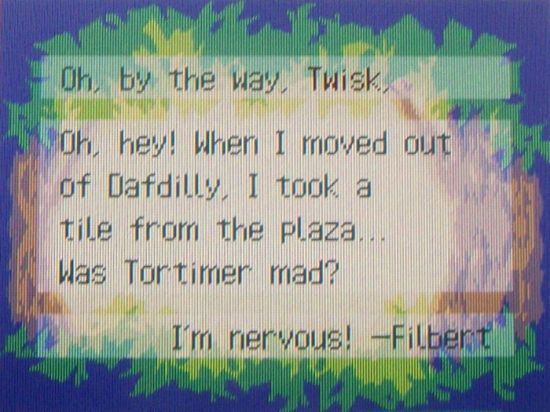 Filbert moved out, but not without taking a souvenir of Dafdilly with him, apparently.

The cedars are no longer lit, but this was a lucky day when no flowers in this area were wilted. ^_^

Look who moved in to replace Filbert: my own Kiki! 😮 She lived in Dafdilly for a little while, then moved to Red Bank, and now she’s decided to come back. She is wearing one of the patterns my dad made, but I think it was designed for an umbrella. 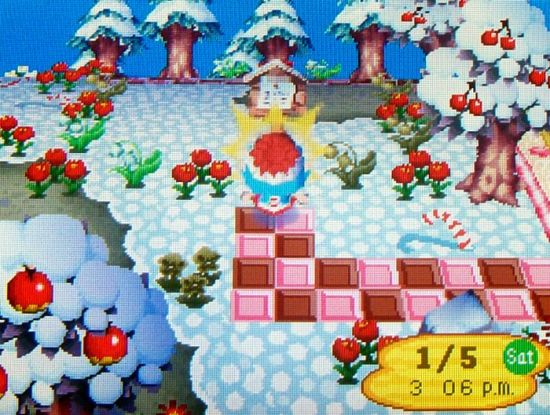 This, on the other hand, wasn’t a pleasant surprise. >_< I thought I had convinced Kid Cat to stay when he packed up, so the next day I was shocked to see this empty lot where his house used to be. But I DS-to-DSed with another town (a town I used for flower storage called Imladris) and he lives there now, so I can try to move him back to Dafdilly when he moves from there. 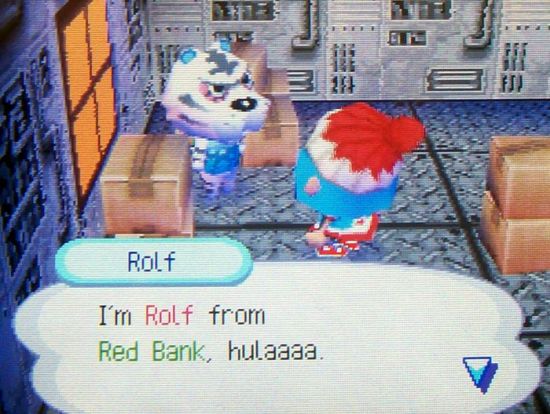 To replace Kid Cat was Rolf, another resident from Red Bank.

I actually specifically tried to move him to Dafdilly because I knew what his house shape was (each villager has a certain house shape): 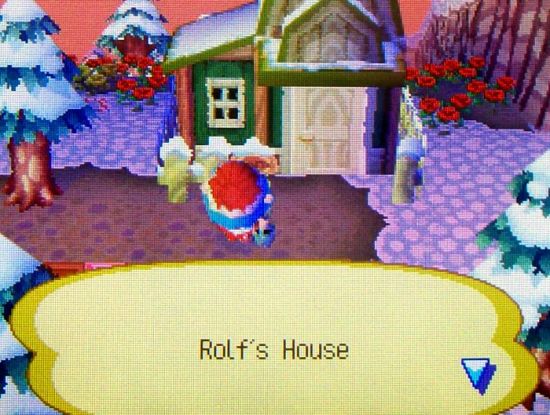 I was hoping he might end up with the pink and blue house style with the wooden fans, making his house look like this (which I love!). But like the three or four of my neighbors who had this house shape before him, Rolf picked the green house style I have in my town. I came to the realization that in each AC:WW town, all house shapes must have a specific designated house style. In other words, every time a neighbor moves in, it’s not like they have a 1/4 chance of picking any of the 4 house styles your town has. They will pick the house style that their specific house shape comes in (for your town). I looked over all the pictures I’ve taken of houses in my town and it all fits. 🙂 Just a bit bummed that I won’t ever have Rolf’s/Static’s/Curt’s/Sally’s house shape in that pink and blue house style with the wooden fans.

I let Kiki move away again… If Jemma was still playing AC:WW, I would have tried to move Kiki to her town, since she loved Kiki but her own Kiki moved away. 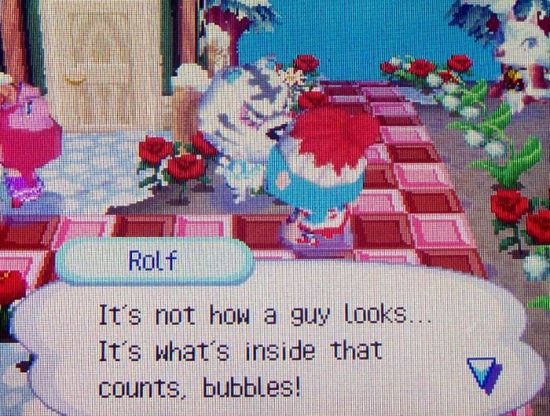 Rolf is interested in fashion and he wants new clothes, but I think he already looks great in this icy design. 🙂

A new house and new neighbor to replace Kiki. (But this is actually where Kid Cat used to live :()

It belongs to Mallary. When I first saw her, I thought “haven’t I had her before?” 😕 I was thinking of Maelle, another snooty duck whose name begins with M.

January 13th was Puddles’ birthday. 😀 I gave her a baby panda stuffed animal.

And a few days later she came to deliver a cake to me for my own birthday, just like last year. 😛 I also went ahead and painted my roof pink, with spring in mind. Maybe a little early, but you never know when to expect a certain color of paint at Nookington’s.

Mallary’s stay here was short-lived. Whoops, I named the file “Maelle packed up” 😆

Not being very specific there, Mom 😛

My neighbor to replace Mallary is Kitt. 🙂 I’ve never had a kangaroo before, their babies are so cute! 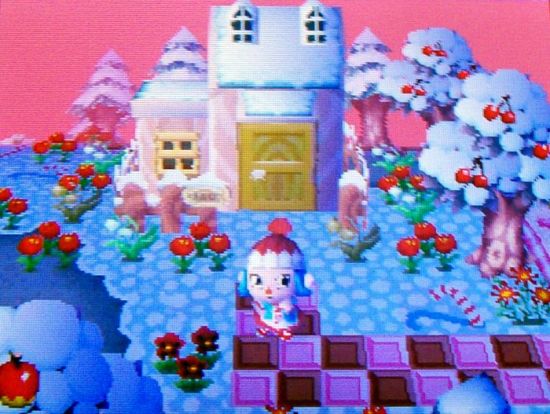 I’ve gotten down snowman building to a T: 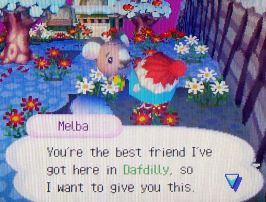 Aww, I was so happy when Melba gave me her picture. 🙂 I haven’t put much effort into obtaining villager pics in a long time, so it was a sweet surprise. I’ve decided that I’m not really going to be a completionist in this game; I don’t care if I never get Phyllis’ picture, the town hall model, all the villager pics, etc. I’ll just enjoy playing the game and forming relationships with the animals I care about. 🙂

Bright Nights began at the beginning of February!

Last year my town was very barren during Bright Nights because of dead spot testing, so it was nice to enjoy the festive atmosphere more this year. Here are my neighbors’ lit houses: 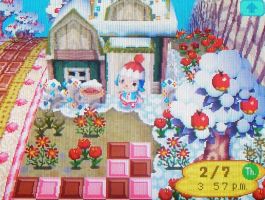 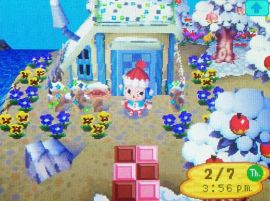 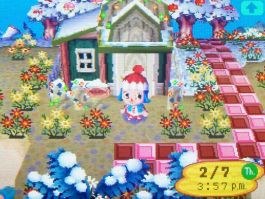 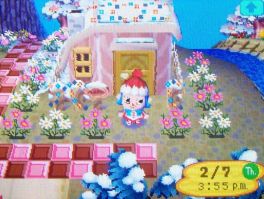 The winner (or “Bright Star”) was Whitney. *shrug* They’re all great! 😀

It was also nice to see the cedars lit again for Bright Nights. 🙂

Two more neighbors moved out: Kitt and Rolf. I cycle through neighbors very quickly because I’m eager for my favorites to move in as soon as possible. Here are their replacements:

I’ve had Jay before in my first AC:GC town Ordale, my first AC:WW town Cutetown, and my dad’s town Red Bank. Even my dad remembers him! 😛 He’s not bad for a jock in my book, but Kid Cat’s cuter.

I was shocked to see Apollo move in (today in real time, February 20th in the game) because just a week or so ago I did a neighbor transfer to try to move Apollo from my extra town Imladris to Teru’s town Bundeena. But this is a new Apollo, what a weird coincidence. xP

The leaves have turned green, a sign of spring coming soon. It adds a nice splash of new color to my town 🙂

I laid down this main path to the town hall over one of the “dead spot paths” I discovered, and I see neighbors use it all the time! 😀 I’ve observed their movements some and I think I can confirm that they use the dead spot pathways to move purposefully around town without bumping into trees, but they can also stray off the paths as well.

Waving to Puddles, who is appropriately in the pink area in town. ^_^

My town is on February 20th, and spring begins on February 25th. I’m going to have to do a lot of renovations to get my town looking more fit for spring, though; it’s very customized for the winter candy theme right now, with patterns on a snow background everywhere, mostly red and white flowers (hardly any yellow ones), and cedar trees all over the northern part of town. I’m not sure how long it will take to make new patterns and re-landscape my town for spring, but I’ll try to work hard on it whenever I can, I promise. 🙂

10 thoughts on “Speeding through the last of winter”