Last week I got to WiFi with Liam again, only this time in City Folk. 🙂 Our first WiFis together were in Wild World, and I was really looking forward to seeing what his town was like in City Folk as well!

First, though, he came over to Seahaven real quick. There’s not much to see here other than the natural environment and the cherry blossom trees. 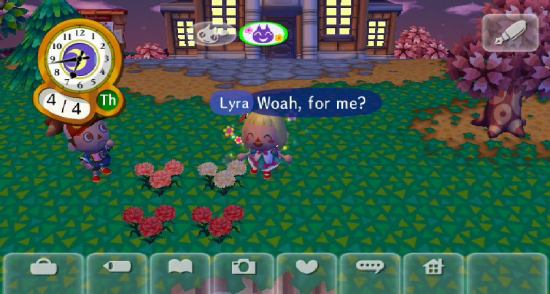 Wow, he gave me four carnations as a gift! Thanks a lot! 😀 I found out a few months ago that carnations are my birth month flower. 😛 They look nice with the colors in town during the cherry blossom festival. 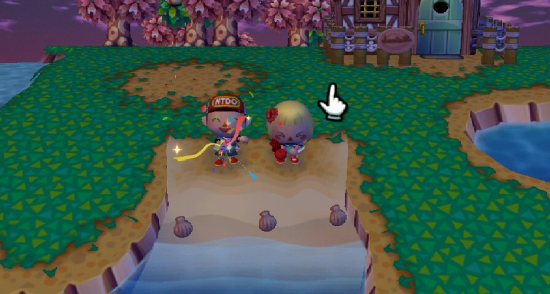 We tried to take some party popper/sparkler pictures, but each of us got the timing off a few times or set them off accidentally. 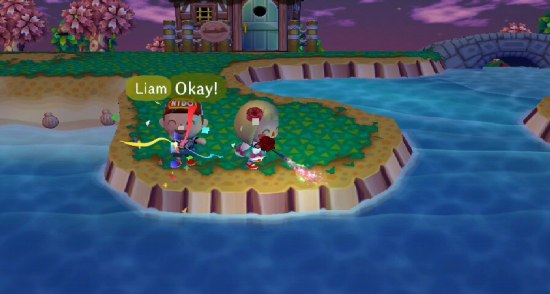 A picture together by Seahaven’s waterfall, one of my favorite spots in town, before heading over to Liam’s town Oakshaw.

Stepping through the gate and into Oakshaw 🙂 I like how the brick pattern coordinates with the colors of the gate.

Ooh, the orange and blue pansies are so vibrant next to each other!

Liam has a few areas in town that he calls “flower storage” that are beautiful fields full of hybrids 😀 : 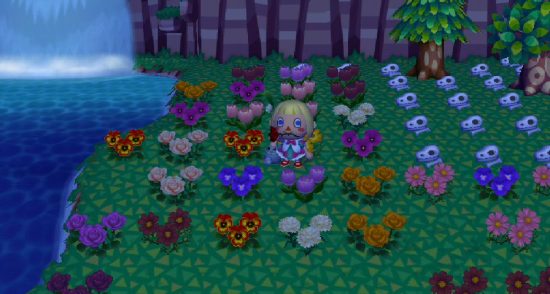 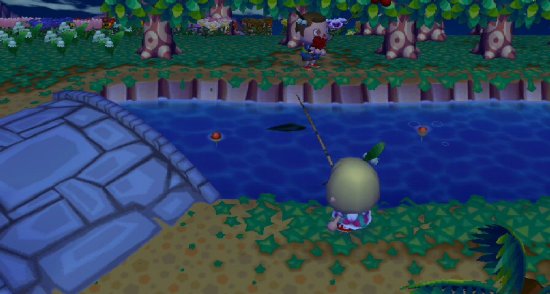 We fished along the river and ocean a bit. This fish chose Liam’s instead of mine… 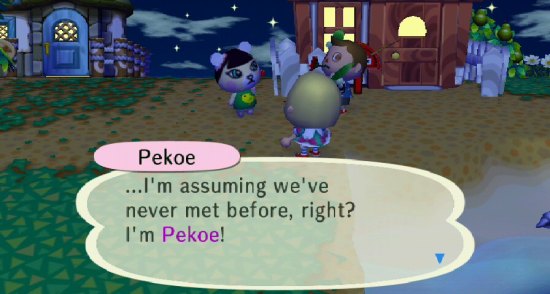 I got to meet one of the new villagers introduced in City Folk, Pekoe! 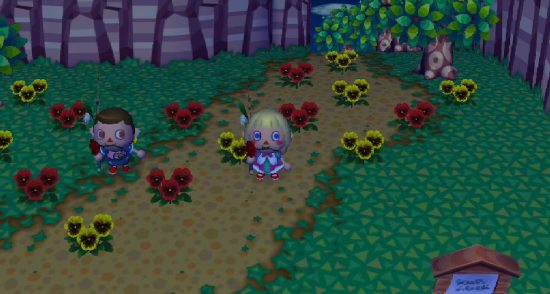 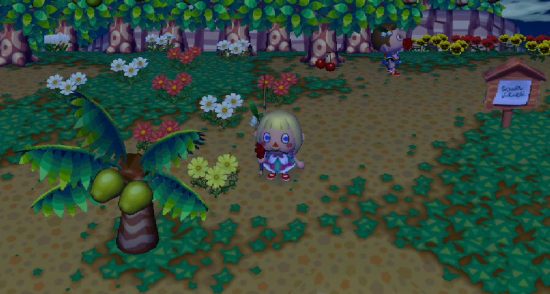 Looks like Liam will get this fish too… I’m not very good at fishing in this game. >_< I did at least catch a horse mackerel while I was there.

While my attention was away for a minute, Liam planted three pitfalls around my character. There was still a bit of room to maneuver around the pitfalls, though, so when I came back, I saw the pitfalls and walked around them, and Liam fell in instead for some reason. 😛 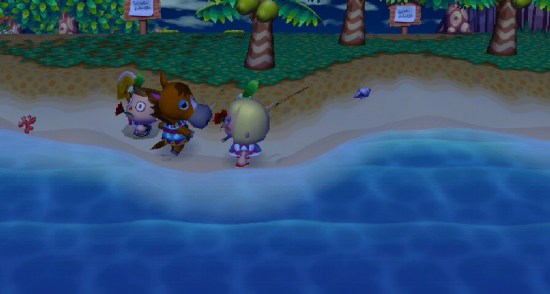 He fell in all three of them, I don’t know how that happened 😆 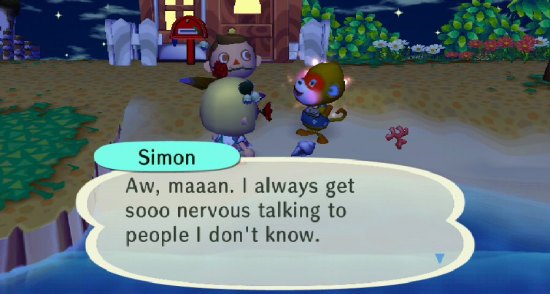 It was awesome to finally meet a monkey villager! 😀 They’re really rare to get in Wild World (especially real, non-hacked ones).

Argh! Liam got his revenge. 😛 We got separated briefly so I asked where he was, and he replied that he was at the ramp, and when I went to meet him there I fell into a pitfall. Look at that smile of satisfaction on his face!

Soaking Chow, his least favorite neighbor. I was actually kind of excited to meet Chow because he’s been featured in a few of Liam’s posts. 😆

We looked around Oakshaw’s museum, and I have to say, I like the design of the exhibits in City Folk! Seeing this huge tank on a larger screen was impressive. 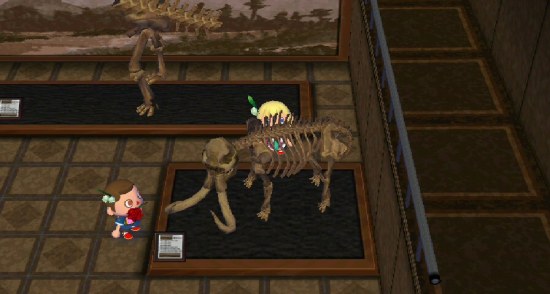 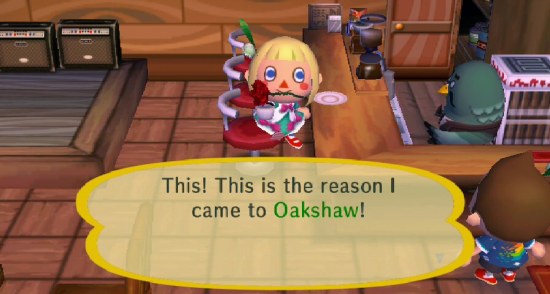 Lyra was pleased with Oakshaw’s coffee! I think this was my first cup of coffee in City Folk, haven’t gotten any in my town town yet. >_>

Chow kept turning up wherever we went. 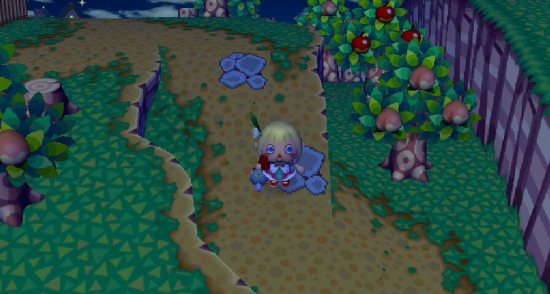 A nice worn dirt path on the ramp, with stepping stones. It’s neat that in City Folk you can take advantage of the grasswear to make dirt paths around town, and then add patterns on top that blend in with the dirt.

Liam was very giving — he didn’t just give me the carnations earlier, but also bells, a Jacob’s ladder, a red turnip seed, and all the fruits! 😯 Thanks again for everything, Liam! I felt bad that I didn’t have much to give in return, but I did have a freakoid gyroid in my pocket… 😛 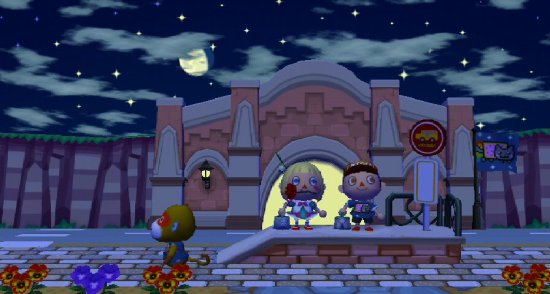 A last picture by the gate of the two of us (with Simon) before partying over. Thanks for having me over, Oakshaw is a beautiful town! 😀

9 thoughts on “Visit to Oakshaw”