Unlocking Shampoodle is always an exciting milestone in a new town, finally being able to customize your characters how you want. 🙂 I was fortunate I didn’t have to wait this long, though, by making use of a friend’s Shampoodle earlier. Other events that took place were dropping Katie off at a new town, and working on a new path to brighten things up.

Hehe, this day was actually Dafdilly’s 2-year anniversary! So here’s a fun picture I took for the occasion 😀 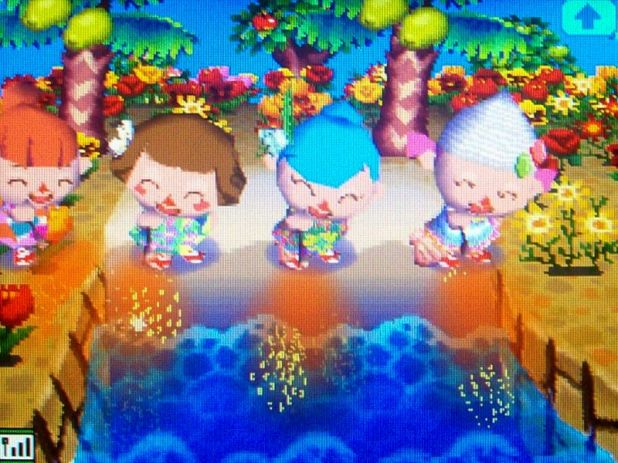 A little note on Dafdilly in general: I admit that I haven’t made much progress in catching up to the present time, and I haven’t been playing AC:WW as much since getting AC:NL. There’s just so much to work on in my AC:NL town (money-making, landscaping, path-making, etc.) that I think I would have trouble focusing on both games right now. But I still check up on Dafdilly occasionally, and it’s nice to just walk around and talk to my neighbors (like Melba! <3). I might return to playing AC:WW more frequently in the future; I still really like my town, and there's still something appealing about the simplicity of AC:WW's gameplay — for example, no stress about villager house locations, grasswear, or getting community project requests. xP

Anyway, back to my AC:NL journal for July 3rd… 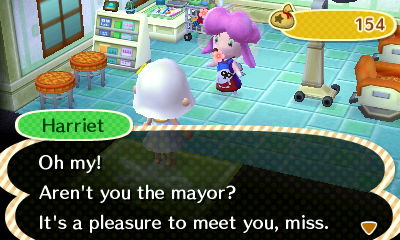 Yes, so glad to have Shampoodle now! 😀 I was surprised to hear a change in the music on Main Street as well, which I suppose is a sign things are getting livelier.

For Estel’s new haircut, I tried something completely different, a dark blue hairstyle (which is a new hair color available in New Leaf). Originally I planned on using a variety of colors for Estel’s hair, all of which are supposed to be reminiscent of either stars or the night sky: white, blonde/gold, dark blue, and black. But the dark blue color seemed strange to me after having white hair for a while, so the next day I went back to a light color again.

Oh, and the Nooklings’ shop upgraded from T&T Mart to Super T&T, the Nookway-esque supermarket. 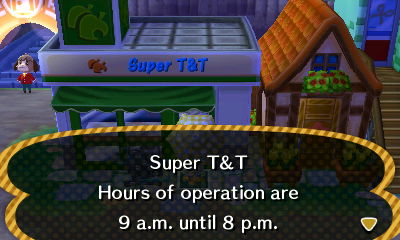 I’ve heard about this from other blogs, but this is the first time it’s happened for me! One of my town’s permanent rocks shot out gems instead of money bags! 😀 Wish I moved the flowers in the way first. >_<

While running errands outside I ran into Citàlune’s newest resident, Opal. 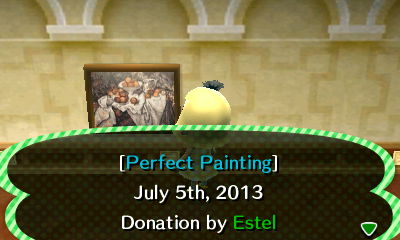 A new painting in the museum, which I bought from Crazy Redd the day before. It’s the still-life “Apples and Oranges” by Paul Cézanne 🙂

Finally, a new community request! How fitting that lazy Elmer would request a hammock! 😛 It’s not a bad project, but also not one I really, really want.

Isn’t it usually the other way around? But yay, glad to see you, Gulliver! 😀

I won’t “spoil” the answer in case you want to figure it out yourself if he asks the same thing (it’s a famous statue and easy to find out through googling, anyway). Statues are my favorite Gulliver gifts, so I was happy to receive this. Hope I can get the mermaid statue soon!

(By the way, I have so many flowers on my beach right now because I’m using it as storage while I work on flower re-arranging on the main part of town.)

Carmen asked me to catch an ocean sunfish, and I was somewhat proud of myself for actually going through with it! 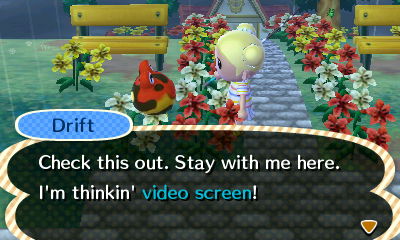 I wasn’t too hopeful or excited When Drift came up to me with a request; I doubt there are many community projects a jock would request that I would want. 😛 And indeed, I don’t want a video screen — doesn’t fit the feel I want for my town at all. I’ve seen it utilized pretty well in a dream town, though! (If you want to see what these projects look like, and don’t mind being spoiled about them, check out this page.)

Hehe, I like this new emotion, a sheepish chuckle. Isabelle does it a lot.

Thanks to CK for the rococo series and Cyrus for the refurbishing, I have this pretty room upstairs in Estel’s house! 🙂

On Sunday I found Katie in my town again, wanting to be taken to a different town.

Choco was online, so I took Katie to her town Belltune.

While I was there, I thought I’d look around. 🙂 There are new path designs and lots of new projects in Belltune, like this signpost pointing the way to… 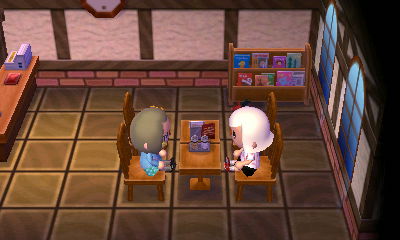 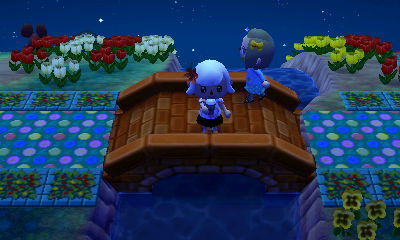 Taking my first sip of coffee on another brick bridge 🙂 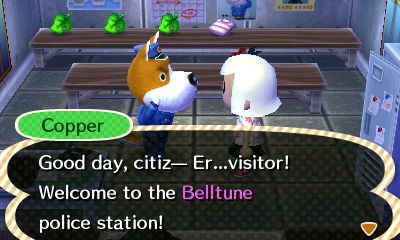 There’s also a new police station in Belltune, and it’s the most familiar version to me since it’s based off the one in AC:GC. It was nice to visit since I don’t think I’m going to build a police station in Citàlune.

And you can sit under Belltune’s tree, awesome!

…But WiFi crashed in the middle of reading the scrolling history of Belltune. 😦 Then I found Katie in my town once more, which meant that taking her to Belltune wasn’t saved since WiFi crashed. I’m sorry about that, Choco! I didn’t see Belltune open again, but I saw that Teru’s town Arcadia was, so I decided to try taking Katie there next:

Teru’s character Rain was at the station to greet me, looking a little worse for wear. 😛

This is actually a new town of Teru’s, on a different gamecard. Though she did like her first town for Arcadia, there were a few things that bugged her about it, so she started a new town on a different gamecard instead of erasing the work she’d already put into her first town. I have to say, after looking around this new town, I think it’s definitely a keeper! I like all the little aesthetic details (fruit, grass, train station and town hall designs, waterfall), the layout in general, and how all the villager houses are in a row at the bottom of town, it’s really neat!

And I love the neighbors themselves, too! There are a few that were in her old AC:WW town(s), like Lily and Kody, along with cool neighbors new to New Leaf, like the deer Deirdre and the unicorn Julian:

Their houses’ décor is so creative and seems to fit them well!

I was amused to see that this fund for a lamp post was just one bell away from completion, and tempted to pay the last bell to see what would happen 😛

But I didn’t want to deprive Teru of the opportunity 😀

A pretty spot in Arcadia, with a nice view of the waterfall and of the violets across the river.

There are lots of flowers along the river to help prevent grasswear while fishing. I might have to start doing this, too, I’ve noticed a lot of grasswear along my river… 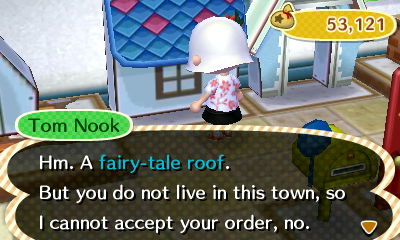 Before I left, I arranged for this fairy-tale roof from Arcadia’s Nook’s Homes to be ordered to my town’s Nook’s Homes, since I want my character Lyra’s house to have the fairy-tale house parts. Thanks for having me over, Teru! 😀

Back in my town… 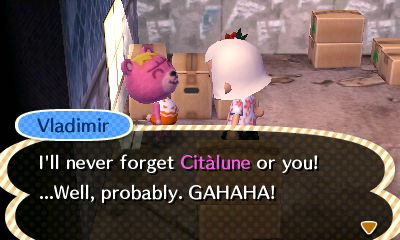 This time I remembered to say goodbye to Vladimir before he moved out.

Estel’s house is getting closer to the elegant white mansion look I want, but I really want a more fitting fence. >_<

Nothing of note. The pictures I have from yesterday are just messing around doing emotions with Blathers. 😛 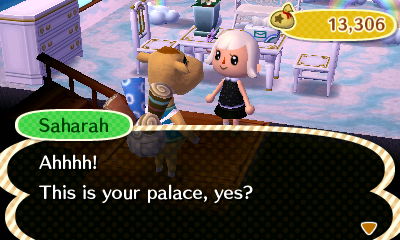 Today Saharah was in town for the first time since day 1! Now I have a palace instead of a tent 😛 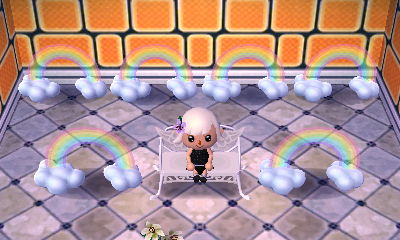 She gave me a stone tile and an astro wall. Neither are Saharah exclusives, I think. I like the stone tile, though, it might look nice in a bathroom. 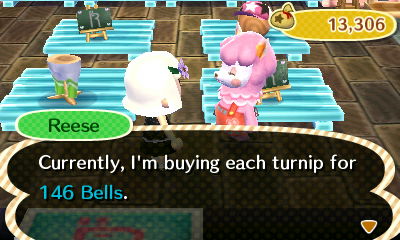 I regret not buying turnips this week… I thought that 110 bells was a high price to buy them, but it turns out I could’ve made a profit. >_<

The path I want to make for Citàlune is a mosaic-style path with a pattern of moons, suns, and stars (formed with mosaic tiles/stones). I think that would be fitting for my town’s name and for the old-city feel I want to have eventually. Though I’m not sure how to even go about making a complicated path like that, so I guess for practice I’m trying to make a simpler mosaic path. This doesn’t have any recognizable picture on it (like a moon or sun), it’s just a random circular pattern…

I hope I’ll be able to put together that path I dream of for Citàlune eventually! It might be a while, and I might run into limitations (ie. not having enough pattern slots for all the corner pieces required to make a neat path, not having enough pixels or space on the grids for the sort of moon/sun mosaic design I want, etc.)