This is quite an eventful post! So many things to cover: a busy day of WiFi sessions when Citàlune had a high turnip selling-price, an exciting new neighbor moving into town, gardening and public works progress around town, and lots of internal debate over the Café’s location. I’m going to ask you all for opinions about that at the end of this post, but first I have to tell more about my town’s happenings lately!

This was such a WiFi-filled day — probably more WiFi than I’ve ever done in a single day before! It began when Ryann from Shantaki wanted to come over and see Citàlune, since I’d been to her town before but she hadn’t been to mine yet. I also thought it would be a good idea to leave my gates open for others since I had an extremely high turnip price that day: 580 bells! Various people came and left Citàlune, and invited me (and others) over to their towns as well. I believe these are all the people I WiFied with this day (hope I didn’t forget anyone):

I think any attempt to try to do a full write-up of this WiFi would be overwhelming and confusing, but I’ll share some pictures:

After opening my gates for Ryann and others who might want to sell turnips, my town quickly became full! A group picture with (from left to right) me, Will, Kiki, and Ryann. 🙂

I hadn’t bought turnips the Sunday before and was resigned to not being able to take advantage of my town’s great turnip price, but CK came to the rescue by setting her town’s date to Sunday and letting people come over to buy turnips!

So I got to explore CK’s beautiful town of Bluebell again while searching for Joan, and then I bought as many turnips I could carry.

Being able to sell turnips after all really brightened my day, thanks a lot CK! 😀 I was pretty bummed when I thought that I wouldn’t be able to, not really because of money reasons (it’s easy to make bells on the island, after all), but just because it’s the first time I’ve seen any of my towns have a big turnip price like this. I’ll be sure to buy turnips from Joan in my own town from now on. xP

I opened my gates again so that others could continue to come sell turnips, and Ryann and Will came back over, along with Liam (he’s the one wearing headphones).

Ryann had an idea for a fun villager guessing game in which she would give hints about a certain villager (clothing, appearance, etc.) and we would guess who it was, winning a prize if we guessed correctly.

I did pretty well at the game, winning myself a Triforce, stained glass, and female mask. 😀 Thanks a lot for the prizes and for running the game, Ryann, it was a nice surprise and a lot of fun! 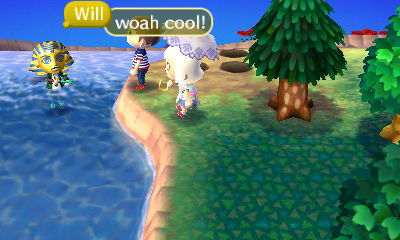 Will and I watching in awe as Liam swims in the river! I didn’t know about this glitch, but it’s cool since you can’t swim in the river otherwise. 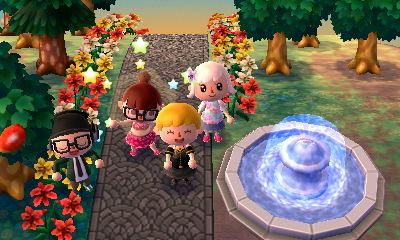 Now in Ryann’s town Shantaki with her sister, Cassidy, and Liam. ^_^

I love this house in Shantaki, such a cute cottage feel!

Visiting Shantaki’s coffee shop, which is in a gorgeous riverside location: 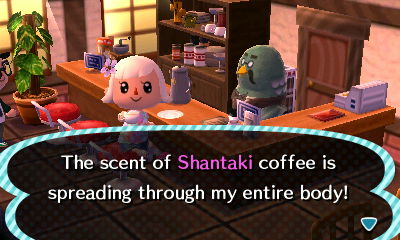 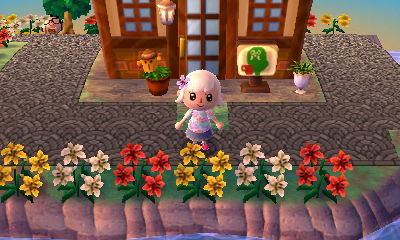 We tried to visit the island, but WiFi crashed on the boat ride, and it crashed yet again the next time we tried. >_< It's a shame how common WiFi crashes are… 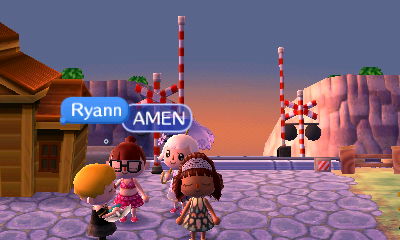 Having a group prayer together seemed to do the trick! Then we were finally able to go to the island successfully and tour. 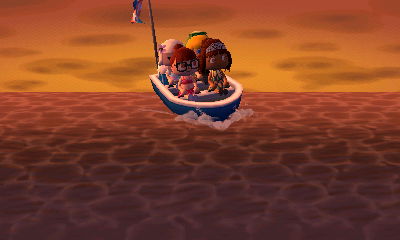 The final WiFi of the evening was with Cassidy and Ryann in Citàlune: 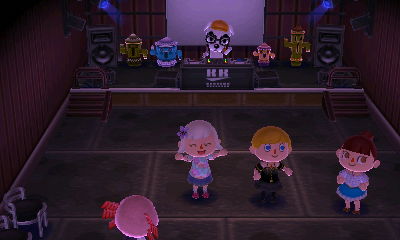 I don’t have many pictures of this last WiFi, but we went to Club lol and chatted, they sold turnips and looked around Citàlune, and I asked for their advice about my café’s location. 🙂

Thanks a lot to everyone for the fun WiFis! 😀 It felt weird to be having so many people over because my town was seriously under construction (I was in the middle of working on paths and flower-rearranging), but everyone was nice and understanding about it.

Since I deposited my money from selling turnips the day before, I guess that put me over the threshold for another gift from the bank, a neat stationery set. It adds a realistic, lived-in touch to a room. ^_^

Now I’ve received one mannequin each from Mabel, Sable, and Labelle. I assume I’m not going to keep getting new mannequins forever, so maybe this is the last one? And is it just me, or is Labelle getting friendlier? I thought that only happened with Sable!

Well, I have a lot of favorites based on appearance, like Bob (a perfect lazy cat!) and Stitches (who looks like a colorful teddy bear). But I love Melba because of everything: her personality, appearance, tastes (like music and interior decorating), and history. She was in my first AC:WW town, which was pretty much the only thing I regretted about deleting that town. xP Then later on she showed up in my second major AC:WW town Dafdilly, and she’s still there. I’m glad I’ll get to see her in my AC:NL town too! 😀

I’ve noticed they’ve made some changes to Melba. She’s taller now (though I expected that), wears a striped tank instead of the green vest, and the interior of her house has changed:

I liked Melba’s house better how it was before; it reminded me of a cozy candy cottage in the woods of a fairytale, and it heavily inspired how I decorated my main room in AC:WW. Now it’s a little plain, but oh well. 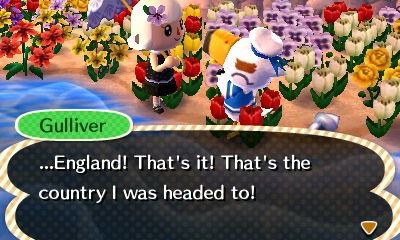 I helped Gulliver figure out where he was headed, and in return he mailed me a model of Big Ben. 🙂

Sylvia’s leaving, and I’m letting her go. Nothing personal, but like pretty much every single one of my original neighbors, her house is in a bad location.

Another community project requested that’s too modern for the feel I want for my town. 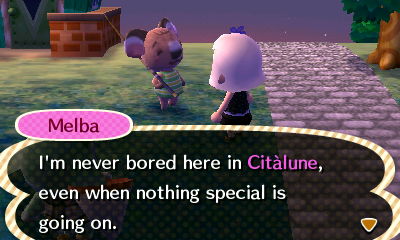 Glad we could be welcoming to you, Melba 🙂

I remembered to see K.K.’s show this past Saturday!

I forgot the week before, so this was my first time. He doesn’t accept requests for the first performance, so I especially look forward to next time (if I remember to go >_<). 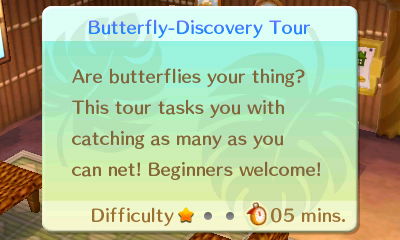 I lined the paths on the “city” side of town with lilies, which looks bright and sunny, and I have violets lining the paths on the “natural” side of town (the side with the town tree), which has more cool colors. I’m also hoarding lots of lilies and violets on my town’s beaches, for when I work on more flower re-arranging around town.

While working on planting flowers, I noticed some path-like grasswear here (usually covered by patterns). I don’t have this sort of grasswear elsewhere in town yet, so I assume this spot must’ve had a lot of dirt since the beginning.

I’ve changed the area in front of Estel’s house a lot recently: from the trees and flowers to the community projects I use to repel villager houses — fountains now, instead of benches. This style of fountain reminds me of one you might put in front of an official-looking building, like a bank, not one that would be found in someone’s garden, so I don’t plan to have these fountains here forever. I hope the statue fountain is requested, I think those would be more fitting here.

Wooooo! It’s a lot easier to water the flowers lining my paths with this! 😀 (I don’t have to water flowers since I have the beautiful town ordinance, but I often do it to encourage hybrid growth.)

There was a rainbow in town — not the best time for one since my town’s messy and under construction (I know I say that a lot, but it’s true 😛 ) — but it was still nice to see!

This was a pleasant surprise! Didn’t think I’d done that many favors for my neighbors. 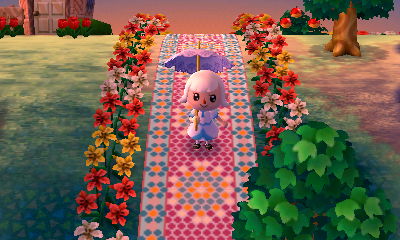 I like the way the sunset affects the colors of this path!

Sometimes I like to play really early in the morning, as soon as I wake up. I did this yesterday and Melba was the only one outside, so we spent some quality alone time together. 🙂 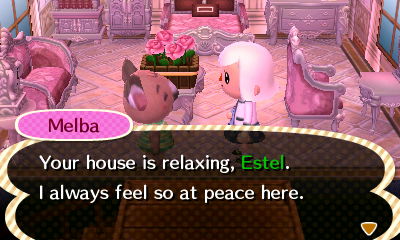 She came over to my house and seemed to find it very relaxing. 😛

And she requested a community project that I actually want! 😀 Maybe this can be my strategy in the future, running around town when only certain animals are outside. (Probably won’t bother though 😛 )

Later in the day another rainbow appeared, so I took screenshots with my two newest projects, a hammock and picnic blanket:

I’m sure I’ll end up demolishing these eventually, but I’m trying to work towards perfect town status.

I got my first contacts from Shampoodle yesterday, a light blue-gray color:

The fruit trees I planted around the picnic area are fully grown now, making this area much more colorful. 🙂

I helped out Gulliver again; he does seem more common in this game, which I like! His destination this time had less obvious clues than the other ones so far. 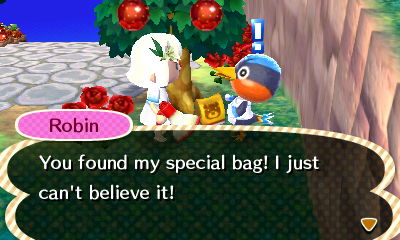 Wow, I went to great lengths to find the owner of this lost item! >_< I hunted down every single resident (looking all over town and Main Street and through all the exhibits in the museum) until Robin was the only one I hadn't found, so I knew it must be hers. I was using the megaphone and she kept responding with stuff like, "I hear a voice!" and "Who is it?" but it still took me forever to find her. xP

Not sure which I like better. Anyway, I don’t necessarily want to pigeonhole a certain look for Estel (like I did with Twisk in AC:WW), so I’ll keep my options open.

This hedge I bought for Estel will be a lot more fitting for her regal house exterior than the current picket fence, I look forward to seeing it! ^_^

I went to my dad’s town today to sell turnips — not a huge price, but enough to make a profit. 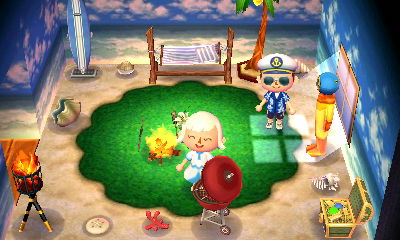 I thought this tropical-themed room of my dad’s was pretty impressive for only a month or so of playing, and July’s DLC (the palm tree lamp) is perfect for it! 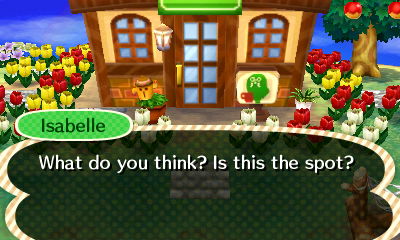 And finally, as the title suggests, I’ve been spending a lot of time debating about where to put the café. I think there are two good potential locations: one in a nook of the river (which is what’s shown in the preview above), and one at the end of a row of buildings formed by Re-Tail, the train station, the town hall, and Lyra’s house (so it would almost be like a second main street).

Here are two maps showing exactly what I’m talking about in case you want to see and provide input! 🙂 The position of Lyra’s house changes depending on where I decide to put the café. 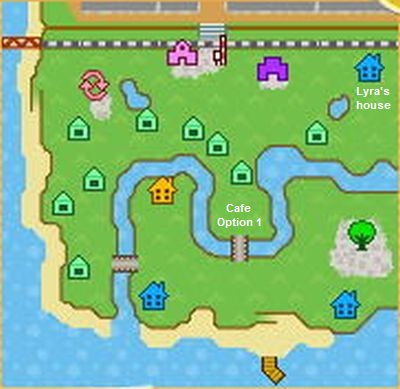