Prepare for a long post! 🙂 The end of November brought the Harvest Festival and Fishing Tourney, a WiFi with a new friend, the end of a castle’s home loan, lots of redecorating and gardening, the scenery of late Fall, and Citàlune’s first snow.

November 16th was the second fishing tourney, and this time I didn’t win first place for a change! I was impressed by my neighbors’ performance; they aren’t usually this competitive! I wasn’t extremely motivated for this tourney, and I only got a few exclusives. I’ll have to put forth more effort in the future! >_> 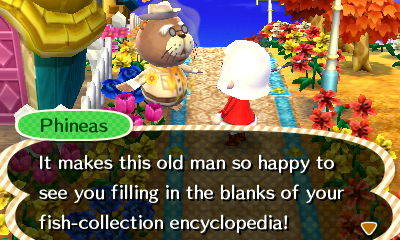 The fishing tourney had the added benefit of forcing me to go fishing and catch some new types, earning me a new badge! I’m not good about fishing and bug-catching often these days…

Ahh, this made me really happy to get to sit with Melba in her house! ❤ 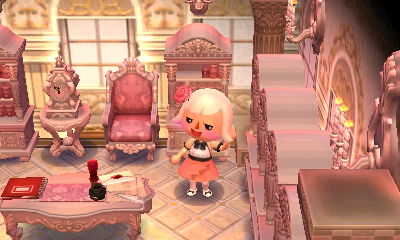 Just thought this was a cute outfit.

Violet and Lyra have complete emotions now, and Lyra got us another golden axe! 😀 They’ve also both unlocked refurbishing capabilities and the QR machine. I’m proud of the progress they’ve made. ^_^ 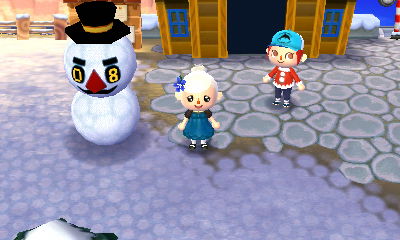 I WiFied for the first time with someone I’ve been in contact with for a while, Lilli (Virtus from Sidus in-game)! 🙂 She started an AC blog, so feel free to check it out!

Ahh cool, she has Carmen! 🙂 Not my Carmen, though, of course. 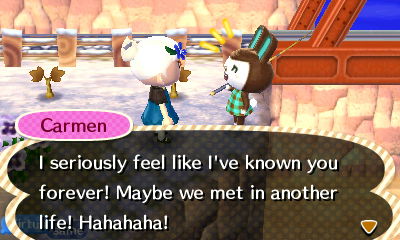 After looking around her town and catching some mole crickets, we went to my town:

Haha 😆 It’s too bad the sky was so cloudy, and the lighting so dull!

She really wanted to meet Biskit, so we went on a hunt for him and found him in the Emporium browsing the music albums. It’s always kinda sweet for me to see someone who really loves a villager that isn’t uber-popular. ^^ All the villagers deserve some love and fans!

We also browsed my museum a bit. It grew a lot over the summer but its progress has probably stalled some since then, ah well. Thank you for the WiFi, Lilli! 🙂 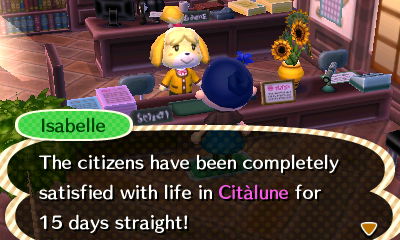 Hehe, finally! I feel like everyone else probably accomplished this a long time ago 😛 But it took me a while since I have a bad habit of dropping stuff on the ground. (I hoard lots of bushes and saplings for future landscaping projects, so my storage space is constantly an issue!) 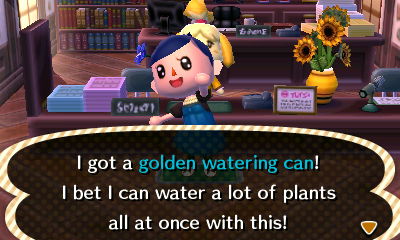 I went from having a single golden watering can, an extremely kind gift months ago from Teru, to now having 5! 😯 (Was able to get one with each of my characters!)

Ahh, this was a pretty sight to behold as I walked out my door one day! ❤ The holly bushes have started to bloom, and for now they have white berries, matching the flowers I have around Estel's castle. 🙂 (I know that it won't last long, though. They'll turn red later.)

I was inspired by the white holly berries to make a marble tile pattern real quick to cover up the dirt paths in Estel’s gardens, and also to change my outfit 😛 :

At first I arranged the tiles in a spaced fashion in an attempt to make them look like stepping stones, but then I tried filling in the spaces and decided I liked that better, I think: 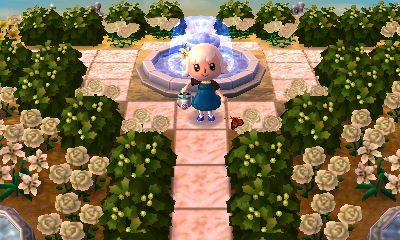 Which do you prefer: spaced-apart or filled-in tiles? ❓ 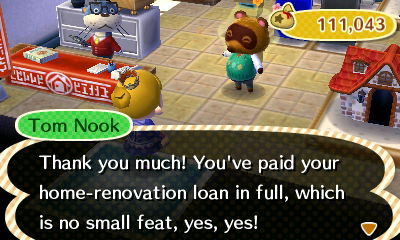 That means a lot, coming from you! 😉

And the next morning: 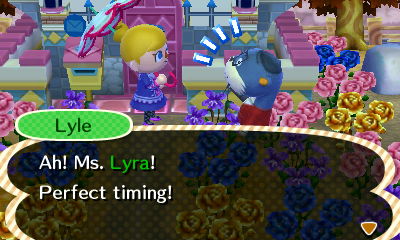 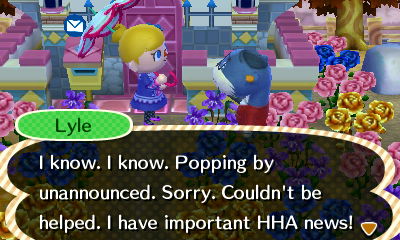 Haha, having Lyle at the doorstep felt like old times in Wild World, when he’d hang around your house on Saturday mornings. But he’s not here for insurance sales, he’s here to give me information about the HHA Theme Challenge, which is available to those who expand their houses completely and pay off all their debt. The challenge involves both evalulations on the exterior house and on how well the entire house (all the rooms and the exterior together) matches a certain theme of your choice.

I went with the Fairy Tale theme challenge, of course!

A few days later there was another pretty sight to behold, Citàlune’s first snowfall! 😀

I talked to some of my neighbors, but they didn’t seem as excited. 😛

Sitting under the tree in the snow, which has now lost all its leaves.

I wish I could’ve played in the snow longer, but felt I should continue moving on with my TT-catch-up process…

The Harvest Festival is here! 😀 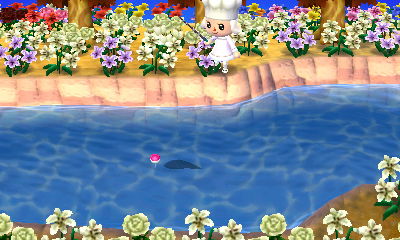 Somehow the job fell to Estel to collect ingredients for the whole town’s dishes, so she was forced to get her hands dirty and get fishing, and suffer some bee stings. (Honey from a beehive was one of the ingredients 😛 )

But we got all the dishes done in the end! 🙂 From left to right, they are: a mixed salad, fruit soup, sautéed sea bass, and cherry pie.

Overall it was a cute, fun event — especially at first! But it got a little frustrating towards the end to get the last few ingredients, and because my neighbors kept requesting barbel steeds (they seemed hard to find for me). 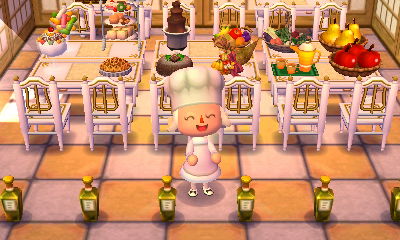 And I’m very glad to have some more food items for Estel’s dining hall: a fruit basket and a cornucopia! 😀 I also made sure to collect some of the ingredients like milk, butter, sugar, and especially lots of vinegar. No, I’m not going to leave the vinegar on the floor of Estel’s dining hall like this. xP I have plans to use it for Fern’s house in the future! I want her house to have an old inn/tavern feel to it (Fern’s Tavern? 😛 ), and I think having some of these bottles scattered on cabin tables or something will help add to the feel I want.

I put some milk, butter, and sugar together with pumpkin pie on Violet’s kitchen table — ahh, sounds yummy!

You probably noticed I’ve changed her main room around a bit:

I changed it to something a little more cozy and cottage-like. But I’ll probably continue messing around changing her house for a while to come, so this isn’t necessarily permanent. 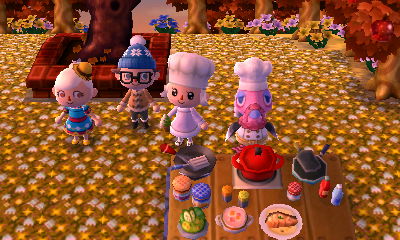 Megan and Liam came over for a little while during the Harvest Festival as well! I really enjoyed having you both over, and thanks so much for the wonderful gifts!! ❤ 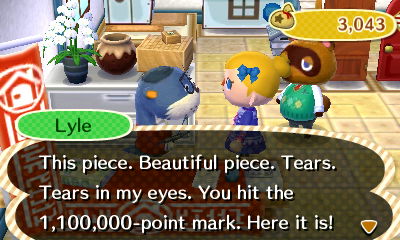 Wow, I completed the HHA Challenge in like one day, and earned all the golden HHA parts available! xD

But the golden roof is the only one I’m interested in, so I just put an order in for that.

Lyra also got a gold badge from Phineas, and a golden house model and gold trophy in the mail, for her efforts in impressing the HHA.

I’m really happy with how the gold roof turned out! It’s not yellow anymore, but legit gold!

I decided to immediately get rid of the boring rooms I had set up for the HHA Theme Challenge and get to work on some new rooms! 😀

Since Estel’s castle has side rooms that focus on living/health essentials (dining hall: eating, bath-house: bathing), I thought I’d make many of the rooms in Lyra’s castle focus instead on luxuries, arts, and entertainment. I’m pretty satisfied with how it’s turned out so far! Much happier with the new rooms than the HHA-approved ones, at least. >_>

What it is: An entrance hall, with a few attempts to reference the sun imagery I’d like to associate with Lyra’s castle. (The palace tile has a sun-like symbol on it, and the golden clock reminds me of the sun as well.)
Future changes: If possible, in the future I’d like to replace the sapphire furniture with pieces from the golden series instead (golden tables and a golden bench).

What it is: A throne room, with many stained glass windows, stained glass lamps, and jewel furniture.
Future changes: Might one day want to replace the gold and silver modern chairs with actual thrones. Also might continue contemplating the wallpaper/flooring, but I think the mosaic wall & tile is the best option there is, to be honest.

What it is: A music hall with mostly classical instruments (didn’t want to put stuff like metal guitars in here).
Future changes: maybe none?

What it is: A performance hall for theater, dance, etc. For this stage set-up, I had A Midsummer’s Night Dream in mind, haha.
Future changes: Well, in the future I might just completely scratch this room, since it’s probably too hard to get the feel of a believable theater… 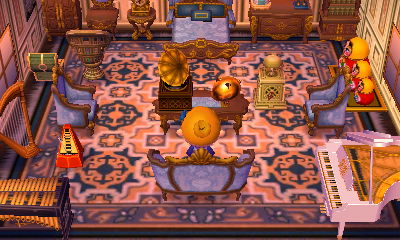 What it is: Lyra’s bedroom, which is appropriately filled with gold and luxurious items.
Future changes: Might add some odd knick-knacks here and there as I collect them, I dunno.

What it is: A library
Future changes: A pretty huge change I want to make is that I plan on replacing the carpet and the furniture with gorgeous-series items. And I guess those should be available at my town’s GracieGrace pretty soon! 🙂

In addition to the changes I made to Lyra’s rooms, I also made a change to one of Estel’s rooms, the basement. Before it was a white rococo library, but since Lyra’s castle has a library now, having two seems a little redundant. Now it’s a chapel:

I felt a little unoriginal doing this since I’ve seen quite a few people with chapel-style rooms, but obviously it’s a very beautiful sort of room to have, so it appeals to many people. 🙂 And I think that my furniture, carpet, and wallpaper choices were still my own and not based off others’.

I’ve worked on improving the entrance and flower arrangements in front of Lyra’s castle (to better match the sun theme), but can’t finish it until Biskit’s house is gone. 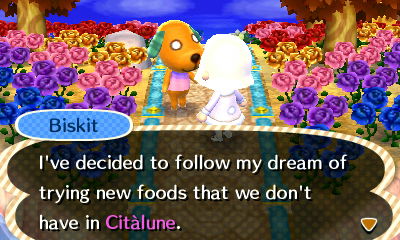 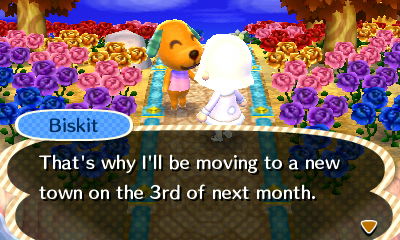 Well, feel free to follow your dreams Biskit! No hard feelings, but your house is in a bad spot. 😛

45 thoughts on “End of November”