This past Thursday was the Harvest Festival in AC:GC and AC:CF, and since I haven’t found the right town for AC:CF yet, I made sure to take a little time to partake in the festivities in Ordale.

But I hadn’t played for several days, so first I ran around town pulling weeds, and all of a sudden Franklin cried out when I was running by a tree — I didn’t even see him! Way to blow your cover, Franklin. -_-

Franklin felt he would be safer with no silverware around, so he asked me to steal the knives and forks from the feast. I wanted to finish pulling weeds, though, and look what I found… 😀 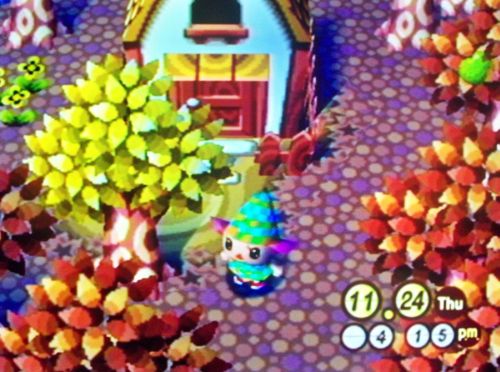 My first golden tree ^_^ Planted with a shovel in my last post. It’s so pretty! I had an AC:WW town named Goldleaf once, but I think the name would be so appropriate for an AC:GC town with lots of these trees.

And a golden shovel tumbled out of its branches! I didn’t know about this playing when I was younger, just found out recently on the internet. 😳 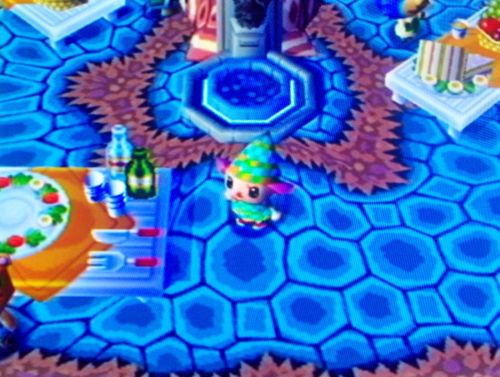 As I got closer to the Wishing Well acre, this music began to play faintly and grew louder and louder until I was at the feast’s tables with the rest of my neighbors, who were laughing, drinking, and having a good time.

Tortimer was also there and gave me one of his many special events gifts.

And here’s a pointless video of me stealing the silverware, lol:

I didn’t mean to stop recording when I did, but pressing the recording button of my handheld camera with one hand and trying to press various Gamecube controller buttons at the same time is not the best video-making technique. 😛

My neighbors kept giving me hints about which row or column of acres Franklin was in as if they wanted me to do the dirty work, unaware that I was secretly helping him out. 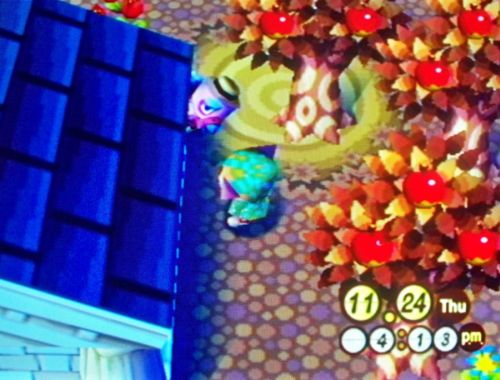 And again. 😆 Maybe refraining from poking your head out every two seconds would make your hiding places more secure, Franklin. 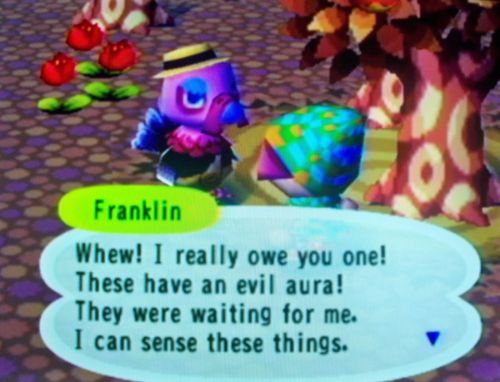 He was thankful everytime I brought him the silverware and gave me a piece of the Harvest series in return each time.

But I didn’t do this too much because it looks like I already have all or most of the Harvest series in my main room (which was like this when I first started playing again after many years):

You can also see the fishing trophy that I got from Tortimer in my last Ordale post. Wonder what that medal’s for…

Tortimer gave me a cornucopia, which I already had in this room, so now I have two. 😛

The next day was Sale Day, which I expected to be like the sales in AC:WW, so I was surprised to see all these red bags!

Upstairs looked as usual, but I did buy the papa bear. 😛 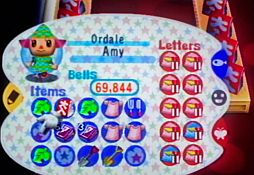 When I opened the grab bag, I was surprised to see three items pop out in my inventory!

I opened a few more and got two pinwheels, this yellow one and a red-and-white striped one. 😀 They’re really cute, they spin faster as you walk. I bought all the grab bags, but I’ll save some of the fun of opening them for another time. 🙂