This is another AC:CF WiFi post, but a brief one since the WiFi session was also rather brief, just 15-20 minutes or so. It was still fun, though! I went to Will’s town of Oakwood for the first time this past Sunday. 🙂

Stepping through the gate, I was immediately surprised because the last time I’d seen his town, it looked like this. He’s done lots of renovations in Oakwood for the spring/summer, it looks fantastic! 😀 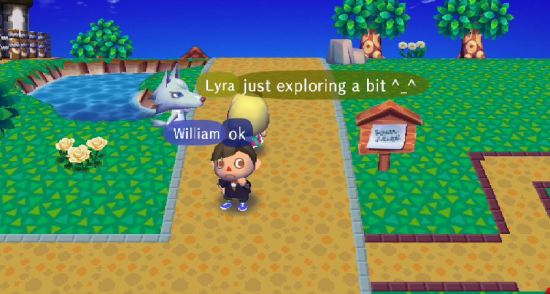 It’s nice to see a familiar face, I have Whitney in my AC:WW town Dafdilly. 🙂

Bob, one of my all-time favorites! 😀 He read me a poem, like Egbert in Ol’ Dale did. 😛 He’s one of the lazies I want to have in Dafdilly, I hope he turns up there someday. It seems like Will has been pretty lucky with neighbors in AC:CF!

This is a cozy set-up, with a nice view of the Jingle TV from this bed, and a lamp nearby to use for reading at night.

I was impressed by the even spread of palm trees by the beach! I wonder how dead spots work in this game, if there are any. But you can be sure I won’t do that testing in AC:CF. 😆

His Nook ‘n’ Go’s stock is a lot better than mine tends to be — I think that ranch hutch is a spotlight item! I didn’t buy any furniture in case he wanted to, but I did buy an axe, which will be helpful if I ever want to attempt to landscape a bit (probably nothing too great, though).

Shortly after he had to go. I was saying “thank you” because he had just given me some bells! Thanks again, Will, it’ll go towards my first house payment. 😀 I enjoyed exploring Oakwood a bit and seeing all the new paths and landscaping! If you want to see more, check out Will’s post.

Now I’ve gotten to WiFi individually with a few of my AC blogging buddies who play AC:CF, and I think it would also be fun to have some sort of group meeting sometime. Though New Leaf is coming out very soon as well, so we could also just save group WiFis for that game. It’s starting to feel so close!

One thought on “Brief Trip to Oakwood”