Having not been to Ordale since Halloween, I decided to check up on the town again recently. In my visit, I got to see snow in Ordale for the first time in years, or ever — I can’t remember if I played this game much in Winter as a kid. I also participated in a Fishing Tourney! 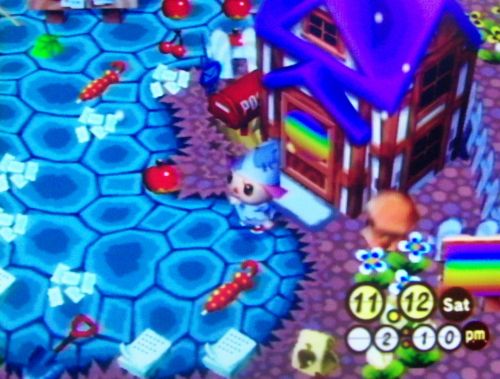 When I stepped outside last Saturday, still in rags 😛 , the first thing I saw outside (other than the junk on the ground and the ridiculousness that is my house) was snow falling! ❄ Though you can’t really see it good in this picture; there’s just a few flakes on my roof.

This weather report notice is labelled the same date, so maybe it’s Ordale’s first snowfall this season. I’m glad I didn’t miss it! 🙂 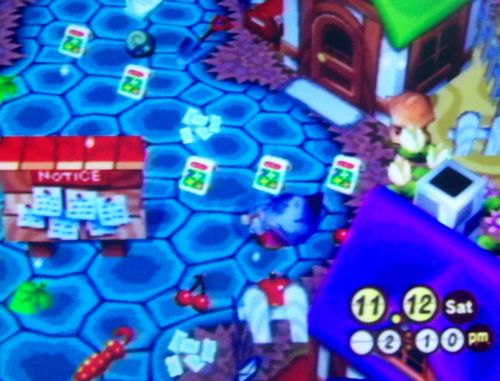 I finally started to pick up all this junk on the ground!

I also finally answered my blinking mailbox to go through mail from who knows what or when. 😛 It was full of birthday letters, and there were a few from the same villagers, maybe from multiple years? Interesting how the game prioritizes birthday mail above everything else!

I was somewhat reluctant to change my roof color and remove the rainbow pattern on the sign and door because they’re reflections of my tastes when I originally played this game many years ago. But if I’m going to continue playing in this town, I should have it reflect more of my current tastes, so I changed my roof color to classic red and removed the rainbow pattern from my house. Later on I’ll change the interior, too, based on what I have available in my catalog. 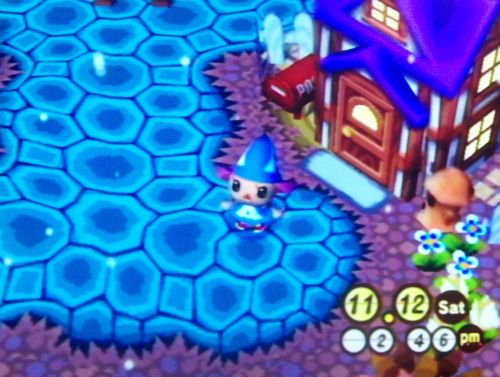 Yay, clean pavement! Though it’s already getting messy again. 😛 I want to make my first Animal Crossing town really beautiful, so I’ve been buying flower and sapling bags, but until I make a gridded map and a plan for where flowers and trees will go, they’ll just litter the ground. 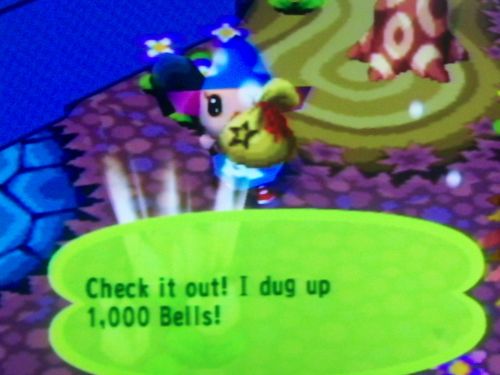 Woo, found a shiny spot! 😀 I re-buried the money I dug up to see if anything cool would happen, but I don’t even think it had a chance to become a money tree because I didn’t use a golden shovel. xD It just became a regular tree…

In my first post on Ordale I showed you my main room and upstairs room, but not the basement because I couldn’t figure out how to turn the lights on. I think a notice pops up that you can turn the lights on with the Z button, so I should’ve payed closer attention. 😛 Well, here it is: a strange mix of storage, outdoor furniture, and a bathroom. 😆

Me too, Rasher 😆 Nice to meet you~

I think I’ll pass on that. xP In fact, I went in for the day after this, brrr.

The next day I saw a character who looked like me on the title screen (which made me miss green grass >_<), appropriately carrying a fishing rod because…

It was the Fishing Tourney! Well, it’s not that special, I think there’s one every Sunday this month. 😛

I was eager to participate, but first decided to meet another new neighbor:

I guess my town’s working its way back up to the maximum number of residents you can have in this game, 15. Spork just moved into my AC:CF town, too 😛

Wow, after playing AC:WW so long, it was strange to see Tortimer wandering around. He gave me a trophy, but I forgot to see what it looks like. >_< And I wonder how it compares to what you get if you win the tournament?

The first thing I manage to catch is this old boot. -_-

Fishing is a lot harder in this game than I remember. I swear, I press the A button as soon as I see the ball go under water, but it’s almost never fast enough to catch any decent fish. 😦 I don’t know what happened; some of my fondest memories of this game are fishing for hours in the rain, catching tons of red snappers, barred knifejaws, and coelacanths. 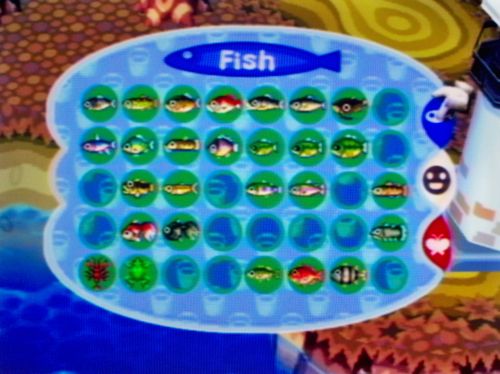 Not really an impressive collection, but you can tell that I enjoyed fishing when compared with my bug list.

Haha, I remember most of the time I didn’t bother and just ignored bugs.

After a few tries I caught my first real fish of the day. It was just a sea bass, but I thought it might be good for the tournament, so I returned to the lake, where the judge’s tent is located.

All after the same fish 😛

I went to try from a different angle and found Freckles hogging the pier! Wow, busy 😀

Meeting Chip, the judge of the Fishing Tourney.

I can see why he was fired in AC:WW, this seems rather corrupt… >_>

Aww, I thought it would be perfect, the biggest bass you can get! 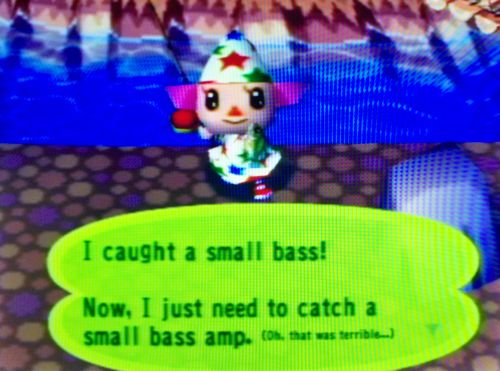 I started fishing in the river instead, and these small bass weren’t too hard to catch, but with any larger fish shadows it was still just way too hard to press A in time. 😦

I took the small bass to Chip, and he was only slightly more pleased with it than the sea bass.

Well, he was of course still happy to eat it. 😛 I wasn’t expecting much, but he could have at least told me the record I needed to beat. My tiny bass wasn’t competition enough, I guess.

Finally, my first (and only) regular bass I was able to catch! 😀

Only one inch larger than the small bass?! Oh well, I probably would have had to catch a large bass to win, and fishing has become too difficult for me in this game, so I gave up.

Another shiny spot! This time I buried a shovel, and a beautiful golden sapling sprouted up.

Sadly, the sapling died. 😦 Ah well, worth a try!

Wow! Even if I had beat Eunice, I probably would have just been beaten later by Pate.

Meeting Murphy, the grumpy green bearcub. xD His house location is my favorite, in a little nook in the cliff. 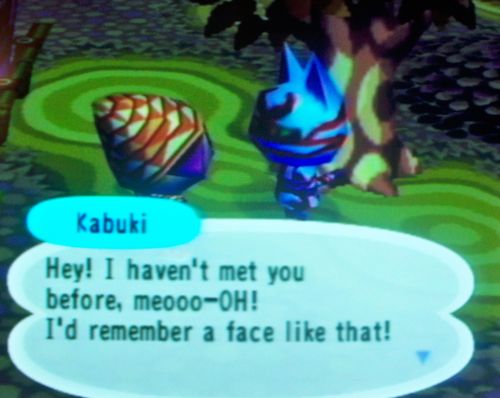 And yesterday I found Kabuki, who’d moved in the day before, making my town full! 😀 It should be interesting to see how long it will take for someone to move, and who it will be, quite possibly one of the villagers who have lived in Ordale over six years.

I was really surprised to see this bulletin board message today! I forgot that AC:GC neighbors did this, but I think I remember now. It’s a really nice touch. 🙂

I thought it might be gone since the message was from yesterday and said if you snooze, you loose — but I found it! 😀

I tried again today in growing a golden tree, I hope it works! Gold trees are part of my plans to make Ordale beautiful.

I’m working on patterns for Dafdilly and Seahaven, but making patterns can take me a while, so bear with me. I hope to be able to WiFi and post about both towns soon. 😀